“Destiny doesn’t mean that your life has been strictly predetermined. Therefore, to leave everything to fate and to not actively contribute to the music of the universe is a sign of sheer ignorance”. 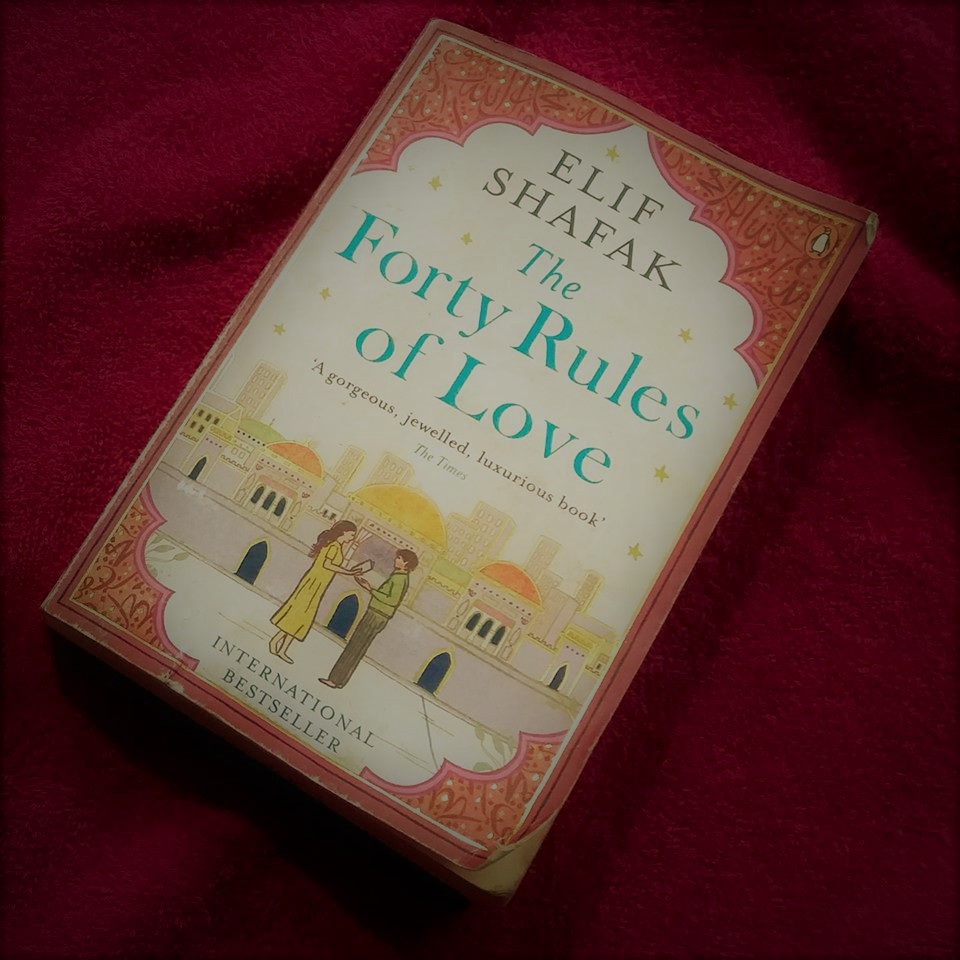 The novel “The Forty Rules of Love” is a spiritual book in which forty rules of Sufism of Shams of Tabriz are elaborated. This book highlights that how Shams changed the life of Rumi from a scholar to a Sufi through love? Shams is a character who is a roaming dervish. He can’t stay at a place for long so he keeps on wandering from place to place. In this novel two stories from two different centuries are running side by side. One is a fiction of the modern era while the latter one is from ancient era is about Sufism. The former is the story of Ella Rubinstein who is a forty years old housewife who is unhappy in her life. She lacks passion in her life. She lives in Northampton. She has a husband named David who deceives her in their marital relationship and has extra marital affairs. Ella knows everything but she remains silent and unconcern. She has three children. Her daughter Jeannette and twins Orli and Avi. Ella was devoid of love in her personal life and she got enchanted with Aziz and his tale. She got by fell in love with Aziz Zahara as she seek his advice at various places in her life and settled all the matters keenly. So it’s true that faith and love turned human beings into heroes because they removed all the fear and anxiety from their hearts.

“Love is the water of life. And a lover is a soul of fire!”

Ella is a kind of literary person who is keen of reading. She got a job as a reader at a literary agency. Her first assignment was to write a report on a book “Sweet Blasphemy” by Aziz Zahara. In novel the book is still unpublished and Ella is asked to write a report on this. First she got hesitated later David encouraged her so she got involved in writing report on the book. Meanwhile her daughter who’s still in the high school had an affair with Scott and she wanted to get married with him. On hearing this Ella over reacted and called Scott to breakup with Jeannette. Everyone in family got disappointed with Ella’s reaction but she told her daughter than she was unhappy in her marriage. Love was lacking in her life. While writing a report on Sweet Blasphemy she exchanged emails with the author of book, Aziz Zahara. Both fell in love with each other. After that Ella turned into a completely different person who found true love and passion in her life. Both characters belonged to different continents.

The similarity between the two stories is that by relationship of Rumi with Shams; Rumi abandoned his all comforts for ecstasy while with relationship with Aziz Ella stepped out of her marriage for spirituality and divine love. Both abandon their everything without even a promise of bright future.

One day David read the emails of Ella and told her that he knows everything about her affair with Aziz also he apologizes her for his affairs when Ella asks him about his affairs. But Ella told him that she loved Aziz. Aziz came to meet Ella both met, spent time together and Ella went with Aziz and left her family. Aziz was suffering from a disease and doctors had told him that he had only sixteen months left in this world. Still Ella chose to go with him even he clearly told her that he couldn’t promise her a bright future. What he could give her was only present moment. At the end Aziz died in a hospital and Ella didn’t go back to her family again. She arranged funeral of Aziz and decided to live life like him.

On the other hand Rumi was a preacher who had a lot of fan following and prestige in society. But as soon as he met Shams; he left everyone including a number of students, his wife kerra and his two sons Aladdin and Sultan Walad. Rumi and Shams had a great bonding. Shams taught him his forty rules and a lot of things. Shams tested Rumi several times and he passed all the trials successfully. He sent him to brothel and tavern still Rumi sacrifices his ego for him. One day he left Rumi alone. In solitude, Rumi became a poet from a preacher. After almost eight months his son Walad brought him back. Shams got married with one of Rumi’s most talented student Kimya. Rumi’s younger son Aladdin wanted to get married to Kimya but it was kimya’s wish to marry Shams because she adored him.

Shams being a dervish thought that he did his worst mistake by marrying a girl as he was not used to family responsibilities. He paid no attention to his wife. Aladdin knew that someone was planning a murder of Shams so he assisted them. The murder was successful but Rumi never forgave his son.

“Fret not where the road will take you. Instead concentrate on the first step. That’s the hardest part and that’s what you are responsible for. Once you take that step let everything do what it naturally does and the rest will follow. Do not go with the flow. Be the flow.”