Hagia Sophia’s conversion to a mosque is a political signal for the dominant global powers. It has nothing to do with Islam. 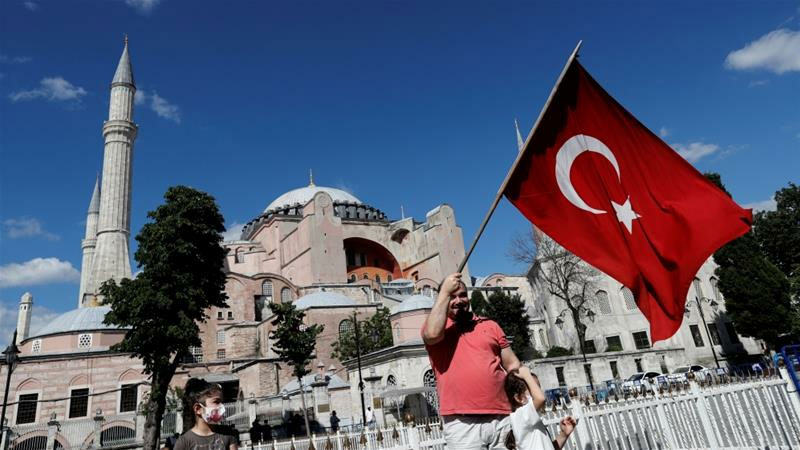 Does Islam allow the conversion of religious sites?

There is no early Islamic precedence of converting religious places to mosques, but that was when Islam was an ascendant power. It is a whole new political ball game when civilisation is being boxed in and trying to fight its way out. The earliest Muslim leaders and Prophet Muhammad made it absolutely clear that there is “no compulsion in religion.” [Al Bakara: 256]

Quran says that God [Allah] protects “monasteries, churches, synagogues, and mosques in the which the name of God is much mentioned.” [22:40]

Prophet Muhammad signed a treaty with the Christians from the city of Najran in his own mosque that read: “There shall be no interference with the practice of faith No bishop will be removed, no monk from his monastery, no priest from his parish.”

Prophet Muhammad’s letter to the monks of Mt Saint Catherine assured them as follows: “They (Christians) must not give anything of their income but that which pleases them — they must not be offended, or disturbed, or coerced or compelled. Their monks [should not be] disturbed exercising their religious order whenever monks, devotees, and pilgrims gather together in church or houses of worship, certainly we shall protect them.”

The Second Caliph of Islam, despite winning over Jerusalem from the Romans in 637AD after a bloody conflict, assured the locals in strict Islamic traditions, “their churches shall not be taken over as residences and shall not be demolished… nor shall their crosses be removed.”

Sultan Salah Ud Din Ayubi conquered Jerusalem in 1187 AD but granted safe passage and the right to live peacefully inside the city, despite the fact that Muslim women and children had been slaughtered by crusaders in the same city a few decades back.

Even Pakistan, which was born out of the trauma of religious hate never sanctioned any conversion of Hindu temples.

So, the precedence is very clear. Islam sees places of worship as sacred, not to be altered, whatever the religion.

On the other hand, there is plenty of precedence of converting mosques to churches. History leading up to Hagia Sophia conversion.

Hagia Sophia was built in 537 AD by Justinian I, the Roman. Hagia Sophia has been largely administered by Greek Eastern Catholics throughout history. It was briefly taken over by Crusaders in 1204 AD and looted of artefacts and desecrated.

Sultan Mehmet had purchased Hagia Sophia from his personal money and donated it to Islamic Waqf or trust. So legally, it has to be a religious property.

In the 1600s, Colonial British and French spread out to the world and build a formidable military machine.

Now that Erdogan has lit the fuse of Muslim expansion, it can only end in either his assassination or Turkish tanks rolling into Makkah city

The Ottoman Muslim conquest ran out of steam at the Gates of Vienna in 1683.

Christian kings regrouped and kicked Muslims out of Europe, immediately thereafter in tandem with a rising western colonial foothold in Muslim lands.

Muslim lands, including Ottoman, faced severe reversals in the Middle East, Africa, and India by local collaborators of colonial British.

WWI and WWII took place between western colonial powers over resources of the world. Ottoman former hinterlands were gradually carved up by British and French victors and dictators were installed. Also, Jewish people settled in Jerusalem again.

General Kemal embraced secularism and western values in 1934; converting Hagia Sophia into a museum, and formally ending the Ottoman rule that was already in decline; with the Turkish Army acting as guarantor.

In 1960, the Turkish Army sent a legitimately elected prime minister, Adnan Menderes, with Islamic leanings to the gallows. Muslims all over the world were brutalised by dictators; taking over \with a Western nod, from legitimate governments to keep Islamic resurgence under check.

In 2003, Recep Tayyip Erdogan won elections from the Justice and Development Party (AKP) platform, based on a conservative voter base.

Western countries have tried several times to topple his government through internal coups involving several institutions, including the Turkish Army. All were repulsed.

Fast forward to the present day, the US is severely hit by the coronavirus. 41 million are out of jobs in the US and economy has contracted by four per cent. The remaining Western world powers, like the UK and France, have sick economies that have run out of steam, exactly the way the Muslim empire had in Vienna.

Why convert Hagia Sophia to a Mosque?

Tayyib Erdogan converts Hagia Sophia, a cathedral of 1500 years to a mosque in 2020, which is meant to reflect this reality.

What will happen now?

Erdogan has started spreading Turkish wings across the former Ottoman lands using the Turkish Army, but this endeavour requires huge wealth, which Turkey can only acquire from abroad.

Now that Erdogan has lit the fuse of Muslim expansion, it can only end in either his assassination or Turkish tanks rolling into Makkah city. There can be no middle ground.

The US, the inheritor of Western Colonial tactics of gaining wealth, and the only remaining guarantor of this crumbling order, is already showing signs of hiding behind walls.

The Turks are lucky that they have a functioning state, with a literate population and a secular constitution.

What to conclude from the Hagia Sophia affair?

Hagia Sophia’s conversion is just a symbol of what’s to come. The real fight is which political system will take up global leadership after the US. Turkish influence, in my opinion, will spread across the former Ottoman lands of Middle East, South-Eastern Europe, including Greece, Hungary and Balkans. Muslims will breathe a sigh of relief after four centuries of global humiliation from the old order.

The time is absolutely right!

The writer is a wing commander (retd)