* The Shah Burj Gate, which is the part of the world's largest picture wall in Lahore Fort, became the main entrance to the fort after the closure of the entrance 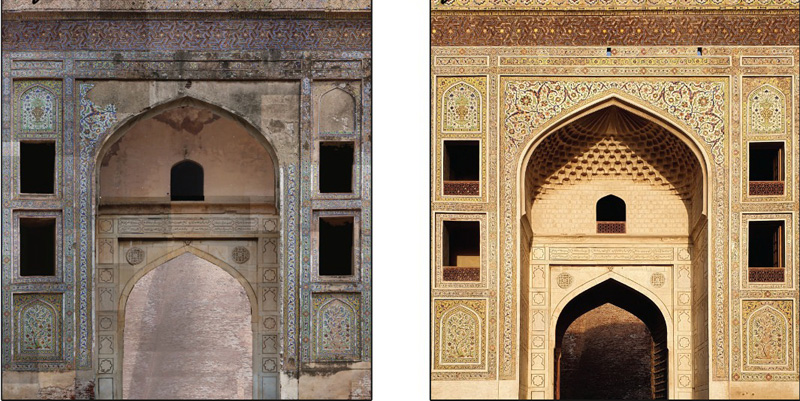 A gigantic gate leading you into the Lahore fort is known as the Shah Burj Gate of Lahore fort. Connected with the pictured wall of Lahore fort this gate remained unnoticed since ages. The tourists just passed by it and they could not even think of admiring its beauty and galore of art.

The Shah Burj Gate, which is the part of the world’s largest picture wall in Lahore fort, became the main entrance to the fort after the closure of the entrance through the Alamgiri Gate which is inside the Huzoori Bagh.

If we go through the pages of history, we get to know that this masterpiece of art Shah Burj Gate was constructed by Mughal Emperor Shah Jahan in 1041 A.H under the supervision of architect Abdul Karim Mamur Khan. The Shah Burj Gate also is known as the ‘King’s pavilion or ‘the royal entrance’.

This Magnificent Gate was used exclusively by the Royalty. I am sure you must be imagining the royal entourages going into the Lahore fort through this gate. The entourages with huge elephants, royal females in flowing silk or velvet gowns or the coming back of the kings and royal men after a victory, this gate would have witnessed all and still could recall those steps. The inscription on the gateway describes a “Divine Throne” that is superior in height, elegance, and purity. This gate surely fits on these merits and gives a vibrant entrance to the grand Lahore fort.

Unfortunately, with the passage of time, this gate became neglected along with the world’s largest picture wall. Over the ages, people and tourists forgot the historic importance of this gate. The colours had faded and the wooden doors had fallen off from their aged hinges and were buried in the soil. The rooms which formed a spacious interior of the Shah Burj gate were filled with waste and debris collected over a period of time. There was no access to these rooms as well. Tourists came and went unnoticing the beauty and remained deprived of admiring its connection with the world’s largest picture wall with infinite colours and patterns.

If we go through the pages of history, we get to know that this masterpiece of art Shah Burj Gate was constructed by Mughal Emperor Shah Jahan in 1041 A.H under the supervision of architect Abdul Karim Mamur Khan

In 2019 the Walled City of Lahore Authority (WCLA) in partnership with the Aga Khan Trust for Culture (AKTC) took up the initiative of restoring this gate. The wooden gate in the arches of the Shah Burj Gate which is almost 30 feet in height had become rotten and was stuck in the soil due to which it could not be moved from its place. WCLA repaired the wooden gate and now it is possible to open and close it with ease. Furthermore, a room adjacent to the gate, which was filled with silt and wreckage was also cleaned up and restored. The officials of WCLA on site said that the restoration and repairs of Shah Burj Gate were being done for the first time and it was shocking to know that such a masterpiece was neglected. WCLA also restored the interior of the gate and made the rooms usable. The structure’s 2,300 square feet exterior surface area consists of recessed panels covered with fine Kashikari (tile-mosaic) work.

Restoration of Gate started in June 2019 with an aim to complete the missing tile work and the iconic Muqarnas inside the dome that is often called “stalactite vaulting” based on the evidence. The Muqarnas is basically a three-dimensional decoration of Islamic architecture. It was initially built to be structural in purpose made out of stone, but later on it became of a more crafted decoration and made of plaster, these clusters niches were used to decorate the area between the wall and the dome.

To carry out the work, the foremost task was completed and comprehensive documentation of the existing conditions was made. Based on the documentation, the restoration strategy was derived by both the organizations. Restoration work was completed in March 2020. The restoration of the façade of the Shah Burj Gate was completed in March 2020 by AKTC and the project was expected to improve socio-economic conditions and attractions for tourists. Great attention to detail was given while restoring the muqarnas of the gate. This is the very first time that a muqarnas in a Mughal monument has been restored in Pakistan.

The project was carried out with generous funding from the Royal Norwegian Embassy, the WCLA, and the AKTC. The project’s focus had been to consolidate and enhance the Kashikari work and the iconic Muqarnas located inside the deep-vaulted gateway. After the completion of a detailed documentation of existing conditions, the gate’s entire surface was cleaned. Restoration activities were prioritized to address issues such as detachment of tile mosaics and loss of glaze. Subsequently, the reconstruction of missing Kashikari work and Muqarnas was initiated.

The restored Shah Burj Gate sheds light on the complexity and beauty of Lahore’s historic fabric. As with its other projects, AKTC believes the Gate can not only promote pride and a sense of identity but that arts and culture in general can promote understanding and collaboration among people, both inside and outside Pakistan, and thereby contribute to peace and security.

The main Shah Burj Gate also leads to the Shah Burj Quadrangle of Lahore fort if you take your way to the elephant stairs. This quadrangle is at the northwest corner of Lahore Fort and was built by Shah Jahan in 1632. This is the place where the Sheesh Mahal and Naulakha Pavilion are located and it served as the residence of the Empress when she visited Lahore.

This gate is a part of the western façade of the picture wall, which is the largest in the world and I think we are lucky to have it here in Lahore, Pakistan. This embellished wall and gate give the tourists a peep into the aesthetics of those times and the love for architecture the Mughals had.

Now the gate has also been illuminated. Unfortunately, due to the COVID-19 situation the Lahore fort is closed for the public. I am sure that once it is opened the tourists will enjoy the restoration and colours of this monument and it will surely be a selfie point for many.

The writer can be reached at taniashahab2016@gmail.com. She Tweets at @TaniaQureshi