‘The Painted Bird’ — unsparing war drama is roughest watch of 2020

* All of which leads to the heated debate surrounding the film 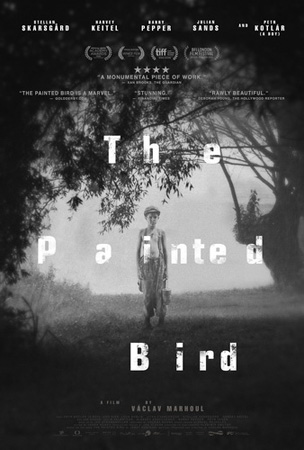 Graphic depictions of traumatic violence and sexual depravity had a good percentage of the audience sprinting for the exits when The Painted Bird premiered at the Venice Film Festival last year.

Now available on demand, this WWII drama may have you running for cover in the privacy of your own home. In adapting Polish author Jerzy Kosi?ski’s bestseller, Czech writer-director Václav Marhoul spares nothing in showing the atrocities witnessed by a lost, abused and abandoned Jewish boy named Joska, as he tries to find his way back home across the ravaged landscape of eastern Europe. The title is drawn from the tale of a peasant who smears white paint on a bird before releasing it to its flock, which no longer recognizes the bird – and thus attacks and kills it. Extending its litany of horrors to nearly three hours, the film is certainly an endurance test. Yet its potent presentation, notably Vladimir Smutny’s striking monochromatic cinematography, gives the film the raw impact of a documentary.

All of which leads to the heated debate surrounding the film. When Kosi?ski’s book, his first, was published to acclaim in 1965, the author did nothing to disabuse readers and the media that he was telling his own story via Joska’s story. An article in the Village Voice was the first to challenge the novel’s authenticity, claiming Kosi?ski and his parents lived in hiding as Christians under false names. This expose took a toll on the author, which may have factored into his suicide in 1991. The note he left behind read: “I am going to put myself to sleep now for a bit longer than usual. Call it Eternity.”

Should questions about The Painted Bird’s truthfulness as a Holocaust chronicle compromise its artistry as an allegory for man’s inhumanity to man?

Not the way Marhoul sees it, which is as an enduring parable about the dehumanizing horror of war. Shot over 16 months, the film presents an enormous challenge to young, first-time actor Kotlár, which he meets with astounding conviction. Though the script uses an Interslavic language so that no specific Slavic nation could claim to be specifically indicted, the boy is given virtually no dialogue. Every outrage must be written on his face, using only his eyes to reflect his tormented soul. It’s a remarkable performance.

From the film’s opening moments, when the boy is kicked and punched by bullies who force him to watch as his pet ferret is burned alive, the brutality visited on the child is nonstop. Left by his parents in the care of an elderly aunt, Marta, who can’t protect him, the boy draws a crude portrait of his family unit holding hands and sends it downstream on a miniature boat with the words: “Come and fetch me.” It’s a flicker of optimism that the rest of film, divided into nine chapters each bearing the name of a person he meets, takes pains to crush.

Should questions about The Painted Bird’s truthfulness as a Holocaust chronicle compromise its artistry as an allegory for man’s inhumanity to man?

After his aunt dies, the boy is thrust into the world like a true orphan of the storm. He’s sold as a slave to Olga, a village faith healer who claims he’s a vampire; the man buries Joska up to his neck in mud while vultures nip at his head. He escapes into something worse in the home of a miller, driven mad by his wife’s carnal come-ons to a labourer. It’s Kier, a master of creepy menace, who gouges out the labourer’s eyes with a spoon and feeds them to his cats, all in view of the terrorized boy.

There’s more, much more. A trapper, the one who paints the bird, treats the boy kindly until the man falls under the spell of Ludmila, a nymphomaniac who makes the mistake of seducing a few, barely pubescent local boychiks. “You want to fuck our kids?” shriek the mothers, who take their grisly revenge on the woman’s private parts. There’s also an incident with a young widow and a goat, as a subplot involving a well-meaning priest, a secret paedophile and revenge. Sexual debasement, which clearly had personal meaning for Kosi?ski, crosses the line into onscreen exploitation here.

No women in the film offer the boy even the temporary safe haven he craves. That comes from two men. The first is Hans, a German soldier who disobeys orders to execute the boy, while grim history whizzes by in the image of Jews on a train headed to a concentration camp. The second is Mitka, a Russian sniper for the Red Army with an eye-for-an-eye philosophy that the boy adopts against an anti-Semite who pushes him too far.

As the war ends, the boy is shown scribbling something on a dusty bus window. It’s not what he writes that matters so much as the effort required for this shattered child to take a tentative first step back to a humanity. Like Kosi?ski before him, Marhoul grieves for that loss. Even as his gruelling film stumbles and overreaches – one-minute wallowing in torture porn and the next arguing against all odds for a resurgence of hope – the writer-director refuses to consign evil to the dustbins of history. Instead, he urges audiences to look inside at what turns us against each other, like the flock that refuses to recognize the painted bird as one of its own. His film is hard to watch. It’s just as tough to forget.