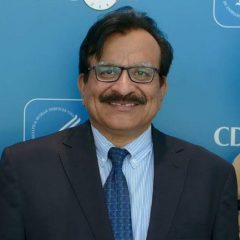 Does Pakistan COVID19 control strategy is based on a reality?

As an epidemiologist who has to oversee hundreds of student’s work which is based on numbers, the first thing we learn is how to pick anomalies of data. I have been asked this question many times by my own students. If someone uses fake numbers in a study how you or a scientific journal could pick this out? There are no hundred percent guarantees that a fake study will not pass through the cracks as recently we have seen in the case of a US company which was able to publish a study on “Chloroquine use in COVID19” in many of the top scientific journals.  But statistics have come up with different ways in which inconsistencies could be picked. That is why once other epidemiologists started looking at those numbers they smell a rat. They quickly identified problems which showed that data presented in this article is just made-up numbers. All journals retracted the articles and the company is in deep trouble.

To aspiring epidemiologists who are carried away with their newly acquired skills of statistical analysis we need to remind them again and again that apart from looking for many errors and biases you also need to look for inconsistencies in data. They need to pay attention to the process of data collection which may be happening hundreds of miles away. If the farthest link in this information generating chain is not working properly all the results and fancy analysis being made could be on very shaky grounds. Even if they see perfect data and statistically significant results still all this needs to make a biological sense too. Dengue is not spread by rats no matter what your data is proving!  That is why critically important for the end user of the data is to keep looking for inconsistencies and then follow back to those who are providing data. Without a regular feedback, no surveillance system could work properly and all the strategy built on those numbers will be based on fallacy. That will endanger the health of the population it is meant to protect.

In 2019 I got the chance to give a talk in the World most respected institute in Seattle, USA which specializes in working with the numbers and then make global estimates of diseases and projections. Institute of Health Metrics and Evaluation (IHME) is the name which you may have heard recently in COVID19 pandemic as its projections are being followed by the White House in the USA and across the globe. There too I raised the same issue about challenges of the sanity of data; if data is being fed into big mathematical equations without considering how this data was collected then the results will be less than accurate. It was a jam packed room and most agreed to it that sometimes sitting far away from actual data collection sites; they do not question the accuracy of data as much as they should.

Pakistan COVID19 situation is improving. We are hearing this not only from the government but also from our colleagues working in different hospitals and clinics. So then what is the problem? Pakistan COVID19 numbers are a problem and no one is trying to fix them.  Are we making up these numbers or we are just sloppy in the way we are collecting these numbers? I don’t have an answer to it but what I am very clear is that Pakistan COVID19 numbers does not make sense. On 19 June Pakistan did more than 31000 test (highest daily) and 21% of these tests turned out to be positive (Test positivity rate). However in just one week on 25th June Pakistan daily test numbers plummeted to 21000 (34% decline) but on the same day test positivity rate also declined to 37%. It was not just a one day mismatch as sometimes it takes days for the result to come back.  However if results were coming later in a few days’ time then the case positivity rate should still  have been increased ( Their results will be added on the days when daily tests were already in decline)   So no matter what there was no way for these two numbers to decline close to 40% in seven days?

Increase in daily testing has been now considered a cornerstone strategy for COVID19 control. A positivity rate of less than 5% is now being pursued globally to minimize reservoirs of infection in the community. The only way all other countries are trying to manage this pandemic is to enhance testing (along with other strategies) which eventually brings down the case positivity rate. Pakistan may have a secret of decreasing daily tests significantly and still controlling COVID19 pandemic? Are we just fooling ourselves? The issue is not that COVID19 in Pakistan is declining or not? It is declining for sure but how it is declining is what we don’t know. The danger of this broken system is that it will not pick the next peak if it comes. The USA controlled its epidemic in Eastern states with around 50,000 deaths, Numbers came down significantly and now a second peak which is much bigger than the first one is rising with around 70,000 daily cases in the USA. Iran controlled the first peak but the second one was also bigger and now it’s case numbers are staying at a higher plateau. True numbers of disease are like military intelligence for disease detectives and warriors. You can’t win a war with made-up intelligence. COVID19 is the third World War and we need to take seriously our status of health intelligence.

Is an Adjunct Professor of Epidemiology at the University of Nebraska, USA and Chief Executive Officer of Global Health Strategists and Implementers (GHSI) a consulting firm in Islamabad