* While fans have seen less of the stars as a result of current events, the couple has not been entirely hidden 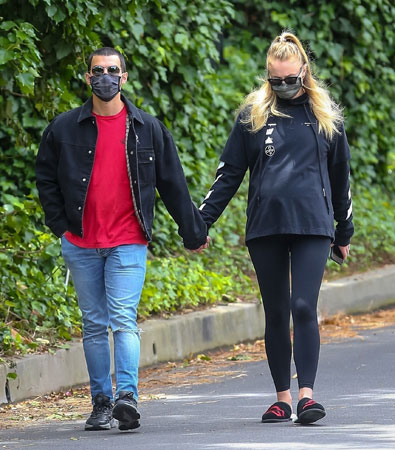 A mom and dad-to-be sighting! One of Hollywood’s favourite future parents, Sophie Turner and Joe Jonas, were spotted out on a walk in California on Thursday along with the Game of Thrones star’s parents and a few furry friends.

At one point, the actress, who donned a flowing white sundress paired with shorts, slippers and a face mask, cradled her visible baby bump. While the celebrity husband and wife have not spoken publicly about their little one on the way, news broke of the pregnancy in mid-February, just weeks before the country began social distancing amid the coronavirus pandemic.

While fans have seen less of the stars as a result of current events, the couple has not been entirely hidden. In May, the expectant pair was seen holding hands on a stroll in Los Angeles with sunglasses and face masks on. The following month, they were similarly spotted out together again in Los Angeles.

This time of year is a special one for the star-studded couple as they tied the knot in a second ceremony in France in late June 2019.

As fans can recall, the two unexpectedly got married in a Las Vegas wedding chapel a month earlier.

As for married life while social distancing, he told Andy Cohen in early April, “I think for us, it is nice to have each other during this time, but I think it can be [different] for a lot of different people.”

He noted, “We got married last year, so naturally just wanting to be together, it’s a really special time.”

And, while they haven’t commented on their baby news, Turner told Conan O’Brien in April that she was “kind of loving” quarantine.

“I’m an introvert. I’m a homebody. Just like, if I could stay at home all day I would, so this is great for me,” she told him. “I leave the house like once a day anyway to walk my dogs and then that’s it.”