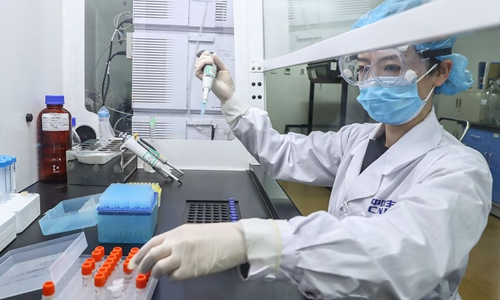 An institute of biological products in Beijing affiliated with the China National Pharmaceutical Group (Sinopharm) announced on Sunday that it had achieved positive results for a COVID-19 vaccine candidate it developed.

The development came as the global number of confirmed patients exceeded 10 million as of 6:30 pm Sunday (Beijing time).

Three of the four inactivated COVID-19 vaccines developed in China evoked positive immune responses in Phase I and II clinical trials, indicating that China has made great progress in the research and development (R&D) of this type of vaccine, experts said.

The Beijing institute, which is under the Sinopharm China National Biotec Group (CNBG), said in a statement sent to the Global Times that all 1,120 volunteers in the first and second phase clinical trials successfully produced high-titer antibodies against COVID-19 after accepting two doses of the vaccine.

The vaccine has proven to be effective and safe, read the statement.

The clinical trials started on April 27 in Shangqiu county, Central China’s Henan Province and were designed as randomized, double-blind and placebo-controlled studies, according to the statement.

Another institute under CNBG in Wuhan, Central China’s Hubei Province, on June 16 announced the results of Phase I and II clinical trials of a vaccine candidate it developed. This provided further vital data for CNBG’s research of inactivated COVID-19 vaccines, read the statement.

On June 23, CNBG announced that it had agreed with authorities in the United Arab Emirates to start Phase III clinical trials for inactivated vaccine candidates CNBG developed. The group did not say which vaccines were involved.

Experts said that if human trials go well overseas, the third phase trial will be closed in August, followed by medical observation in September, with data revealed as soon as October. A vaccine could then be approved for marketing after positive results at the end of October.

Sinopharm is expanding manufacturing capacity for COVID-19 vaccines. One plant in Beijing and one in Wuhan can together produce at least 200 million doses annually, according to media reports.

The plant in Beijing is the largest manufacturing center for COVID-19 vaccines worldwide, reports said.

“Each person needs two doses of the inactivated vaccine to evoke an immune response, and 200 million doses would only meet the immunization needs of 100 million people. This is still far from enough for China and the world at a time when vaccines are urgently needed,” Tao Lina, a Shanghai-based vaccine expert, told the Global Times on Sunday.

Except for live attenuated influenza vaccines, all four types have entered human clinical trials, showing that the progress of R&D for COVID-19 vaccines in China is markedly faster than in the US, analysts noted.

“The World Health Organization (WHO) expects 2 billion doses of vaccine to be available worldwide by the end of 2021. Inactivated vaccines alone will certainly not be enough,” Tao said.

The WHO released plans on Friday that target delivery of 500 million tests to low- and middle-income countries (LMICs) by mid-2021, 245 million courses of treatments to LMICs by mid-2021, and 2 billion vaccine doses, of which 1 billion will be purchased for LMICs by the end of 2021.