* The names are many like Ahmad Nadeem Qasmi, Khalida Hussain, Rasheed Amjad, Mansha Yaad and Nilofer Iqbal from the era 1997 to 2003 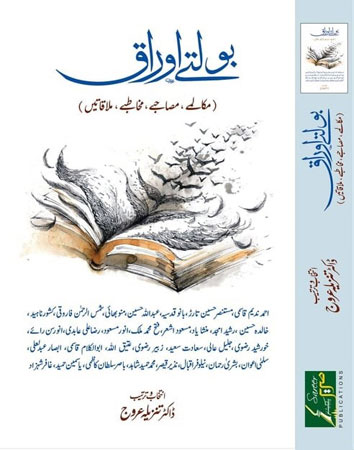 Dialogue, interviews, sketches, meetings etc are means of not only taking the best out of a creative person but also go into depth of some burning issues for us to learn from the ensuing wisdom.

That is what Tanzeela Arooj has accomplished by compiling and editing interviews, dialogues, meetings, encompassing the creativity of an intellectual from the internationally acclaimed literary journal ‘Tasteer’ from 1997 to-date in the book titled ‘Bolte Auraq’. Tanzeela disclosed that the title of this book was proposed by none other than Naseer Ahmad Nasir, the editor of ‘Tasteer’. Reading 336 pages and living with the interviewees has been a memorable and illuminating experience for this reviewer.

The book under review opens up many concepts; social, political, philosophical while conversing with an intellectual. The names are many like Ahmad Nadim Qasmi, Khalida Hussain, Raasheed Amjad, Mansha Yaad and Nilofer Iqbal in the era 1997 to 2003. The brainstorming with all these celebrities opens up vistas of many horizons.

This review comprises Part 1 of the book. Excerpts from discussions with eminent scholars are given below.

AHMAD NADEEM QASMI — journey from Pirzada Ahmad Shah to Ahmad Nadim Qasmi was simple that he did not believe in being a ‘Pir’ despite that he hailed from a Pir family. ‘My short stories ‘Bain’ and ‘Chubban’ are a proof of the treatment imparted by Peers to their followers and he abhorred Peeri-Mureedi stated Qasmi Saheb to Qurat ulain Tahira. From his village Anga, district Khushab; he travelled to Bahawalpur via Campbellpur and Sheikhupura in his youth. The conversation was focused on Qasmi as short story writer. About Shams Ur Rehman Siddqui’s comments that ‘Prem Chanvi’ Afsana had negative impact on young writers, Qasmi disagreed that in the process of writing by use of metaphors did create some masterpieces but running away from realism did have a negative impact on short story writing. About Progressive Writers he named Sajjad Zaheer and Professor Ahmad Ali foremost followed by Ali Sardar Jafri and Syed Sibt-e-Hassan. Faiz was a poet of higher echelon, so his participation cannot be recognized. Both he and Professor Ahmad Ali lost interest after Pakistan came into being, stated Qasmi. About the writers of today, he felt that they are lucky that even if behind bars they are not subjected to C Class jails as in Martial Law days. About Faiz and Faraz, Qasmi said they themselves opted to live abroad in difficult times and were not ‘Jilla Watan’ in its true spirits. About future of Urdu Afsana he declared only that approach viable that is descriptive like what Chekhov, Maupassant, and Somerset Maugham wrote.

Journey from Pirzada Ahmad Shah to Ahmad Nadeem Qasmi was simple that he did not believe in being a ‘Pir’ despite that he hailed from a Pir family. Short stories Bain and Chubban are proof of the treatment imparted by pirs to their followers and he abhorred Peeri-Mureedi stated Qasmi Saheb to Quratulain Tahira

MUSTANSAR HUSSAIN TARAR — while in conversation with Qurat ul Ain Tahira, renowned novelist Mustansar Hussain Tarrer stated that Punjabi language has powerful expressions because it is a big and an ancient language. Since Pakistan needed one language at the time of its creation, Punjabis sacrificed and disowned their language in favour of national language Urdu. Dr. Syed Abdullah did not converse in Punjabi. Mukhtar Masood belonged to Gujrat but always spoke in Urdu. Mustansar felt that since her mother spoke excellent Punjabi with use of proverbs, he could have written better in Punjabi language. He said that his characters in his novels are extremists so the metaphors used in Urdu language are not an option. Mustansar believes that writing in Urdu is an obsolete approach now. He also wrote in Urdu as he thought he would have larger audience but for that his output needed translations into French, Spanish or English languages. Many established started writing in English like Abdullah Hussain for larger audience.

Mustansar elaborated that he tries to live in the distant past if his characters belong to that era. He was referring to his novel ‘Bahao’. If one studies the old civilization, one of the first things that come in one’s notice is the utensils. If you go to Harappa and Mohenjodaro, the making of a utensil is the same as pot makers does it today. Often you would find a fish engraved on a drinking pot as it was symbolic then and even now. Regarding the idea of ‘Bhao’ was drying of rivers that did not dawn upon the public in general but to a man who thought it his duty to inform his fellow beings. This metaphor could represent a civilization being dried up gradually unless actions are taken to undo this disaster.

KHALIDA HUSSAIN — the conversation of Tahira Ghori and Quratul Ain Tahira with Khalida Hussain, the renowned writer discusses the opening up and acceptance of metaphorical stories as against descriptive ones. One’s taste changes with time and experiences. To Khalida, Faiz as a poet was her favourite when she was in class twelve. When she read Ghalib, she preferred Mir and Ghalib as against progressive movement poets. Khalida Hussain writes to take her out of a particular state of mind. She realizes that may be she does not end up in attracting readership but still continued to write. God has given her a special sense of looking behind and beyond the material things. She resisted writing a novel but wrote the first chapter which shall compel her to finish it.

MUHAMMAD MANSHA YAAD — initially, Muhammad Mansha’s interest was in saying poetry and he kept his ‘Takhalus’ as ‘Yaad’, so this word was added in his name. Gradually his interest drifted toward fiction writing especially short story writing as he thought that one day he would return to saying poetry so he kept using his ‘Takhalus’ as a part of his name even when he was a fiction writer. Asked a tricky question as to whether it was an art writing the Ayaet ‘Qullowallah O Ahad’ on a grain of rice, Mansha said the best use in that case would be making a ‘Taweez’ of it. It is craftsmanship. As far as Mansha was concerned he desired to pass on what he desired to say in a creative manner, briefly and with the use of metaphors but he did not desire not to make his message reach his readers.

DR RASHEED AMJAD — Rasheed Amjad started writing in 1960 when he was timekeeper in 501 workshops. After filling forms he used to read a book. He saw another colleague Ijaz Hussain doing the same. They started exchanging books. One day he showed one of his stories he had written, Rasheed did the same and the process continued. They started moving in a group where the senior writer Nisar Nasik used to give them words of wisdom. They formed a literary organization namely ‘Bazm-e-Mir’. That is how a star was born. His first story Lamp Post was published in ‘Adab-e-Latif’.

A very interesting dialogue with Rasheed Amjad appears with Umar Farhat. He shot at Rasheed Amjad as to what was linguistic movement to which Rasheed responded that Jillani Kamran in his poetry collection had mentioned that some of the words used time and again had become hackneyed. So there was need to look at these words with new angle. Basically these observations pertained to Nazm but Afsana came in the way also. About the query that ‘Jadidiat’ was born as a reaction to Progressive Writers Movement, Dr. Rasheed responded that a new movement takes birth from the previous one like Ali Garh was the first movement out of which Romantic Movement took birth when the three elements, simplicity, aims, and use of brain became cliché. Its extreme gave birth to Progressives. Prem Chand involved a normal person in this movement. Extremism created hurdle in its growth. Psychology, sex and spiritualism were discouraged. Manto, Ghulam Abbas and Mumtaz Mufti were debarred from being printed in the magazines. Reactionary forces brought in modernism and internal realism gave way to external realism. Each decade brought a change.

NILOFER IQBAL — established short story writer Nilofer Iqbal said that metaphorical stories are a starter for descriptive stories. Single layer story if replaced by many-layered stories bring metaphors automatically in it. Her short story ‘Barf’ was an indicator of cold war between two social strata. The story ‘Ghora Gari’ is a break away from pain. Bouncing balls is a metaphor of life and cull de sac was an indicator of cowardice and defeat.

A lot of opinions have been offered by the intellectuals interviewed. Almost half have been covered in this review; the rest shall follow in Part 2.