The Afghan peace process initiated in 2018, marred with episodic halts, finally witnessed an agreement between the US and Taliban on February 29 in Doha. Both signatories Taliban and the US agreed to some core conditions and compromises to be made. Afghanistan, a land known as the Graveyard of Empires has become a huge quagmire for the US forces and now even after 18 years of war they are still nowhere close to defeating the Taliban. Eventually Taliban had to be accommodated in the US strategy for Afghanistan. The Taliban are still stronger on the ground. There have been occasions even after the deal when Taliban were found to carry out attacks to show off their military strength and presence. This sends out a message to the US that a reduction in violence may not be confused with complete termination of attacks. Taliban being fully aware of their limitations as a disciplined troop, realize it would be hard for them to bring back their militia into the region if peace process doesn’t settle desirably. Geographically Afghanistan is at the crossroads of Central Asia and South Asia and is also bordered with Middle Eastern states. Such geographical presence makes everything happening in Afghanistan reach a dozen of adjacent countries with great intensity and magnitude. Recently concluded agreement in February this year has offered a world to witness a historic moment in which parties at dispute are finally making adjustments to end this protracted war. This agreement will have far reaching impact on many regional countries which will be compelled to respond according to their interests and likely benefits. 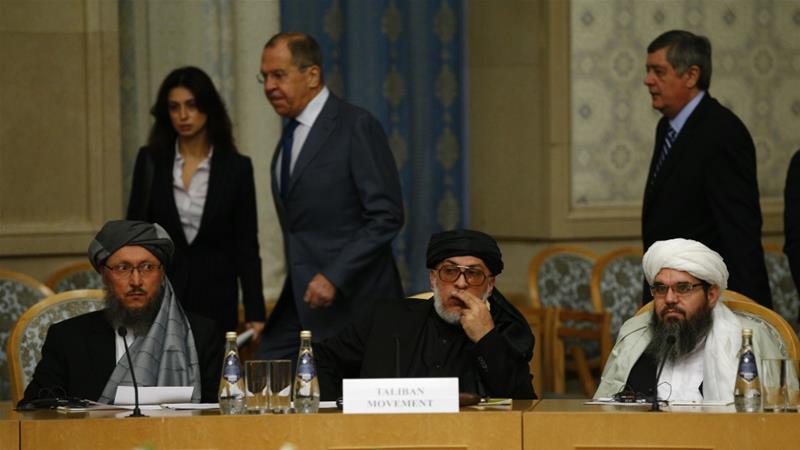 Most recent development in the Afghan peace process is the induction of a “Power sharing Deal” between Ashraf Ghani and Abdullah Abdullah. The power sharing deal is a political settlement wherein both Ghani and Abdullah are looking forward to sharing the burden together in a hope to pave a path to peace, improved governance, human rights, laws, values eventually moving towards successful materialization of Afghan peace process to have stable Afghanistan.US secretary of state Mike Pompeo also supported this political settlement to end the conflict. In the meantime, Secretary-General of NATO Jens Stoltenberg applauded the deal between Ghani and Abdullah.

This, however, wasn’t an easy feat. The US had to nudge the naysayer: India in this case; for its negative and its covert activities to derail the peace process. India finds a stable Afghanistan unfavorable to execute its illicit activities and propaganda. There would be fewer chances to exploit the soil of Afghanistan for its vested interests. Zalmay Khalilzad, the US Special Representative for Afghan Reconciliation, had a meeting with Indian External Affairs Minister S Jaishankar in New Delhi and conveyed the firm message for India to shun its anti-peace role in Afghanistan. Chief Negotiator of Taliban, Abbas Stanikzai also criticized India stating “India has always played a negative role in Afghanistan. India supported traitors in the country”.

Such Taliban sentiments are prevalent but rarely expressed. Afghan government/NDS and RAW has consistently opposed peace with the Taliban as both stands to gain from discrediting the Taliban. Therefore, depicting Taliban as violent and active propaganda showing them as unreliable to firmly handle the evolving situation, serves Indian interest. Coupled with all this, a delayed withdrawal of US troops and attacks still being carried out in Afghanistan fueled the violent situation to the relief of spoilers of peace that want to see the peace deal completely derailed.

India’s Afghanistan policy is very much Pakistan-specific. India doesn’t want peace in Afghanistan because unrest on Pakistan’s western border makes it doubly challenging for Pakistan to secure its borders on two fronts. India backed anti-separatist elements get free flow across the porous Durand line into Baluchistan. This is the very reason India never favored a peaceful political settlement between Taliban and Afghan government. Some Indian analysts such as former Foreign Secretary Shyam Saran openly argue that Indian policy should aim at preventing complete Taliban takeover of Kabul, provoking Taliban towards a broad-based government.

While India remained active in hampering the peace process, globally Pakistan’s key role in the entire peace process has been highly appreciated. Zalmay Khalilzad US Special Representative for Afghanistan Reconciliation praised Pakistan’s efforts for the deal. Moreover, Pakistan’s role in the peace process is also recognized by Russia, China, and the Afghan Taliban. Pakistan has made several efforts to bring the Afghan Taliban to the negotiating table with the US which eventually resulted in the much awaited peace agreement and has become a ray of hope for the stability of Afghanistan and region as well. There is no doubt this peace deal is in the interest of Pakistan and peace of region because stable Afghanistan means stable Pakistan. Moreover, there are now brighter prospects for lesser clashes near Durand Line between Pakistan Armed Forces and Afghan Forces .Afghan forces have been time and again attacking Pakistani forces near the Pak-Afghan border. It is hoped that the new political regime will also help in maintaining border peace between the two neighboring countries. However, one has to keep looking out for possible Indian mischief as it doesn’t want peace to prevail in Afghanistan.