Last month, Prime Minister Imran Khan announced country’s biggest emergency cash programme under which Rs 144 billion are be disbursed to 12 million beneficiaries. The World Bank has praised the PTI government’s Ehsaas Welfare Programme, and its effectiveness in providing aid under the critical threat environment formed by the sharp spike in COVID-19 infections. The World Bank has urged considering making this method central to the national strategy to help people affected by the crisis, with statistics citing 24% of the 210 million population reported as being below the poverty line. Ehsaas represents a broad poverty alleviation programme with a variety of individual modules numbering around 115, including initiatives such as the National Poverty Graduation Initiative [NPGI], which will enable sustainable livelihoods for people below the poverty line, with key elements, including skills/vocational training, interest-free loans, and asset transfer, based on the core policy principle of ‘redistribution’ being used in most welfare states.

This program’s core function involving the disbursement of loans will be a key to Fintech development. Initially, the government’s response scaled up their flagship welfare program, Ehsaas Kafalat, including 7.5 million more vulnerable families, increasing their budgetary needs by 85% for cash transfers. Next to this was expanding the reach of the Benazir Income Support Programme by 4.5m women. Applicants to state backed welfare systems are automatically screened through the National ID database which covers any KYC concerns, and the usage of bio-metric identification methods are considered to be state of the art by commentators.

Every month, 80,000 interest-free loans will be disbursed through more than 1,000 loan distribution centers set up in around 100 districts

The amount raised by the PM’s direct appeal for fundraising, i.e. approximately Rs 550 million was no mean feat, but consider this in context of the need for nano/microfinance across the entire population of 210 million people, where the government’s lack of funds lead them to appeal to a diaspora for an amount which is less than GBP 3 m. Fintech unicorns like Monzo, Revolut, and N26 annually complete funding rounds in the hundreds of millions, not out of merit, but from sheer investor appetite to see them challenge traditional high street banks. From a context of financial inclusion and Fintech development, we see the ability of governments to make a lasting difference is minuscule in relation to the ability of commercial entities. A government with no experience, and in the context of global crisis, had to hurriedly scramble through the process of a) stakeholder engagement. b) conducting customer due diligence to identify legible segments, then c) initiating digital settlement to provide the necessary financial services- all of which are basically the core functions of virtual banking entities across the world. 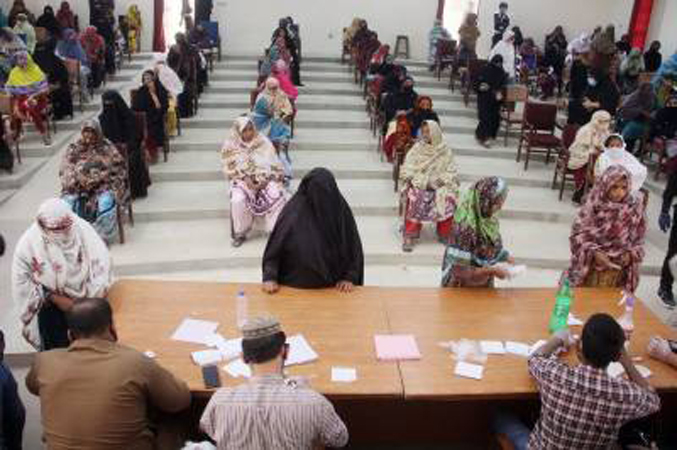 The general format is that every month, 80,000 interest-free loans will be disbursed through more than 1,000 loan distribution centers set up in around 100 districts. The coordination of beneficiaries with the NADRA offices has been perceived as a landmark achievement by Sania Nishtar, although on a tech level it is a logical necessity of managing the project’s core data. Although the usage of bio-metric verification has been hailed by the PM’s Special Assistant for Social Protection as being a state of the art process, Sindh Chief Minister Murad Ali Shah has raised concerns over the risks of using bio-metric identification methods due to infection via multiple usage of thumbprint based scanning devices. The current system does not allow a recipient to receive the Rs 12,000 in funds except after their confirmed verification through NADRA, even though there may be other technological solutions for identity verification available. Dr Nishtar celebrates that the ingenious biometric solution prevents individual recipients stealing one another’s funds, as they would do if it simply operated through ATM cards. However, theft of funds by the people operating the actual centers was not anticipated.

The question of method is thus a pressing concern amidst the chaos caused by COVID-19, with far reaching implications for two of the government’s central programs, Ehsaas and the ‘Digital Pakistan’ program, neither of which pay any significant attention to Fintech adoption policy. Several issues have emerged in recent news highlighting that the current mechanisms for cash disbursement, which is now to be a permanent fixture in welfare policy, are being operated in less than optimum conditions. Objectives of Ehsaas were tied in closely to the UN SDGs and the World Bank’s ‘Financial Inclusion’ agenda and the urgency to deliver initiatives under this context has been accelerated by the pandemic. Now, however, the issues related to mismanagement and risks to human life have shed light on a neglected avenue of development, being rapid promotion of disruptive digital financial services.

Technically, one is only supposed to visit the centers after receiving a confirmed text message from the 8171 line, many are swarming at the centers without following this rule, the same way many are flocking at hospitals for testing without recommendation by a doctor. Risks associated with a large crowd of people gathering at cash distribution centers are quite apparent, all using the same thumb recognition devices. In Multan, an elderly woman lost her life in a stampede at one of the centers, with 20 others injured. Police are responsible for a situation devoid of enforcement of social distancing or basic crowd management techniques. Despite a burqa-clad Dr Sania Nishtar visiting one particular distribution center ‘incognito’ to ensure COVID-19 safety precautions and a welcoming atmosphere, many sources show a truly mismanaged operation taking place.

Exploitation of the generally poor management of the Kafaalat programme has opened the door to the agent cartels, the middle men, we all wanted to get rid of following the launch of PSO-PSPs a few years back. One of the key founding objectives behind licensing of NBFIs was the eradication of this unnecessary layer, and allowing payment processing to take place directly between the accountholder and verified by the trustee bank and NADRA. Paradoxically, the State Bank asks EMI applicants to describe in their strategic proposals, what assets are possessed under people resources, of which an example is given i.e. agent network. A consequence of allowing the corruption of agent cartels to continue unchecked over this period of time has allowed exploitation of the worst affected population segments. In one scenario, agents were reported arrested for deducting service charges of sums near Rs 1,000-2,000 from the aid recipients in Mehar and Johi towns. Elsewhere, two were arrested in Tando Allahyar for charging Rs 500 of service fees, and another five in Umerkot. In Larkana, women reported that cash counter workers were ‘working in collusion with the agent mafia’, taking Rs 1,000 as service charges.

Due to the change-resistant and bureaucratic structure of Pakistan’s administration, and in an effort to prevent loss of life and the further destabilisation of the country, there is a need to draft and enact hybrid risk protocols, in the event that there are crises which have an effect across the spectrum of state/social apparatus, consisting of Military, Political, Economic, Civilian and Information capabilities of a nation. The hybrid warfare paradigm calls for a whole of nation approach to addressing high level threats, and requires enabling of all national assets to respond to crisis scenarios that average civil servants are not used to operating in.

The mid-March lockdown was necessary as part of a larger strategy to help contain the health emergency, but the cost of health security has exposed and compromised economic security. Cash disbursements are only a temporary solution to assist the most underprivileged, they need to be allowed to conduct their trade online, and rapid innovation and provision of e-commerce solutions should be a priority for the team under the ‘Digital Pakistan’ initiative for long term sustainability. Unable to follow the latter course, the masses of daily wage workers are compelled to seek welfare, under conditions which will spread infection, and then accelerate the cycle of economic decline for those most ill-affected.

Fortunately for Pakistan the back-up solution offered by NBFIs as alternate delivery channels for financial services can be considered a test exercise to gauge national capacity to respond via projects geared towards dealing with human crises, licensed by regulators. It means that the general formula of allowing 3rd party entities to participate in providing services in a situation of crisis or need can be replicated if necessary. There must alternate pathways in terms of delivery methods selected by the government, but above all else, bureaucratic obstructions to crisis management must be eliminated.

This is the first part of a two part series by Syed Nameer Ahmed, a research consultant working with a financial services technology group