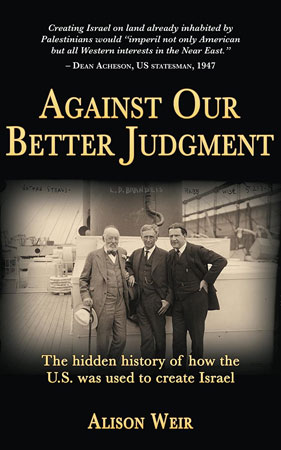 Alison Weir’s relatively short book covers the history of Zionism in the United States from the last decades of the 19th century until the creation of the state of Israel in 1948. (She is working on a second volume that will carry this history to the present.) Its brevity does not mean, however, that it is in any sense superficial, as it brings out key historical information, all well-documented, that sets the stage for the troubled world in which we now live. While histories of Zionism have usually focused on Europe, Weir shows that American adherents of this ideology have been far more important than generally has been recognized.

The basic theses of this book are encapsulated in the title and sub title.

The history of how American Zionists used America to create Israel was “hidden” in two respects. First, it was “hidden” in the sense that American Zionists often worked behind the scenes. More importantly, however, that history is known but has been kept hidden from the general public, who rely on the mainstream media, and exists almost exclusively in works produced by small publishers-often of a scholarly bent-read by only a few. As Weir points out, those who have tried to bring this information to the general public have suffered both venomous verbal attacks and economic threats that quickly silence the message and often destroy the messenger. This treatment obviously serves to prevent others from doing likewise. Many ask about the role of the United States in the creation of Israel. The book under review provides an unequivocal answer: the United States was instrumental in the creation of a Jewish state in the Arab lands of Palestine at the expense of its inhabitants who were there for centuries. Yet, the book shows how pro-Israel American Zionists have manipulated the government, the media to promote the interests of Israel at the expense of the interests and ideals of the United States. The book sheds a new perspective unknown to many about the manipulations of the pro-Israel group in the United States and Great Britain. It is a ‘must read’ for the general reader as well as for the scholar.

None of the established book publishers in the United States is publishing the book under review. Its copyrights are the property of the author Alison Weir, the Executive Director of an organization called “If Americans Knew.org”, or “What every American needs to know about Israel/Palestine”. The organization has its logo on the book’s spine and back cover. The low price is an indication that the publishing organization does not have the same overhead costs of established publishing houses!

The author is also the President of another organization called the Council for National Interest (CNI), an organization founded by two former US Congressmen Paul Findley and Paul McCloskey. Both organizations are devoted to the advocacy of a US foreign policy in the Middle East consistent with American interests and not those of a foreign power, i.e. Israel.

The contents of the book are probably the reason why no book publisher in the United States would consider publishing it because of the explosive and meticulously documented information about the duplicity and outright illegal if not criminal behaviour of the Zionist movement in the United States, Europe, and of course Palestine. The book was originally a paper to set the record straight about the US-Israel relationship (p .iii). However, “the article grew longer and longer as [she] realized how much there was to be explained” (p. iii).

As she received more information that needed confirmation and as further research confirmed such received information and uncovered more facts “the article became a book” (p. iii). The gist of the argument developed in the book is that the pro-Israel movement in the United States “has promoted policies that have exposed Americans to growing danger, and then exaggerated this danger (while disguising its cause), fueling actions that dismember some of the nation’s most fundamental freedoms and cherished principles” (p. 2).

She tersely adds, “All this for a population that is considerably smaller than New Jersey’s” (p. 2). It is a short book covering sixteen chapters and a preface. Its 241 pages include 94 pages of text, and surprisingly 109 pages of endnotes, a bibliography of 24 pages, an extra list of readings not necessarily quoted in the book (3 pages), and 10 pages of ‘index’.

Yet, this short book is quite powerful and displays historical accounts and analyses supported by a solid documentation showing scholarly knowledge and objective reporting.

Zionist leaders’ “mixed reaction” to Nazism, with some seeing that the convergent goals would benefit a Jewish state that required a Jewish population;

Secret American Zionist clubs (including the elite Parushim with Felix Frankfurter) which pledged to work for Israel behind the scenes; Creating the myth that a refuge was needed for Jews (including falsifying anti-Semitism in Germany and Poland and, more importantly, sabotaging western countries’ efforts to open their doors to Jewish refugees after WW II in order to ensure that Jews had few choices of refuge outside of Israel); and Zionists’ role in the creation of Christian Zionism and the Scofield Reference Bible. Weir ends her short history of Israel’s creation by documenting some key examples of how Israel-firsters were able to destroy the careers – if not the lives – of prominent Americans in government, journalism and academia who warned of the loss of American credibility in supporting a state that was based on religious discrimination.

Weir keeps her book focused on the early history of Israel, ignoring highly significant later events, particularly those concerning Senator William Fulbright: his uncovering of Jewish charity fraud that recycled charitable donations into US propaganda, his attempts, with JFK, to force the main Zionist organization to register as an agent of a foreign government (which ended with JFK’s assassination) and the loss of Fulbright’s Senate seat to the then-unheard of Dale Bumpers.

The main messages from Weir’s history are that the Jewish community has not legitimately needed a homeland- refuge from anti-Semitism and that Americans must take back their country by insisting that their elected officials place the interests of the United States before those of Israel.

The writer is a student based in Shahdadpur. He can be reached at syedtahir926@gmail.com