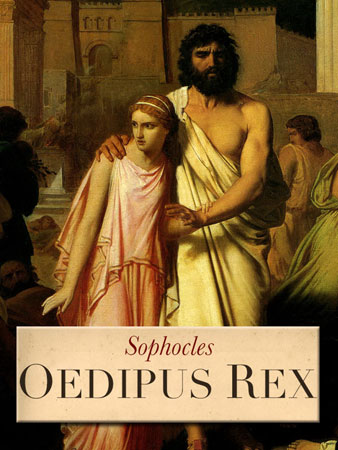 “Oedipus Rex,” a popular play written by the famous author Sophocles, was produced in Athens, Greece, in 430 BC.

The play consists of 4 episodes. Sophocles has adopted Aristotle’s tragedy model in his play.

Basically, tragedy means that the protagonist presented in the play is better than ordinary human beings. He commits a great sin which results in Hamartia and for this purpose the hero regrets or dies at the end of the story. As such, the work is considered the perfect version of a tragic drama.

The story revolves around Oracle’s prophecies because Greek superstitions were widely believed by the Greek people. Two themes of confrontation, “Fate” and “Free Will” dominate the play. The king and queen of Thebes State are told that their son will kill his father and marry his mother. To unveil the prophecy, the two decided to kill their son. They then hand his son over to a shepherd who works at their palace. The shepherd is told to swallow the baby’s feet and kill him somewhere in the wild mountains. The next morning the shepherd went out into the fields with his flock and innocent baby. He swallowed the baby’s feet there, but suddenly fell in love and felt sympathy and compassion for this innocent child. He decided not to kill the child, but to hand over the innocent to his shepherd friend who belongs to another state (Corinth). The baby was adopted by a friend, and taken to Corinth.

Shepherd was a servant of the king of Corinth, so in the palace, the king and queen of Corinth became attached to the child and decided to adopt the child. He was also childless, so, he thought his child would be his best descendant. They attributed the baby to Oedipus, which means, “Swallowed Feet.”

As the years passed, Oedipus grew. Once at a party, a fire broke out between Oedipus and a drunkard.

The story revolves around Oracle’s prophecies because Greek superstitions were widely believed by the Greek people. Two themes of confrontation, ‘Fate’ and ‘Free Will’ dominate the play. The king and queen of Thebes State are told that their son will kill his father and marry his mother

The drunkard told Oedipus without any sense that he was not the son of Polibius and Merope, the emperors of Corinth. Oedipus, startled, went to his parents, asked them the truth, but they fainted.

According to Greek mythology, Oedipus consulted Priest to find out his identity. The pastor revealed that he would kill his father and marry his mother, but did not say who his real parents were.

Oedipus thought without hesitation that he should leave Corinth to skip prophecy. He left Corinth. His homeland was on the way to Thebes, but he did not recognize it. Where the three roads meet, he had a quarrel with a few people who were the bodyguards of a king. He unfortunately killed four of them, including the king, unfortunately the one who was Oedipus’ real father. He did not think for a second that the king or any of them could be his father. One of them managed to bounce. In Thebes, a strange creature, the Sphinx, was a mystery to the inhabitants. No one could match it. Oedipus is confronted by the Sphinx, riddle of the Sphinx responded by Oedipus, and as a reward, he is appointed King of Thebes and marries the Queen, who has recently lost her husband.

Shortly after Oedipus, ‘ reign, a plague swept through the world of Thebes State. Oedipus began searching for King Louis Murderer, who was in Thebes and reason behind the plague but he did not know he was himself. Oedipus ordered his brother-in-law Creon to consult priest and ask him Murderer’s name. When Teraisis, a blind prophet, arrives at the palace, Oedipus asks him the name the polluter. Teraisis knew that it was Oedipus who was Louis Murder and the reason behind the plague. Oedipus later accused Teraisis of not telling the truth. He called him a blind prophet who could not even see how he would know his fate. Then, in return, Teraisis tells, You, Yes, you are the polluter of city. Then the meeting gets dismissed.

In later parts of the play, Jocasta told Oedipus about her prediction, which Oracle had made about his child. Oedipus is amazed and remembers the prophecy that Priest told him in Corinth that he would kill his father and marry his mother. Moreover, to know the absolute truth, they call the shepherd whom Oedipus was given to kill. He was the one who escaped while King Oedipus killed King Louis and four others unintentionally.

In the last days of the play, when Oedipus learns that this prophecy has been fulfilled, that he has killed his father (Polybus) and married his mother (Jocasta), he blinds himself to the brooches of Jocasta’s clothes. Jocasta too hanged herself for marrying her son.

Therefore, we can see that Oedipus was the bearer of his tragic destiny through the actions, and beliefs of every religious scholar and other person. Oedipus led the right life that was foretold and foretold.

Destiny who returned Oedipus to his native land (Thebes), Oedipus killed five people alone, ultimate correct answer to Sphinx, appointed as king, married to Joacasta, his life was controlled from head to toe by a well-known force, “Destiny.” There is no doubt that those three roads meet Oedipus, his father and his mother, from whom this prophecy came. In fact, “Fate” is so complex and confusing for us that we now even living in the 21st century are considered puppets before this term.

Oedipus Rex, also known by its Greek title, Oedipus Tyrannus, or Oedipus the King, is an Athenian tragedy by Sophocles that was first performed around 429 BC.

Originally, to the ancient Greeks, the title was simply Oedipus, as it is referred to by Aristotle in the Poetics. It is thought to have been renamed Oedipus Tyrannus to distinguish it from another of Sophocles’s plays, Oedipus at Colonus. In antiquity, the term “tyrant” referred to a ruler with no legitimate claim to rule, but it did not necessarily have a negative connotation.

Of Sophocles’s three Theban plays that have survived, and that deal with the story of Oedipus, Oedipus Rex was the second to be written. However, in terms of the chronology of events that the plays describe, it comes first, followed by Oedipus at Colonus and then Antigone.

Prior to the start of Oedipus Rex, Oedipus has become the king of Thebes while unwittingly fulfilling a prophecy that he would kill his father, Laius and marry his mother, Jocasta. The action of Sophocles’s play concerns Oedipus’s search for the murderer of Laius in order to end a plague ravaging Thebes, unaware that the killer he is looking for is none other than himself. At the end of the play, after the truth finally comes to light, Jocasta hangs herself while Oedipus, horrified at his patricide and incest, proceeds to gouge out his own eyes in despair.

Oedipus Rex is regarded by many scholars as the masterpiece of ancient Greek tragedy. In his Poetics, Aristotle refers several times to the play in order to exemplify aspects of the genre.

The writer can be reached at yasirjamalmahar3@gmail.com