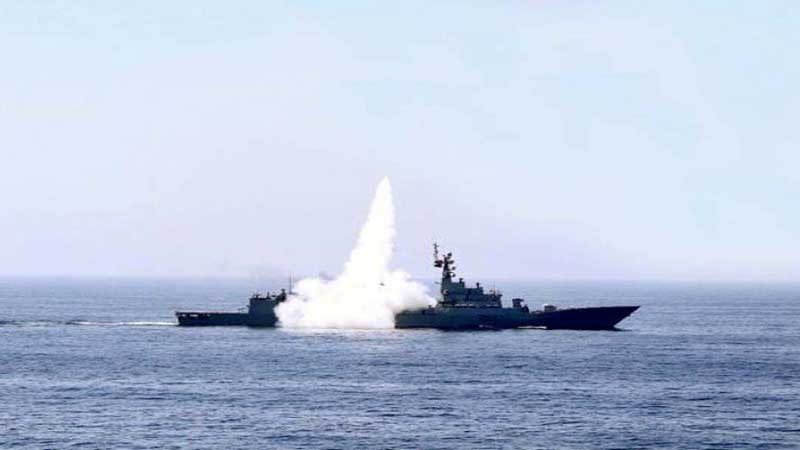 One of the most famous quotes about black propaganda is from Nazi leader Adolf Hitler “If you tell a big enough lie and tell it frequently enough, it will be believed”. Propogating falsehood in order to achive your goal, is the underlying principle of major propaganda efforts. No where is this principle observed better than in propaganda efforts of India with respect to its neighbors, especially Pakistan.

The most recent of these attempts is seen in the widely circulated, year old, Economic Times article on social media. It commends Indian Navy for reducing Chinese submarine presence in the Indian Ocean and forcing Pakistan Navy to operate close to its coast. The article falls short of providing any substantial evidence for its claims. Only postulation it provides is the absence of Pakistani naval vessels in the international Fleet Review of the Chinese Navy in Qingdao, lauding Indian navy for same. This assertion appears to be based on blowing single event out of proportion, without taking it into context.

The re-transmission of the article on social media after a year seems like a desperate attempt to dampen the embarrassment Indian Navy faced in the post Pulwama situation. The inability of the Indian Navy to operate more than one submarine out of 15; which was also detected, deterred and humiliated; is still fresh in many minds. Indian Navy also displayed its incapability in recovering its ship stranded in a foreign port due to fear of Pakistan Navy reprisals during the stand-off.

The Indian Armed Forces faced all of this embarassment despite being the 3rd largest defence spender in the world as recently quoted by Stockholm International Peace Research Institute (SIPRI). India’s lavish military spending seems devoid of any vision as aptly described by Stephen P Cohen and Sunil Dasguptain in their co-authored book Arming without Aiming.

The article, besides attempting to recover Indian Navy esteem from its Post-Pulwama dismal image, is also trying to target Pakistan-China relations by repeatedly highlighting Pakistan Navy’s absence from the PLA(Navy) annual review. Not realizing that Pakistan and Chinese navies mutual friendly relations are not dependent upon fleet reviews as was evident from bilateral Sea Guardian exercise conducted between two Navies in the North Arabian Sea, amidst Pakistan-India stand-off.

The assertion in the article that the Pakistan Navy is forced to operate along the coast is also far from reality. Pakistan Navy continues to accomplish its responsibility of ensuring freedom of navigation through regular Regional Maritime Security Patrols, while also supporting multinational Task Forces 150 and 151 in the North Arabian Sea. Pakistan Navy ships during overseas deployment have navigated around the whole of Africa and also set up medical camps, which were widely hailed in diplomatic circles.

The Covid 19 Pandemic, despite grounding many navies around the world, has not been able to prevent Pakistan Navy from carrying out its military duties. In February, Pakistan Navy displayed its war preparedness by conducting major exercise Seaspark. Similarly on April 25, Pakistan Navy Fleet demonstrated their combat readiness through live weapon firing of anti-ship missiles in the North Arabian Sea. Ironically Indian media criticized those tests amid rising concerns about COVID-19 and as usual ignored Pakistan Navy’s efforts of humanitarian aid to several coastal communities.

It is strongly felt that retransmission of this article is only a compliance of Hitler’s directive on repeating a ‘big enough lie’. This directive is not the only Nazi principle followed by the Hindutva BJP, which is currently engaged in a horrifying campaign of persecution of its minorities, especially Muslims. It could be the Nazi ideals of militaristic expansionism, much admired by the current Indian regime, that has compelled India to take up the extravagant mindless modernization campaign of its military while India’s poverty line increases. Visionless expansion of military continues, while hapless masses are crushed daily under the combined weight of both adverse economic conditions and religious fascism.

Jawad Falak is an MPhil student at National Defence University, Islamabad and is a resident research associate at Maritime Study Forum