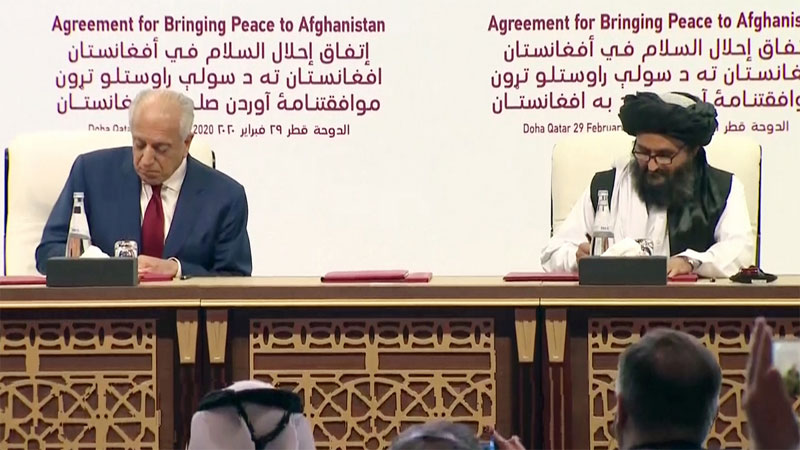 While it remains to be whether the peace deal between the Afghan Taliban and the United States can to bring peace to Afghanistan or not, the fact remains that withdrawal of the US is a nightmare for Afghan government and security forces because almost 75% of the resources to it are provided by the US and allies. On the other hand, the Taliban in Afghanistan are a self-sustained force in the sense that their cost is very little but they have set up an effective system of revenue generation to meet their expenditures. The absent of the US makes Afghan government vulnerable and weak against the Taliban.

After spending almost two decades on the Afghan soil, America has finally decided to pack up as it realized that a military solution is not viable, thus opting for negotiations, which were assisted by Pakistan and resulted in a peace deal at Doha on 29 February. The US agreed to withdraw troops from Afghanistan in a period of 14 months, while the Taliban said they would not attack the US and its allies as a result of the peace agreement. Thus, the Taliban, previously labeled as terrorists by the US, are now a legitimate political entity and stakeholder in Afghan affairs.

The deal has also alarmed India because it has invested in Afghanistan for the last 18 years, and it now appears that New Delhi remains a bystander to a rapidly changing political situation. Also, there were anti-India protests organized recently in provinces like Kabul, Herat, Kapisa and others. Therefore, both the NDS, Afghan intelligence agency, and RAW, the Indian agency, are making all-out efforts to derail the peace process. It is said that Indian hand was also behind the resistance shown by President Ghani administration when the US agreed on the prisoners’ release in the Doha deal.

Recently, a few incidents were claimed by Daesh Khurasan Chapter a.k.a ISKP in Afghanistan, including attack on ceremony marking death anniversary of Hazara leader Abdul Ali Mazari on 6 March and Kabul Gurdwara attack on 25 March, 2020 by an Indian, Khalid al-Hindi from Kerala state of India, as already reported in the media. The IS first appeared in Afghanistan in 2014. It was composed almost entirely of Afghans who pledged allegiance to Abu Bakr al Baghdadi, however, that group has already been decimated by the US and Taliban. However, the group currently operating in Afghanistan under the banner of the IS comprises militants who parted from TTP after they were denied space in Pakistan by Pakistan Army which launched operations and those TTP militants escaped into Afghanistan. The TTP, after going to Afghanistan, became a weapon for RAW which used them. Involvement of ISKP in a number of terrorist attacks in Pakistan while bringing no harm to India further confirms their affiliation with RAW.

According to the sources based in Afghanistan, the Taliban inflicted heavy losses on the ISKP, but the US remained selective in their operations against this group and tried to limit the activities of this group in the border areas near Pakistan, such as Kunar and Nangarhar provinces. They say that NDS have used this group to weaken the Taliban and whenever Taliban launched operation against ISKP for elimination, Afghan forces targeted Taliban positions through ground and air operations, thus giving a breathing space to ISKP. The Afghanistan-based sources also claim that on a number of occasions, the IS fighters, when besieged by the Taliban, were lifted by Afghan Air Force in MI-17 helicopters to save them.

On 4 April, the NDS announced arrest of a key ISKP leader Aslam Farooqi, along with 19 associates. Farooqi was a former TTP leader. However, sources based in Afghanistan say that he had already surrendered to NDS due to the fear of Taliban in early March, weeks before Kabul Gurdwara Attack.

Now the claiming of attacks by ISKP while their organization has neutralized and key leadership in the custody of NDS is a question mark. There is a possibility that the above mentioned incidents might be being staged by RAW and NDS to derail peace process as the US-Taliban deal is not in favour of both the Afghan and Indian stakeholders, and they may be now using Aslam Farooqi and his associates, under the custody of NDS, to claim responsibility for the attacks.

An anatomy of the situation leads one to a conclusion that the NDS and RAW are likely to use Aslam Farooqi to defame Pakistan and its intelligence agencies. The recent attacks on Kabul Gurdwara and Hazara leader Abdul Ali Mazari Anniversary ceremony points to efforts to spoil the goodwill that Pakistan has earned from the Sikh Community by Kurtarpur Corridor project and also to create ill will among Ahle-Tashee community against Pakistan. The US-Taliban peace deal has brought some hope for peace in the war-ravaged Afghanistan. However, the peace process is likely to face obstacles because the RAW and NDS may not like the US withdrawal as then it will not be easy for India to revert its long nourished proxy war against Pakistan from the Afghan soil.

The writer is a journalist and can be reached at: shahid152001@yahoo.com