Why is India scapegoating Pakistan, Muslims for COVID-19 crisis?

A week ago, several Indian news channels reported that they had discovered a big conspiracy which involved Pakistan using COVID-19 as a biological weapon against India. Several channels, including Times Now, claimed that Pakistan plans to “infect the country by sending COVID-19 infected individuals to India from Nepal.”

The triviality of rash reports didn’t stop there. There were claims of India’s government taking the threat seriously and collaborating with the government of Nepal to neutralize COVD-19 launch pads. All of this will come across as comic unless one looks at the BJP lead government’s plans to fight the pandemic.

The state’s fixation with Pakistan has grown to a level that there is no other debate which could hold the country together. While one can understand that India’s mainstream media has to keep the Modi regime happy, it is alarming that India’s army chief during his recent visit to Jammu and Kashmir remarked that Pakistan was exporting terror at a time when India is helping its citizens and the world to contain the pandemic.

“Muslims have now seen their businesses across India boycotted, volunteers distributing rations called ‘coronavirus terrorists’, and others accused of spitting in food and infecting water supplies with the virus. Posters have appeared barring Muslims from entering certain neighborhoods in states as far apart as Delhi, Karnataka, Telangana and Madhya Pradesh”

While India blames Pakistan for undermining its COVID-19 efforts, let’s consider some facts.

There is not a single country across the world where COVID-19 patients are going through religious profiling. According to a report published by Al-Jazeera on April 16, governments across India are segregating patients on religious lines, triggering allegations of apartheid. The report further notes that hospital administration say that orders in this regard came from the government, led by the BJP. On April 15, the USCIRF, a bipartisan federal government entity in the United States which monitors, analysis and reports on threats to religious freedom noted that we are “concerned about reports of Hindu and Muslim COVID-19 patients being separated. Such actions only help to further increase ongoing stigmatization of Muslims in India and exacerbate false rumors of Muslims spreading COVID-19, noted the agency.” 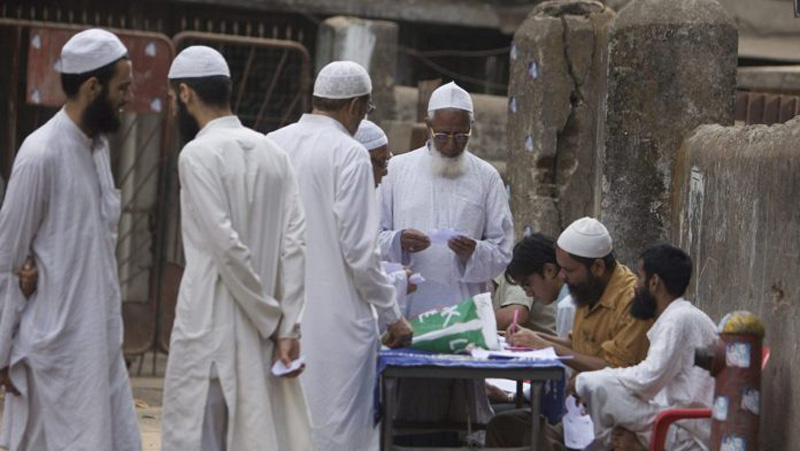 “It was already dangerous to be a Muslim in India. Then came the coronavirus,” noted one of the Time Magazine’s covers.

The Guardian reports, “Muslims have now seen their businesses across India boycotted, volunteers distributing rations called ‘coronavirus terrorists’, and others accused of spitting in food and infecting water supplies with the virus. Posters have appeared barring Muslims from entering certain neighborhoods in states as far apart as Delhi, Karnataka, Telangana and Madhya Pradesh”.

The profiling in this regard is being accelerated on social media platforms across India. One of the most retweeted posts targeting Muslims from India, claim to show a Muslim man intentionally coughing on other people. The tweet denoted Indian Muslims as “such vile minded people” and listed hashtags including #CoronaJihad. The video which was tweeted more than 4,000 times and shared across hundreds of WhatsApp platforms was not even from India.

However, it’s not just the BJP’s government or Hindu nationalist mobs that are making the problem worse. The country’s media has joined in too. Last week, one of India’s top newspapers, The Hindu, published a caricature displaying the world being held captive by the COVID-19 — with the virus itself portrayed wearing an attire associated with Muslims.

Instead of obsessing with Muslims and Pakistan to deal with COVID-19, India should focus on revamping its healthcare system that is not ready to cope a population of more than one billion people. The growing community transmission, low levels of testing and poor access to healthcare means many people are not reporting and true figure is much higher than reported.

Instead of resorting to politicking over the issue, India needs to invest in its health care system which is not ready to handle the world’s second largest population. India should not resort to anti-Pakistan and anti-Muslim rhetoric as that won’t turn away the looming crisis. Economic frustration is already developing in the country and with the economy (World Bank figures) expected to grow between 1.5 to 2.8 percent, India’s ruling elite is set to collide with its populace.

As economic pain grows and weak healthcare system comes under pressure in India, Pakistan should watch out for New Delhi’s blame game.

The writer is a freelance journalist and a correspondent for The Diplomat, based in Lahore, Pakistan