Is mismanagement a result of mere incompetence or stupidity? The answer is a simple yes. Crisis politics in the world is going to be prevalent and it is quite dark. The political ideology that does not have the capacity to control a disaster in a proactive way has no right to continue. There are two main categories of disasters in the world: first, an economic crunch, a natural calamity, a military conflict or a war, and the second category is the use of a biological weapon to kill the masses. This killing might be for reduction of population or climatic change or for power shifting or to create chaos to bring in a new world order. This time the virus “corona” is devastating the world. It is changing the dynamics of the world and is also changing the socio-economic and political system of the world.

There are different conspiracy theories interpreting the contemporary scenario of the world after the invasion of corona. As a student of history and political science, I simply determine that this global crisis is the worst after the Second World War. The world is almost shifted into a global emergency mode. Different political scientists have already stated that powers that be tried, many times, to put people into an emergency mode. It is exemplified by terrorism. This virus has the power to make things go from bad to worst and it is already happening. It has become the cause of many deaths, distress and suffering throughout the world. 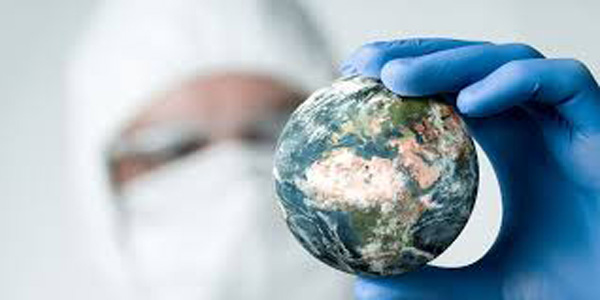 Let me discuss the conspiracy theories behind this menace. The first one has been floated by Americans that this virus is inherently from China and it is a man-made biological weapon that is made to shift the power dynamics of the world. Another conspiracy theory is that the virus is made in the laboratories of the US and was spread in China by US soldiers. The purpose of this virus was to just destabilise the most strongly emerging economy of the world. No one knows yet which hypothesis is accepted, and which one is rejected.

In the time of war, it is mandatory that people know about the enemy as much as they can. But this enemy is not visible, and therefore, it is quite dangerous for all human beings.

It is being said that through this virus the political status quo of the world is going to be broken. Catastrophic threats including pandemics are here, and the world isn’t prepared to face them

How the fundamental conflictive nature of politics is going to be changed is yet to be seen. History shows that previous plagues such as the influenza epidemic of 1918-1919 did not end the great power contention and did not even usher in a new age of inclusive and global collaboration. But the coronavirus will make a paradigm shift and hyper-globalisation would go into a retreat mode. The world must remember that this deadly virus, weak planning and incompetent leadership will put humanity on a troublesome path.

It is quite clear that the coronavirus pandemic would be the straw that breaks the camel’s back of financial and economic globalisation. The coronavirus has the power to force states and their governments, companies and societies to fortify their abilities and capacities to handle an extended period of economic self-isolation. An important question is raised that the world would be returned to the idea of mutually beneficial globalisation that was defined in the early 21st century. It would become the source of inspiration for world political leaders and think tanks to sustain international cooperation.

The current coronavirus pandemic crisis might not have the power to fundamentally alter the direction of the world economy, but it will definitely accelerate a change that is already there: to move away from US-centric globalisation to China-centric globalisation. It would be a great setback for the US and its alliances.

The coronavirus crisis will give fuel to the world to move toward a new world order. The nationalists, the China hawks, the liberalists, and the anti-globalists would be able to analyse new evidence for their point of views about a changed world scenario. There would be huge economic damages and social collapse, leading the world towards nationalism, strategic decoupling, patriotism, great power rivalry, and migration.

It is important to note that this virus will reinforce nationalism and strengthen countries. Governments will come to know how they should behave in a crisis. The coronavirus crisis will obviously accelerate the shift of power dynamics. This shift can range from west to east. China, South Korea and Singapore have excellently reacted after their early mistakes, but in Europe and the US, the response is slow and haphazard by comparison.

Three important shifts are expected after the end of the pandemic. First, it will change the world politics within the states and among the states. Authoritarian and populist countries would be able to handle this pandemic well. The post-coronavirus era will promote real democracy. Second, this is not yet the end of globalisation or an interconnected world. But after this pandemic, states will work for their autonomy and concentrate on the control of their own fate. There is a probability that the world would be poorer, smaller and meaner. Third, there a few signs of good sense and hope as well. The powers that be will reconsider the idea of promoting exploitation, deterioration and terrorism. Priorities will be changed.

This coronavirus pandemic will not have only long-lasting effects it will also lead to fundamental socio-economic and political changes.

The writer is a Ph.D. scholar in media and crime, a CSS coach, and author of books on international relations, criminology and gender studies. He can be reached at fastian.mentor@gmail.com