Bajwa-Imran visit to China and rumours about CPEC

It has been a rumour for a long period that China-Pakistan Economic Corridor (CPEC) would be stopped because of various reasons, including the negligence of the present government. In this regard, there are two popular narratives about the CPEC and Pakistan-China relations. One perspective which has been doing the rounds in the Pakistani society for a long is that because of American and Indian pressure regarding CPEC and Chinese involvement within the country, Islamabad has stopped the work on the projects that come under the CPEC. Besides, Pakistan has been pressurized through International Monetary Fund (IMF) and Financial Action Task Force to withdraw from Chinese investment in the country, therefore, it faces various difficulties in continuation of projects. While another perspective portrays an optimistic picture of the whole scenario where work on CPEC projects is in process and 13 projects worth $11 billion have completed. The projects such as M-5 (Multan to Sukkur Motorway), 2×660MW Port Qasim Coal-Fired Power Plant, 50MW Dawood Wind Farm, and 100MW Jhimpir Wind Farm have been completed which show the progress and success of CPEC. Also, the visit of Prime Minister Imran Khan and Army Chief Qamar Javed Bajwa and their talks about CPEC as well as point of view regarding CPEC show that both the army and government are on the same page to continue the projects under CPEC. 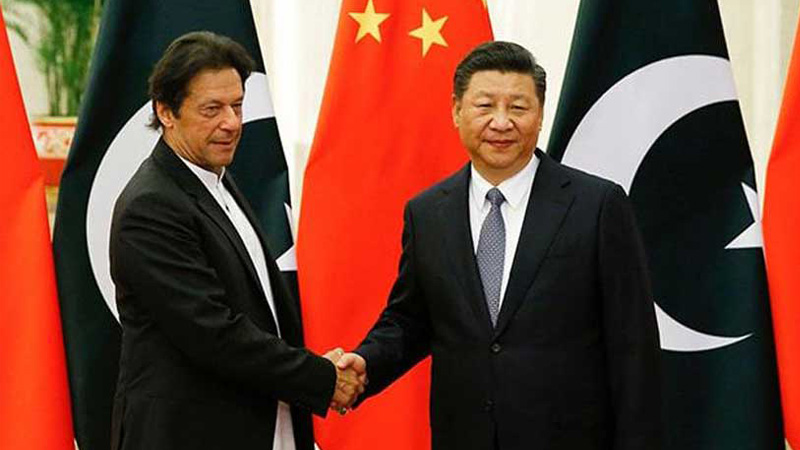 Moreover, the formation of the CPEC Authority which keeps the surveillance upon CPEC related works is also the evidence of the seriousness of government regarding the projects. Furthermore, both representatives have shown the intention of making relations between China and Pakistan even stronger through engagement in multiple businesses and trade-related activities. Though American pressure creates many difficulties for Pakistan to continue the project still there is much progress in many projects related to CPEC. Moreover, America does not want China to rise at regional as well as global level. In this regard, the United States has tried to counter Beijing actively on various grounds. Likewise, the American “Pivot to Asia” or “Rebalancing” policy aims to counter and restrict Chinese influence in the Asian continent including countering its engagement in the Asia-Pacific. Despite Washington’s efforts to contain Beijing, China’s economic growth shows its success. Therefore, it is considered the right time for Pakistan to shift its tilt towards China rather than an unbelievable, unpredictable, and weak alliance with America. Furthermore, Islamabad has been testing and observing the friendship of America which mostly remained seasonal and based on a specific issue after the fulfillment of objectives, Washington uses to ignore Islamabad even in its difficult times.

Pakistan through proper utilization of the CPEC initiative can boost its economy and get rid of American bloc which has a great share in the destruction, deaths, terrorism, underdevelopment and backwardness within the country. Many of the writers dub the CPEC and Chinese involvement in Pakistan as game changer which would take Islamabad towards the path of peace, prosperity, development, progress, and innovation within multiple fields. It is said that Pakistan could serve as the “Israel of China” because of various reasons it may be economic, political or financial which can be useful for the development of Beijing as well as Islamabad. Israel keeps much importance for the US and it cannot compromise on its interests even at the cost of opposition and criticism from many states. In the same manner, the South Asian region, particularly Pakistan, carries great importance for China which could connect Beijing with various natural rich resource nations of the Middle East and Central Asia. Moreover, it connects Beijing with many other important countries of various continents of the world. Therefore, China has been struggling to create peace in the region. Furthermore, Afghanistan is the major nation which suffers from instability and security problems that also left effects on regional stability. Therefore, China wants to solve the Afghanistan problem for making it stable which will pave the way for the completion of the Chinese Belt and Road Initiative (BRI).

Concerning the Afghan issue, Beijing sees Islamabad as an important state which can play a decisive role in solving the Afghan problem as well as bringing peace in the region. Peace and stability in Afghanistan could serve multiple interests of China because Kabul provides the land route for China to reach the Central Asian states that ultimately connects it with Europe. Therefore, China has been struggling hard to secure its national interest. That can easily be achieved if China will be successful in generating the dominance and influence over the South Asia region. Furthermore, this region is considered the testing grounds for the success of the Chinese initiated project namely BRI. As for American bloc and the other entities which are not happy with the rise of China are concerned, they also know the importance of this region for Beijing. It is mostly agreed that the success of BRI depends upon the successful completion of projects within this region. Therefore it is observed that if Beijing would be successful in the completion of projects all over South Asia, no one can beat and resist China becoming the dominant or global power. In this regard, Washington will not allow Beijing to take its place easily. So it uses multiple strategies to contain China such as pressurizing Pakistan to withdraw from BRI, Strengthening relations with India and prolonging Afghan issue, and putting new sanctions on Iran.

The writer is Ph.D. scholar in the Department of Defense and Strategic Studies, Quaid-i-Azam University Islamabad, Pakistan