“W hether he is hang or he lives the consequences will be far reaching. He has ruled the politics of Pakistan as President and prisoner. He or his ghost will continue to rule them” wrote Pran Chopra, a noted analyst and commentator in the last book of ZA Bhutto “If I am Assassinated” which was smuggled out from the death cell of the former president, prime minister, who was subjected to “judicial murder” on this day April 04, 1979. The man who gave unanimously agreed constitution to the country was kept in a “stinking death cell”. ZAB is still ruling over the hearts and soul of millions of poor of the country 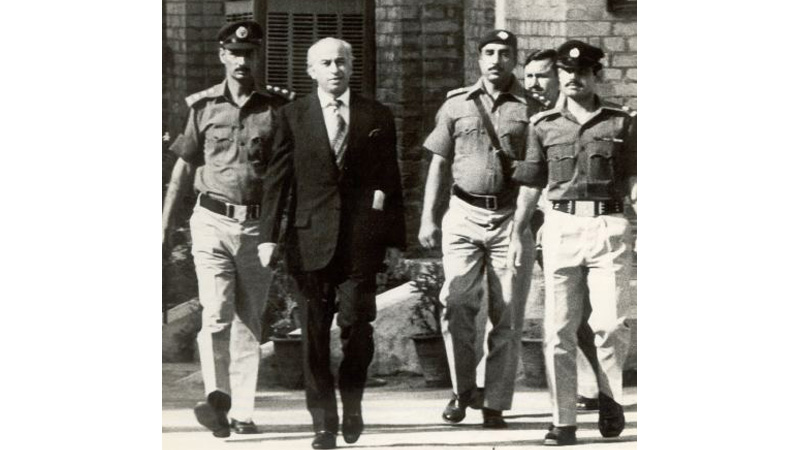 Rawalpindi central jail, 0200 hours, April 4, 1979, the judicial murder (as it was termed latter on) of first elected prime minister of Pakistan, chairman of Islamic Conference and architect of the atomic program of Pakistan Mr Zulfikar Ali Bhutto took place. Tara Masih was the hangman. The trial and execution of Bhutto was and even today is the most controversial subject in the history of Pakistan in particular and in the judicial history of world in general.

ZA Bhutto rose to the power corridors from the deserts of Sindh, and after resigning from the cabinet of Ayyub Khan as foreign minister, formed his own political party with the name of Pakistan People’s Party, due to his charismatic personality won the heart of millions of his country man and got majority votes in the 1970 general elections in the Western Wing of the country. After the unfortunate fall of the Eastern Wing, he became the president and Chief Martial Law Administrator on December 20, 1971, with the aim to “Pick up the pieces, very small pieces”. He was the most popular leader, but his government was toppled on July 5, 1977, by the than army chief General Ziaul Haq, and finally on September 3, 1977, ZAB was arrested on the charges of ordering to murder Nawab Muhammad Khan, father of his political opponent Ahmed Raza Kasuri on November, 11, 1974, by the Federal Security force.

The trial started in the Lahore High Court on October 11, 1977 before the full bench of five judges with chief justice Maulvi Mushtaq Hussain, Justice Zaka Uddin Pal, Justice M.S.H Qureshi ,Justice Aftab Hussain and Justice Gulbaj Khan, thus that was the start of one of the most controversial trials in the judicial history of the world.

The verdict of the Lahore High Court was announced on March 18, 1978, with all accused being found guilty and sentenced to death with the remarks in the judgment that Bhutto was a “compulsive liar” which were to be deleted by the Supreme Court order.

The former attorney general of the united States Ramsay Clark is of the opinion that “The chief justice’s prejudice against Bhutto spread throughout 145 pages decision” and in the words of ZA Bhutto himself quote “A Muslim can only prostrate himself before his Creator. But the bench, particularly the chief justice, was always rude, abrasive, and insulting to me .In contrast, the Chief Justice was kindness itself to the confessing co-accused. He smiled at them. He enjoyed their rustic sense of humor at any expense. The taunts the frowns and the shouts were reserved only for me. I was favored with comments to “shut up,” “get up, and “take this man until he regains his senses”.

“In these circumstances to talk of co-operation is to ask for the patience of a saint.”

An appeal was filed in the Supreme Court of Pakistan against the judgment of Lahore High Court on March 25, 1978, to be heard before a full bench of nine judges, which included Chief Justice Anwar Ul Haque, who had publicly referred to General Zia as “a national Savior” {The point Bhutto raised during the trial} Justice Qaiser Khan, Justice Wahiduddin Ahmed, Justice Muhammad Akram, Justice Karam Elahee Chauhan, Justice Nasim Hassan Shah, Justice Durab Patel, Justice G. Safdar Shah and Justice Muhammad Haleem. By the time the appeal trial had started , Justice Qaiser Khan had retired and Justice Wahiduddin Ahmed fell sick. In the words of Stanley Wolpert in “Zulfi Bhutto Of Pakistan” “Yahya Bakhtiar had initially hoped for a 5-4 decision in favor of reversal of high court verdict, counting not only on the three justices who finally voted for Bhutto’s acquittal, but also on justice Wahiddudin Ahmed and Justice Qaiser Khan, with the latter two gone”.

The judgment was delivered on February 6, 1979, with four judges, including the chief justice, upholding the Lahore High Court decision and three judges against.

That was the end of an undisputed leader of the third world, a man who gave this nation and the people the gift of a unanimously adopted and agreed by all the federating units a constitution, who brought all the Muslim countries at one platform and who wanted to “Make a new Pakistan, a prosperous and Progressive Pakistan, a Pakistan free of exploitation, a Pakistan envisaged by the Quaid-i-Azam”.

ZAB is loved and adored by his countrymen whom he gave voice, a voice to stand up for their rights, for justice and equality. His contribution to introducing the spirit of democracy in the country has even been recognized by his worst enemies. He was a man of extraordinary vision and sense of international politics. The first elected prime minister in the world history hanged to death by the dictators and the enemies of the masses having vested interests was Adnan Menderes of Turkey in 1961, who preferred the gallows than to bow before the tyrants. The world community requested the Turkish government in the strongest possible words for mercy. The than president of Pakistan Ayub Khan especially sent his foreign minister Z A Bhutto to Turkey , ZAB met Jamal Gurcel to plead the case of Adnan Menderes, but Gurcel was of the view that hanging of Adnan would solve Turkey’s problems. ZAB made it clear to the Turkish strongman that hanging would be the start of unlimited problems for Turkey. History has proved that how far sighted ZAB was, but exactly after 18 years, ZA Bhutto was hanged. The dictator Zia didn’t learn a lesson from the history, as for him his own life and power were far more important than the future of Pakistan. ZAB was not acceptable to the world powers and they wanted to “make a horrible example” of him, simple forgetting that their “horrible example” would turn into a Bhutto legacy, and will live in the hearts of millions for ever. (A warning to ZAB by the than secretary of state US Henry Kissinger, on ZAB’s desire for acquiring atomic technology, which till to date Kissinger has neither denied nor confirmed. Mr Tariq Ali in his book “The Duel” has narrated the complete episode quoting a senior Pakistani foreign office official. Mr Henry Kissinger while warning ZAB had no idea that their “horrible example” would turn into a Bhutto legacy, and will live in the hearts of millions for ever.

ZAB is loved and adored by his countrymen whom he gave voice, a voice to stand up for their rights, for justice and equality

The world leaders of the time would seek his advice on global matters. Oriana Fallaci in her book “Interview with History” recounts him in the words of Dr. Henry Kissinger, as “very intelligent, very brilliant”, agreeing with Ms. Fallaci on the list of world leaders who had impressed her “Primarily on Bhutto”.

During his very short life he made wonders , to list few, permanent constitution, return of ninety thousands prisoners of war, return of vast area occupied by India during the 1971 war, Islamic Conference, starting the atomic program with the promise “to make an atomic bomb even if we have to eat grass”, to introduce Pakistan to the world community as an Independent and proud nation, arranged lucrative jobs for the working class of the country and above all gave voice to the neglected and the poor masses of the country. His body was flown to Ghari Khuda Buksh to be buried in his ancestors graveyard under the cover of darkness, with his wife and Daughter of the East under house arrest and his sons living in a forced exile, and the followers in millions were barred to attend the funeral, the poor of the country, for whom he had gone smilingly to the gallows. As Faiz Ahmed Faiz, has said

(With dignity one goes to the gallows, that grace remains forever, this life is immortal, and who cares for this life).

He was a man or iron nerves, very gracefully went to the gallows thus conveying a message in clear and loud words not to bow head before dictators, tyrants and oppressors.

Benazir Bhutto, the eldest daughter of ZAB in her book ‘Daughter of the East’ narrates a meeting with her father when he was facing the so called trial of conspiracy to murder.

“You don’t understand, do you Pinkie?” he said gently. “They are going to kill me. It doesn’t matter what evidence you or any one comes up with. They are going to murder me for a murder I didn’t commit… My life is in God’s hands, not any ones else. I am prepared to meet God whenever He calls me. My conscience is clear. What is important for me is my name, my honor and my place in history. And I am going to fight for it.” ZAB proved to his words. He accepted death smilingly to safe guard his honor and dignity and to leave an everlasting name and a bright place in history.