Lockdown: violators should be punished

It’s been many days since I last went out of my house. The good men who manage the affairs of our apartment complex have decreed that senior citizens stay home until the virus has been tamed. But most residents violate the order to refrain from praying in the mosque. “It’s unthinkable”, says a Muslim resident, “It is mandatory to gather in a mosque five times a day, corona or no corona”. The cops who are supposed to enforce the law apparently agree, they participate in the congregational prayers as well (despite the presence of Tableeghi Jamaat members who may have been infected while attending the recent gathering in Raiwind). I see from social media that throughout the country, men are doing the same without considering that they are endangering the lives of those who are most vulnerable (like me). It’s for these reasons that I fear we may lose the battle against the dreaded virus.

As those who are against the lockdown say, “All of us have to die one day, so why not now?”

Now the greatest authority on Sunni Islam (Shaikh Al Azhar) has advocated that mosques be closed to prevent the spread of the disease. Even Saudi Arabia, the UAE and other countries have done so. But our ulema apparently consider themselves superior to those in other countries, they want the faithful to gather and offer congregational prayers five times a day. Last Friday the mullah in a Clifton mosque near my work place exhorted his audience to come regularly to his mosque despite government orders not to do so. Today I heard that people stormed the door of a mosque in Karachi’s DHA to offer prayers, putting others at risk.

I remember how, when Al Azhar decreed that simple bank interest was not equivalent to “riba” and was therefore permissible, a prominent religious party leader said he did not accept this ruling, as Al Azhar had permitted the use of condoms for birth control. I suppose the same reasons will be cited for rejecting the august body’s fatwa regarding closure of mosques. 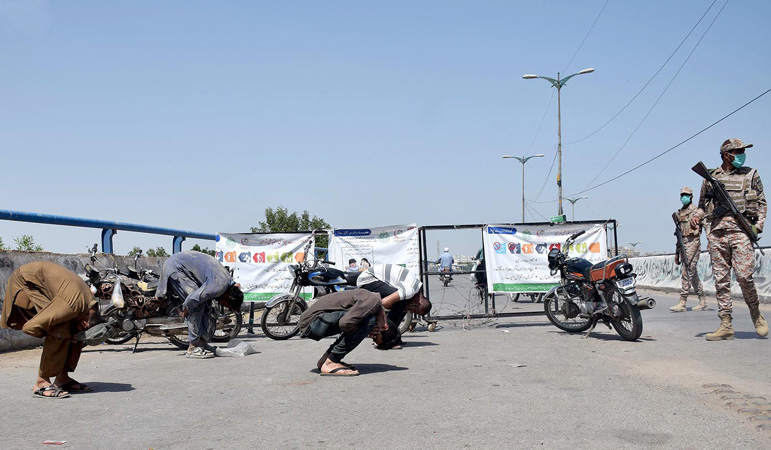 I was wondering: what if all nations simply resigned themselves and gave up? What if we just sit back and decide to let nature take its course, and let those who are vulnerable die? As those who are against the lockdown say, “All of us have to die one day, so why not now?” A hundred years ago, during the last pandemic, 50 million perished. How do you explain to them that even though death is inevitable, the virus will cause millions to die an early death? Here we run into another problem. “The time of death for every living thing is fixed, you can’t delay it with medications and lockdowns”, say the faithful. Even when you tell them that those who survive the virus will be forever scarred, with reduced immunity and lung damage, they are not convinced. They point out that a 103-year-old woman survived, but they ignore the fact that an infant also succumbed. It’s useless, these people will never comply, the government will have to use force to make them do so. But our prime minister Imran Khan himself is not sure what to do. He’s against a complete lockdown; he wants buses and trucks to continue operating. Sure, it will ensure that truck and bus drivers will remain fully employed, and it will enable people to travel between cities to visit their relatives and pray at their favorite shrines, but again, it will result in more and more people being infected. So the end result will be the same: a lockdown or even a curfew.

The Great Khan should learn from what other countries have done. In parts of the U.S., there is a complete curfew, in neighboring India, a lockdown has been enforced for three weeks. Apparently this is the only solution. Those who violate the lockdown should be punished. There is no other way.