* SAPM says passenger traffic and trade will remain suspended at borders with Afghanistan, Iran and India
* NDMA says 45 tons of medical supplies to reach Pakistan from China on Tuesday 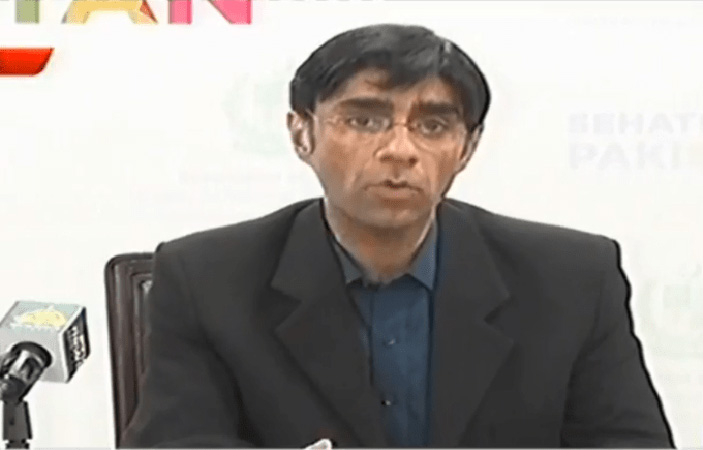 Addressing a press conference along with National Disaster Management Authority (NDMA) Chairman Lieutenant General Muhammad Afzal and SAPM on Health Dr Zafar Mirza, he said the National Security Committee on March 14 had earlier decided to halt border traffic on borders for two weeks. “The closure duration of two weeks of the borders has come to an end and therefore NCC has decided to extend the restriction for another two weeks. Both passenger traffic and trade has been stopped at the borders with Afghanistan, Iran and India, which includes Kartarpur Corridor as well,” he added.

The SAPM informed the media that all the ports are functional where screening is continued with beefed up arrangements. He said the international flights are banned till April 4 and there no flights can leave the country from Sunday (today). He said the Pakistani passengers stranded at different international airports have been brought back to Pakistan, while the remaining have received visas from the respective countries to further their stay. “Our last station in Thailand has also been cleared where Pakistani passengers had been stuck for the last many days. The issue has been resolved and a Thai airline is bringing back those passengers,” he added.

The SAPM said the purpose of suspending the air space is to avoid major outbreak of coronavirus in the country. He said the suspension will be lifted gradually. He said in case any country wants to arrange special flights for its citizens stranded in Pakistan, they will be facilitated on case-to-case basis. He said the domestic flights are also suspended except the ones form Gilgit and Skardu.

NDMA Chairman Lieutenant General Muhammad Afzal said the authority is going to recruit 100 lab technicians having expertise in molecular biology in BPS-14 to overcome shortage of skilled workforce in testing laboratories. He said in order to overcome this shortage, the NDMA using its powers under an article of NDMA Act and will float an advertisement in this regard. “We will offer four to six months contract to these lab technicians and if this experiment goes successful, it will help overcome gaps in testing of the patients,” he added.

He said the NIH and NDMA are collectively working out to boost number of labs existing in Pakistan. “In Islamabad Capital Territory (ICT), we will final our plan to set up the facility as there are machines and relevant equipment available to fulfill the task,” he said, adding that NDMA is going to provide testing kits and machines to three healthcare institutions in Karachi, including SIUT, JPNC and Indus Hospital to set up testing labs. As Indus Hospital will primarily operate its testing facility in JPNC, two laboratories will be established at the JPNC, he added.

While elaborating on the status of existing labs, he said there is one lab working in Muzzafarabad, Azad Jammu and Kashmir (AJK); one out of order machine has been fixed and sent back to Mirpur, whereas two more testing machines are being handed over to the AJK. He added that one testing lab will be established in Rawalakot and one more testing machine will be provided to Muzzafarbad.

The NDMA chairman said one more testing lab is to be set up in Khyber Pakhtunkhwa (KP) somewhere between Abbottabad and Mansehra. It will be established in collaboration with the KP government, he added.

In Dera Ismail Khan, evaluation for setting up lab is underway so that a coordinated network of testing labs in Peshawar, Abbottabad, Mansehra, DI Khan, Karak or Banu canb be established in KP, he mentioned. In Punjab, he said establishment of testing lab at Rawalpindi Medical University (RMU) is in process and will be made functional in the coming two to three days. Meanwhile, he said the NDMA is carrying out a feasibility study to establish testing labs in Gujranwala and Gujrat and areas having no lab facility within next 15-20 days.

The number of testing labs will be beefed up from existing 14 to 24 after installation of new equipment received from China. “We will persistently increase the number of labs from 35 to 40 and ultimately 50 in the next 15-20 days,” he added.

He said the NDMA has booked around 679 ventilators from Chinese companies, out of which 400 will reach Pakistan within three to four months. Moreover, around 150 ventilators will be received in the next week and have been sent as donation from different countries, he added. He said almost 45 tonnes of consignment will reach Pakistan on Tuesday as a special aircraft will take off for China on Monday night. He said the cargo will contain ventilators and walk-through gates which will be installed at airports.