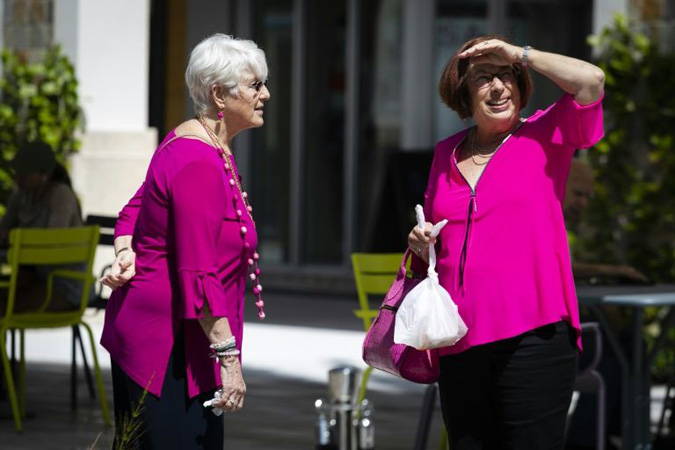 Florida, often called “the grayest state” in the US because so many elderly retire here, is facing up to the fact that it has an alarming concentration of the demographic most at-risk from coronavirus.

“Everything is an uncertainty because we don’t know how this is going to end, you know?” said Anita Lammersdorf.

“How bad is it going to be?” asked the 80-year-old Lithuanian-American who still works as a real estate agent.

Lammersdorf spoke to AFP on the doorstep of her home surrounded by the orchids and poinsettias which thrive in Florida’s subtropical climate.

In keeping with medical guidance, she kept a 10-foot (four meter) distance between her and the visiting members of the press.

Aside from a pacemaker, Lammersdorf has no other underlying health conditions that put her at extra risk should she get infected.

“I hope I am strong enough to meet the guy if it comes,” she said, referring to the virus sweeping the country.

Lammersdorf lives in Delray Beach, in northern Miami, having spent a large part of her life in the nation’s capital Washington and in Venezuela.

Like many other pensioners across the nation and even from other countries, she chose to retire to this balmy southeastern state.

Others live here four or five months of the year to escape the colder northern winters, an annual migration that -– together with their white hair -– earns them the nickname “snowbirds.”

Florida usually has the largest proportion of elderly people in the United States: 20.5 percent of its population is over the age of 65, according to a 2019 study by the Population Reference Bureau.

Last year, that trend was beaten slightly by Maine, with 20.6 percent of its 1.3 million people over 65. But Florida has more than 21 million people, and 1.1 million are over the age of 80.

“This particular virus is particularly deadly to older adults, and Florida’s demographics are somewhat unique within the country,” said Jeff Johnson, the Florida director for AARP, a non-profit organization for people over 50.

Some Florida seniors live in retirement homes, but most are independent and live in communities designed especially for older people.

These are often built around golf courses or tennis courts and feature social clubs where members play bridge, attend book clubs or do handicrafts.

Senior living communities impose age limits on residents -– no one under the age of 55 can move in –- and their streets often have special lanes designed not for bicycles but for golf carts, the favored mode of transport in Florida.

Now they house the community most vulnerable to the coronavirus that has caused international borders to be shut and led to millions of people being confined to their homes.

The risk of dying from the virus is low, except for people with underlying health problems and those over the age of 60.

A report by the World Health Organization carried out with the Chinese authorities found that for people over 80 years old, there was a fatality rate of 21.9 percent.

“There’s Floridians all across the state who are in those target categories,” Johnson told AFP.

“And we have large pockets of people who either have retired here from other parts of the country or who have been here their whole lives.”

“While there are tens of thousands of people in nursing homes, there are millions of older Floridians who are living relatively happily in their communities,” he said. “And obviously we need to pay attention to them, too.”

For now, that may mean not taking part in social activities, avoiding visits and keeping in touch by telephone.

In a community for the over-55s in Pompano Beach, in the north of Miami, two Canadians from Quebec — both of them “snowbirds” in their seventies — try to stay optimistic given the circumstances.

“We know this is going to last a while,” said Denise Bedard, of herself and fellow Quebecker Dian Lemay. “But we are in good health, and we’ll wash our hands like we know we should.”

As of Monday, Florida had 139 confirmed cases of COVID-19, a number that could increase exponentially, and four deaths.

Thirty-nine of the cases are in Broward county, where the Pompano Beach community is located and which is slowly becoming ground zero for the coronavirus in Florida. Another 23 cases are in Miami-Dade county.

Lammersdorf said she is “just waiting.”

“But I’m worried,” she said. “I’m worried about everything… trying to be as careful as I can.”