If corona can kill, so can obesity 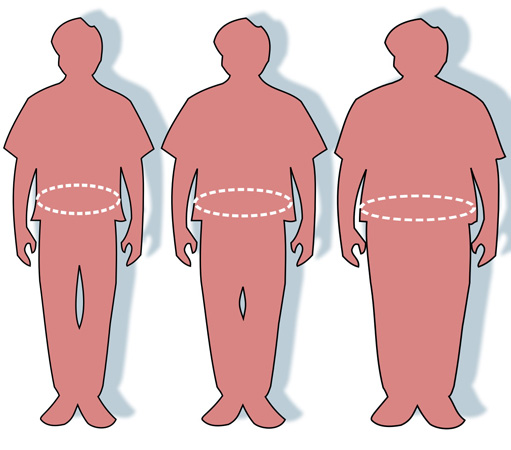 Obesity is currently one of the most common health issue that is increasing day by day and nearly 30 percent of the world population is overweight as more than 60 percent of global disease burden is being attributed from chronic disorder associated with obesity.

Obesity is also a cause of many non-communicable diseases (NCD) due to which globally 60-70% deaths occur.

Around the world, more than one billion adults are overweight and about 300 million of them are obese. In the United States, 66 percent of all adults are overweight and, of those, 32 percent are obese. Obesity levels in Japan and some African nations are below 5 percent, but they’re progressing. Obesity rates in China overall are not high, but in some of that country’s larger cities, rates are up 20 percent.

Obesity is very much common in Pakistan. Pakistan being the 9th most obese nation in the world suffering from its epidemic, affecting all age group, especially in children and females as compared to men and its ratio will be doubled in coming years due to high carbohydrate intake and physical inactivity and other environmental factors. Pakistan is a country where the perception of the healthy diet among the general community is different. Pakistani diet is typically energy dense with a higher percentage of saturated fats, Tran’s fatty acid and free sugar contributing to high calories intake. Use of ghee, meat, judicious use of sweets in celebrating imperative events of life is common in Pakistan. Due to accelerating prices of staple food like vegetables, and fruits, mostly people favour the cheaper ways of energy like fats and sugar. Use of industrially food, fast food, junk food, and sugared fizzy drink are getting very trendy in the younger generation. As per examine WHO states that around 26% women in Pakistan, suffer from the trouble of obesity while just 19% of the men are obese, (56% in men and 67% in women) as compared to rural areas. Even in youth obesity is also growing at a fast pace. Study conducted in the city of Multan, 47% of the people were overweight and obese, while 24.55% were underweight. Pakistan is a developing country facing a “double burden”, comprising disease associated with under development issues leading to poor quality of life (infectious disease and nutritional deficiencies) and non-communicable disorders secondary to urbanization or rapid industrialization. In Pakistan, contributory factors are environmental changes, urbanization, lifestyles modification, consumption of high-density diets, and decrease physical activity, which have resulted in rising burden of overweight and obesity. Studies have identified the variable burden of overweight and obesity among various populations distinct by gender and age groups, including children. Furthermore, various studies have identified the substantial increase in the burden of obesity particularly among children it is very common issue.

The effect of obesity in school going children and medical students respectively.5,6 On another front, an upsetting increase in obesity has been noticed in Pakistani women of reproductive years.

This can be explained by the ‘nutrition shift’ which refers to the transition in dietary habits towards nutrition related diseases. Moreover, another study done in Karachi determined a striking rate of 29% participants to be overweight, and 21% to be obese, the global epidemic of obesity has not spared Pakistan and warrants immediate attention. This is especially important in South Asia, where malnutrition is given its due attention, whereas obesity tends to be overlooked. Not only is obesity an independent determinant of poor health outcomes, it also contributes to other potentially fatal effects.

To overcome from this issue is not easy as it needs perfect attention in each and every thing. Eat more fruit, vegetables, nuts, and whole grains.

Exercise, even moderately, for at least 30 minutes a day.

Cut down your consumption of fatty and sugary foods.

Use vegetable-based oils rather than animal-based fats.

Obesity is a medical condition in which excess body fat has accumulated to an extent that it may have a negative effect on health.

People are generally considered obese when their body mass index (BMI), a measurement obtained by dividing a person’s weight by the square of the person’s height, is over 30 kg/m2; the range 25-30 kg/m2 is defined as overweight.

Obesity is most commonly caused by a combination of excessive food intake, lack of physical activity, and genetic susceptibility.

The view that obese people eat little yet gain weight due to a slow metabolism is not medically supported.

On average, obese people have a greater energy expenditure than their normal counterparts due to the energy required to maintain an increased body mass.

Obesity is mostly preventable through a combination of social changes and personal choices.

Changes to diet and exercising are the main treatments.