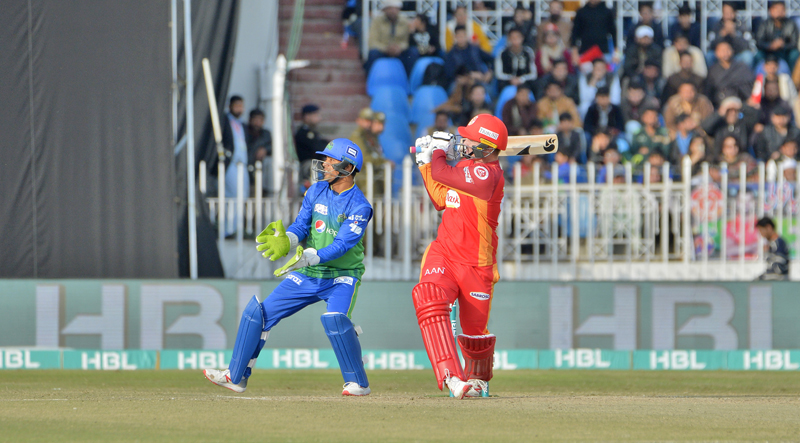 RAWALPINDI: Multan Sultans thrashed Islamabad United by nine wickets in a rain reduced nine-over HBL Pakistan Super League match at the Rawalpindi Cricket Stadium here on Sunday. With the victory, Multan became the first team to qualify for the PSL play-offs. The victory has further consolidated Multan’s stay at the top of the PSL points table. They now have 11 points after seven games (five wins, one no-result, one loss). Islamabad, who have a mere seven points after nine games, have an uphill task ahead to ensure play-off qualification. They not only need to win their last match against Karachi Kings on March 14 but might also have to rely on other results for progress to the play-offs’ stage. Chasing winning target of 92 runs, James Vince’s power-packed innings ensured that Multan cruised to a comprehensive win. Vince came out all guns blazing and smacked the Islamabad bowlers to all parts of the ground. He remained unbeaten at 61 off 24 balls, an innings which included 11 fours and one six. Vince added 68 runs for the first wicket with Zeeshan Ashraf (16) and finished the game off in Moeen Ali’s (14 not out, five balls, three fours) company after Zeeshan was dismissed by Shadab Khan.

Earlier, Multan skipper Shan Masood won the toss and opted to bowl first. Islamabad were restricted to 91 for the loss of seven wickets in their nine overs. Opener Colin Munro top-scored with 25 off 12 balls, all his three sixes were scored of successive balls of a Shahid Afridi over that went for 20 runs. But other than the Afridi over, Islamabad struggled to get the Multan’s bowlers away. Besides Munro, Luke Ronchi with 18 and captain Shadab with 14 were the only batsmen to reach double figures. Leg-spinner Imran Tahir took two wickets for 13 runs in two probing overs while left-armer Junaid Khan took two for 13 in his two-over spell.

On Sunday afternoon, another monumental effort by the ground staff at the Rawalpindi Cricket Stadium ensured the staging of the game after heavy rain had left the outfield considerably wet before the start of the match. The match eventually started after a more than two-hour delay.