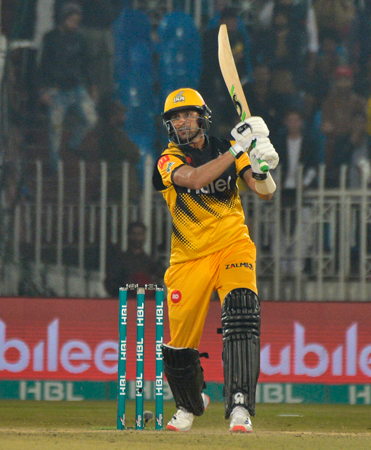 Veteran all-rounder Shoaib Malik played a fine knock of 54 as Peshawar Zalmi outplayed Quetta Gladiators by 30 runs in their HBL Pakistan Super League5 match at Rawalpindi Cricket Stadium here on Thursday evening. Chasing victory target of 171, Quetta, who earlier lost to Lahore Qalandars by 37 runs on Tuesday at Gaddafi Stadium Lahore, could muster only 140 for the loss of seven wickets in 15 overs. The match was reduced to 15-over-a-side after rain delayed the start of the match. With this win, their third in seven matches, Peshawar have leapfrogged Quetta and Karachi Kings to secure third spot with seven points next to their name, while Quetta have slipped to the fifth spot with three wins and four defeats from seven matches.

The defending champions were off to just the start they needed as both their openers — Shane Watson and Jason Roy — had wrestled the run rate of 11.4 under control. However, when Watson departed with the score at 45-1, in walked Ahmed Shehzad, who had failed in each of his previous three innings and this one was no different. His half a dozen runs over almost two overs saddled Roy with the pressure who took one too many risks and got out. A supremely out-of-form Shehzad’s lethargic 17-ball innings ramped up the pressure on the rest of Quetta batsmen that eventually derailed their run chase against Peshawar. When Shehzad departed, Ben Cutting did too and that was that. Quetta lost by 30 runs.

Earlier, a half-century from in-form Malik helped Peshawar score respectable 170 runs for the loss of 6 wickets from their 15 overs. Malik played an impressive innings, scoring 54 runs off 27 balls, hitting eight 4s and a six. His innings came to an end after he was bowled by Mohammad Hasnain. Haider Ali chipped in by scoring 39 runs from 24 balls, hitting two sixes and four 4s before he was caught by Watson off a Hasnain delivery. Peshawar lost Imam-ul-Haq, playing his first match of the season, in the second over and the pressure amplified. Kamran Akmal looked dangerous when he opened for Peshawar, scoring 23 runs from 12 balls, hitting two 6s and an equal number of 4s before he got out, caught by Jason off Hasnain’s ball. The partnership between Malik and Haider followed by Lewis Gregory’s quickfire eight-ball 19 – coming on the back of two sixes – took Peshawar to a daunting total. Hasnain was the pick of the Gladiators’ bowlers, picking up four wickets while Cutting and Sohail took one each.

This week’s line-up of fixtures face a massive threat from bad weather as the Pakistan Meteorological Department (Met Office) has updated its rain forecast, saying that several parts of the country, including Rawalpindi and Lahore are “likely” to receive “widespread heavy rains, thunderstorm winds (with hailstorm)” until Saturday due to a “strong westerly weather system”.