Donald Trump deceived political science but proved his faithfulness to romantic literature. His visit of India seemed more like a homecoming reunion, soaked in sincere emotions and selflessness. Trump repeated his tradition of giving surprises. He spoke his heart out only to shock the Indian media, which after the Air Force One had long taken off was still running amuck, enumerating the takeaways of the Trump-Namaste deal but could not find anything that was beneficial in a political, economic or strategic way. There are the three billion-dollar helicopters, and that too has come with a premium.

The reception, however, truly intoxicated Trump, taking him back to the time of czars and emperors. He must have flown off with the emotion of being a king, enjoying it all until the Air Force One touched down the ground. Guys, this is Trump, President of the United States of America, who understands the thin line between friendship and “trade-ship”. For him, America Comes First, in all its literal seriousness.

Narendra Modi had many wishful dreams, all shattered by the flaky Trump. His chief dream was that Trump should give Pakistan a serious bashing for being a “sanctuary for terrorism.” He had a hope that when he reached the stage erected at Ahmedabad’s Motera Stadium Trump would bash Pakistan. The unpredictable Trump stated that Pakistan was a good friend and a close partner of the USA. That must have mortified and angered Modi and his government. Pakistan came out victorious without even being present. 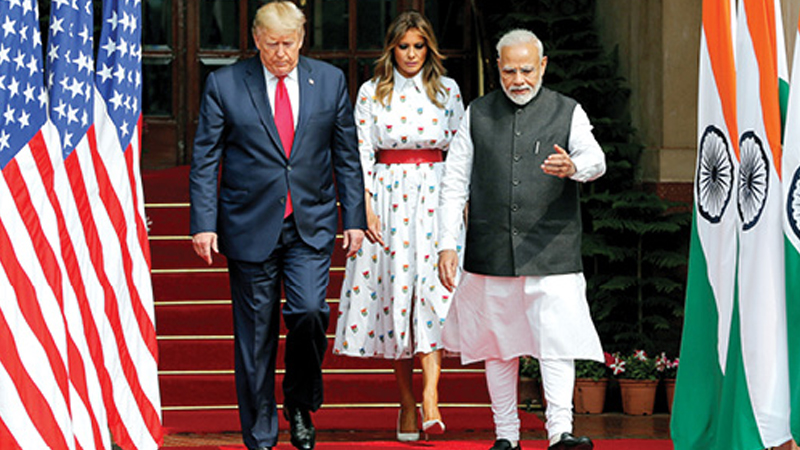 Modi had sky high expectations of easing out trade issues with the US, including the restoration of India’s GSP status and the long-standing issue of tariffs. In that regard too, Trump gave a surprise by throwing the ball in Modi’s court, appraising him as a “tough negotiator,” which would mean no headway in talks. While Modi would relish the appraisal-our South Asian mentality is partial to receiving compliments-Trump played his cards well, avoiding anything solid in terms of easing the trade issues, protecting American trade interests impeccably.

Modi, who also whimsically dreams of India being a parallel to China’s might and economy, wanted Trump to back him with regard to the Indo-Pacific strategy. Trump once more played carefully while making allusions to China’s rise; he avoided any brazen show of fists, which Modi seemed to long for. Trump made it obvious that he was on a “cultural tour” of India, and that there could be no strategic strings that could be attached to his “family visit” of India. As the first day of the visit blended into the second day, the “Modi hugs” also became limited. Trump seemed little enthusiastic about Modi’s regular hugs.

Trump’s visit is over, and Modi is back to his India and its unhealed wounds of CAA and NRC

India did well in staging a spectacular reception for Trump, who really enjoyed his thirty-six hours in India. Indian media, analysts and politicians are criticising Modi of having gained nothing from the Trump visit except the many hugs and the costly helicopters. Indian media tried to see the political, strategic and economic gains of the visit, but could find hardly anything other than the softly pitched words of Trump about the religious radicalisation that India has fallen a victim to under Modi government’s Hindutva.

Trump’s visit of India gave more to Pakistan than it delivered to India. Pakistan is back to being the trusted ally in the midst of US-Afghanistan peace agreement. The political landscape in Pakistan is promising again; Pakistan must capitalise on that to improve its relations with the US. In doing so Pakistan will be able to keep an eye on India, which is, at the moment, embroiled in an internal political and social turmoil. Pakistan’s “Look East Policy” with China also needs to be revitalised. The Kashmir issue needs to be highlighted through good diplomatic channels.

Trump’s visit is over, and Modi is back to his India and its unhealed wounds of CAA and NRC. The optics of the stellar show has now dissipated. The political chaos in India seems out of control as people have taken to streets; the idea of a secular India has been disbanded into a racist and highly ethnocentric chaos. India has narrowed itself to Hindutva. Modi after the brief relief of Trump’s visit of India is back to his homegrown issues and tensions. Now Modi is staring at the miseries of his “divided” India, imagining Trump saying, “Howdy Modi, let’s do it again.”