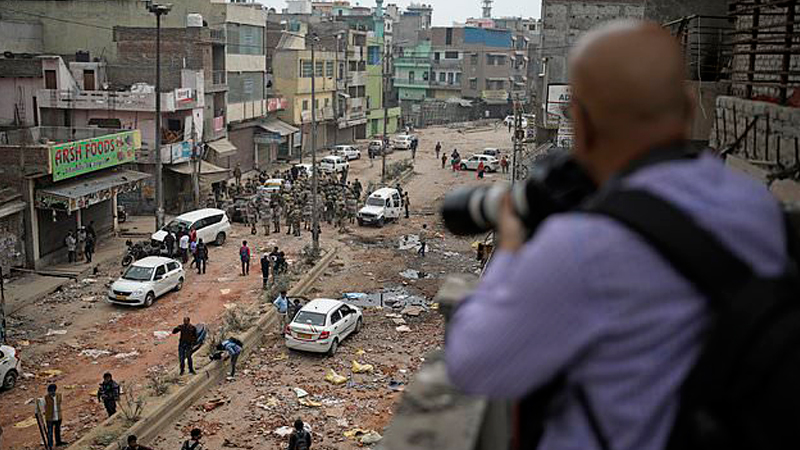 Reporting in India has never been without its risks, but journalists say attacks on the press during last week’s deadly communal riots between Hindus and Muslims in New Delhi show the situation is deteriorating.

One reporter was shot and survived, another had his teeth knocked out, and many more said Hindu mobs demanded proof of religion and tried to keep them from documenting vandalism and violence that included people attacking one another with axes, swords, metal pipes and guns.

Authorities have yet to provide an official account of what sparked the 72-hour clash that left 42 people dead and hundreds wounded, though tensions between Hindus and Muslims have been building for months over a new citizenship law. Nor have they addressed journalists’ allegations that they were singled out by Hindu mobs.

But experts and journalists say the attacks on reporters covering the riots – and censorship of critical content in the aftermath of the violence – are a sign of growing intolerance for independent reporting in India under Prime Minister Narendra Modi’s Hindu-nationalist led government.

Anindya Chattopadhyay, a photographer for the Times of India newspaper, said that as he reached the scene of the riots Tuesday, a man approached him, offering to put a tilak, a mark indicating a person is Hindu, on his forehead.

The man said it would make his work easier. Chattopadhyay refused, but later, after he rushed to take pictures of a building on fire, he was approached by a group demanding to know whether he was Hindu or Muslim, threatening to remove his pants to check whether he was circumcised per Muslim custom.

“I folded my hands and pleaded with them to let me go, saying I was a lowly photographer,” Chattopadhyay recalled.

He noted that while journalists in India have always been targeted for their work, under Modi “the attackers are much more open, furious and fearless.”

Similar demands for proof of religion were made during 2002 riots in Gujarat, Modi’s home state and where he was the chief elected official at the time.

The state erupted in violence when a train filled with Hindu pilgrims was attacked by a Muslim mob and caught fire and 60 Hindus burned to death. In retaliation, more than 1,000 people, mostly Muslims, were killed in the state.

Modi was accused of tacit support for the rampage against Muslims, and was even banned by the U.S. from traveling there, though he was ultimately cleared by a court of wrongdoing and the travel ban was lifted.

Modi’s supporters saw the international criticism of him and pinned the blame for it on journalists and other critics, a feeling that continues today, said Ashutosh Varshney, a professor at Brown University and an expert on India’s history of riots.

“Right since 2002, Hindu nationalists have looked at journalists as part of the problem,” Varshney said.

He said Modi and his followers believe “critical media” is interfering with their plans to build a Hindu state.

Kuldeep Dhatwalia, a government spokesman and director of the federal Press Information Bureau, said he was not “aware of any complaints about press access.”

“It is not correct to link conditions of journalists for coverage of different incidents at different places,” he said. Avowed Modi supporters have already attacked critical commentary of last week’s riots.

Mir Suhail, a Kashmiri cartoonist in New York, adapted a news photograph taken during the riots of a Muslim man crouched in supplication, his traditional garb splattered with blood, with a white-bearded man on his back practicing yoga poses.

Suhail had superimposed a stretching Modi from a video of his morning yoga exercise routine that the prime minister posted online in 2018 and was seen by millions of Indians.

Suhail’s animation was retweeted and praised, but also condemned.

By Thursday, a day after the riots came to an end, Instagram, Facebook and Twitter had removed Suhail’s cartoon, saying it violated community standards on hate speech.

This, Suhail said, is why he had to leave his job at a news organization in New Delhi.

“I can’t publish this cartoon,” he said. “I am also afraid that if I go back to India they will throw me in jail, because this is no big deal for them.”

Ministry of Information and Broadcasting spokesman Saurabh Singh said the government “had nothing to do with” the censorship of the cartoon and episode.

Arvind Gunasekar, a reporter for New Delhi Television News, won’t be able to work again until after he has surgery to repair his jaw, which was shattered during the riots.

He and his colleagues were standing on an overpass Tuesday, using their cellphones to capture a Hindu mob tearing down the walls of a Muslim graveyard. One of the vandals spotted him and grabbed him by the collar, calling the others to join.

The blows came hard and fast as the group chanted pro-Hindu slogans.

Gunasekar’s colleague Saurabh Shukla ran his aid. Shukla showed the attackers the prayer beads hanging from his neck and shouted that he was a high-caste Hindu.

“I had to play that card or else they would have killed him. They were about to throw him over the (overpass),” Shukla said.

The mob made Gunasekar unlock his phone and delete the videos he had recorded.

“There are no more journalists here, only nationalists and anti-nationalists, according to our government,” he said. “And such identities are passed all the way down and we are ending up as victims at the hands of the polarized crowd.”