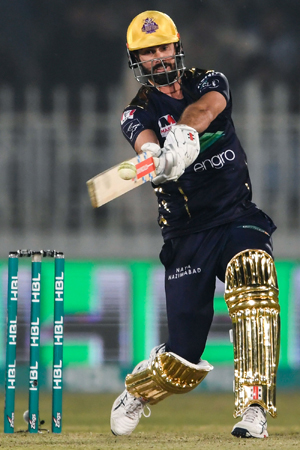 RAWALPINDI: Defending champions Quetta Gladiators defeated Islamabad United by five wickets in a thrilling contest of the Pakistan Super League 5 at Rawalpindi Cricket Stadium here on Thursday night. Chasing a formidable target of 188, Quetta raced home for the loss of five wickets in 19.4 overs. Jason Roy (50), Sarfaraz Ahmed (33) and Ben Cutting (42 not out) were the main contributors for the winners. Jason gave an excellent start to the Gladiators, scoring 50 runs from 38 balls. He hit two sixes and six 4s. Cutting was instrumental in helping Quetta see the match through as he played a swashbuckling knock off 17 balls, featuring four huge sixes. Quetta looked in trouble at one point in time when Shane Watson fell cheaply for 9 runs from 8 balls, hitting only two boundaries. Ahmad Shahzad continued his poor form of the tournament, getting dismissed by a Shadab Khan delivery when he was only on 12 runs. Azam Khan, on whom Quetta have depended so far, failed to live up to expectations as he got out on 10 runs from 11 balls. Nawaz gave him much-needed support from the other end, scoring undefeated 25 off 20 balls to see his team through.

Earlier, Islamabad made 187-7 after Quetta won the toss and opted to field first. Colin Ingram pulled the team back from the brink, scoring a cool 63 runs off 40 balls. He hit two sixes and six 4s during his innings. The team looked to be in a precarious position after losing three wickets during the first few overs of the match. Luke Ronchi and Dawid Malan were dismissed during the first and third overs, respectively, courtesy excellent bowling by Naseem Shah. Shadab Khan contributed by scoring 39 runs off 25 balls, hitting two sixes and three boundaries before he was caught by Mohammad Nawaz off a Cutting delivery. Colin Munro, who looked really dangerous, was caught near the boundary by Ahmed Shahzad off a Mohammad Hasnain delivery. He scored 31 runs from 20 balls, hitting three sixes and two boundaries. Tymal Mills claimed two quick wickets, dismissing Amad Butt and Asif Ali cheaply. Mohammad Hasnain chipped in with one.