Nestled in between Asia and Europe, Azerbaijan is bordered by Russia, Georgia, Armenia, Turkey and Iran. On the East lies the Caspian Sea. Swans, flamingos and pelicans all migrate to this region. Much of the north and west are covered by the Caucasus Mountains, where roe deers, brown bears and lynx thrive. One must be astounded to find out that Azerbaijan holds a very integral monopoly over trade and energy between Asia and Europe. In parts of Azerbaijan, including just outside the capital city of Baku, the land is dotted with such oil and petrol reserves. These are areas where oil and petrol can be extracted from the earth and used as fuel. Thus, as a result, volcanoes have formed above some of the reserves. But instead of spewing lava, the volcanoes erupt with a muddy mix of water, sand, petrol and sometimes oil. This forms the major energy resource of Azerbaijan. That muddy mixture is also used in medicines and cosmetics. 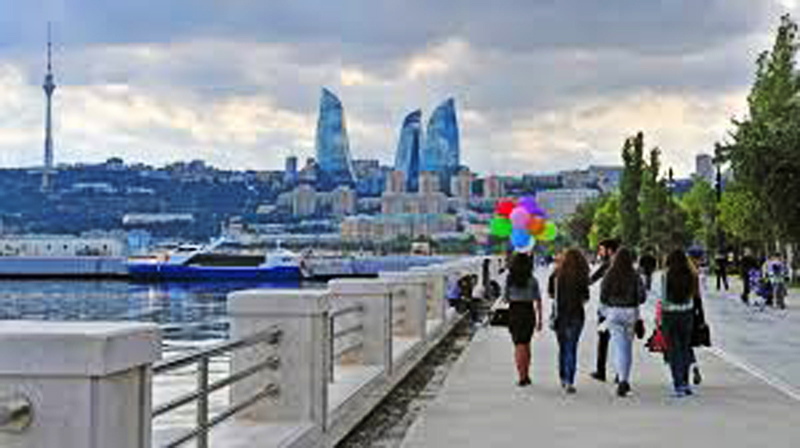 Bordering the “Land of Fire” is Armenia with its meagre occupation of almost one-fifth of Azerbaijan’s territory. If that is considered, all that is left is a narrow 60-mile-wide exclave that holds a cardinal value in Azerbaijan’s trade. This strip of land or corridor between the two is known as the “Ganja Gap” – named after Azerbaijan’s second-largest city, Ganja, which sits in the middle of this narrow passage. This “gap,” without a shadow of a doubt, can be called the heart of Azerbaijan as all of the trade with Asia relies on this narrow passage; making Azerbaijan the helm of complete economic dominance within Europe.

However, the Russians are not letting this go by. As they hold enough influence over Azerbaijan’s rival neighbour, Armenia – giving them a dangerous opportunity to threaten the “Gap” itself but Azerbaijan has some real friends on the globe who have stood with it in times of need like Pakistan. Azerbaijan’s relations are soon taking a turn for best.

Currently, there are three major oil and gas pipelines in the region, which bypasses Russia and Iran and runs through the 60-mile-wide Ganja Gap. The Baku-Tbilisi-Ceyhan pipeline runs from Azerbaijan through Georgia and Turkey and then to the outside world through the Mediterranean. The Baku-Supsa pipeline transports oil from the Caspian Sea to the Black Sea. The South Caucasus pipeline runs from Azerbaijan to Turkey, and which is going to link up soon with the proposed Southern Gas Corridor to deliver petrol to Italy and then to the rest of Europe. Therefore, Azerbaijan has the potential to become the forerunner in providing energy and fossil fuel throughout the powerhouse countries of Europe.

Apart from being a country that plays an integral part in the economic long run, the country is brimming with cultural heritage and traditions that sparked interest among many travellers. These travellers frequently flock to Azerbaijan to seek peace in this tranquil “land of fire.”

Azerbaijan shares great similarities with Pakistan when it comes to food, traditions and the language, which has a great number of words that are found in Urdu as well.

Azerbaijani culture consists of music, literature, folk dances, art, cuisine and architecture. Azerbaijan is one of the oldest centres when it comes to hand-woven rugs and carpets of different sizes and designs. The culture prevalent in this intriguing country lies a blend of both western and eastern ideologies, which have been etched right down to the very stones and bricks used to construct buildings that boasted of Islamic flamboyance such as the “Palace of Shirvanshahs.”

Others showcase western-inspired Byzantine and eastern Europe’s baroque style of architecture like the government hall and Milli Majlis (Parliament) in Baku.

The country is predominantly Shiite Muslim; bolstering a 97.4 per cent of the total population. This demographic alone tells us about the Islamic roots sprouting within the country. The country is home to the sanctuary of Ashabi-Kahf. In Arabic, Ashabi-Kahf means “The Cave Possessors.”

It is located in a natural cave in the eastern part of the city of Nakhchivan. The Nakhchivan Autonomous Republic is a part of Azerbaijan, and its capital is Nakhchivan City. There are no land routes from Baku to Nakhchivan because Armenia is in the middle of the two while Azerbaijan and Armenia have a territorial conflict.

Since ancient times, Ashabi-Kahf is considered a sacred place where seven men, also known as the “men of Angelos” or seven sleepers, who slept in the cave for centuries before waking up again.

The country is also the sacred resting ground for Prophet Noah, which is visited by many tourists. The current mausoleum was built in 2006. There is a ladder leading to a burial vault. There is a stone column in the middle of the vault. They say the relics of Noah are under this column. A portrait describing the mausoleum of Noah 100 years ago painted by Bahruz Kangarli is also saved in the National Art Museum of Azerbaijan. It is still unclear where exactly Prophet Noah is resting as many sites claim to be having the Tomb of Prophet Noah like Imam Ali Mosque in Najaf, Iran; in Al-Karak, Jordan; in Karak Nuh, Lebanon, and in Cizre, Turkey.

Among other architectural treasures are Quadrangular Castle in Mardakan, Parigala, several bridges spanning the Aras River and many mausoleums. Baku Old City, within the gates along with its Maiden Tower, dates back to the 11th century.

The most recent architectural monuments are the Baku subways, noted for their lavish decor. Other contemporary architectures like Heydar Aliyev Cultural Center, Flame Towers, Baku Crystal Hall, Baku White City and SOCAR Tower have transformed the country’s skyline and promote its contemporary identity.

The constitution of Azerbaijan is also an exemplary aspect of the country as it highlights some of the most integral laws that have been laid down without any change since its genesis within the country’s legislature. The Preamble to the Constitution specifies to provide prosperity and welfare of the whole society and every individual while maintaining a secular civil society, which observes all human values.

The writer is a television presenter and producer at Hum News. She is an International Alumni Ambassador for Manchester Metropolitan University, the UK.