Children and media: what are the options for parents?

A few days ago, our family friends shared, on a lighter note, that their children had gone crazy behind screens of cell phones, laptops and television. They were wondering how to keep an eye on their children and how to find appropriate material for them to watch. “We are puzzled about the selection of suitable audio-visual material for our children,” one of them said. I listened to them in silence, but I was thinking that perhaps my children were facing the same issues. Many of us have same problems of media and information selection for our children.

I had an experience in the upper districts of Sindh; I was there on a field trip. When I talked with children about television programmes, they mentioned some names. I was stunned to see children acting as adults. The shows they mentioned had dialogues in language for adults, use of weapons, violence, and unsuitable gestures. Children watch these shows with their parents because they have no other options.

Viewing of content made for adults is problematic and can give rise to violence and abuse, the stories of which we frequently see in media. The increasing rate of child abuse could have a linkage with the informal learning through television shows, movies and other internet-based media. That requires an in-depth research.

The dramatised versions of the adult life, when presented in front of children, may give them ideas about their future adulthood. They have their role models, and they follow their actions. Though children have not experienced any of those events in real life, they may learn to think like the adults doing those things. Not many people explain things to children. If we understand in words of Buddha, children who are fed lies breed violence. The time has come to discuss the different forms of violence among children that they unconsciously learn through television.

Currently, on many channels, the drama themes revolve around love, marriage, divorce, conspiracy, corruption, sadism, and other misbehaviours and evils

Choosing the right thing for their children to watch is a problem for parents. They want them to spend time on constructive things. Television viewership adds nothing in children’s learning and development. Though the number of television channels is increasing, there are no specific programmes and channels for the thirty-five percent of the population of Pakistan: children. According to a Gall-up survey, boys of 15-17 years spend 122 minutes, and girls of that age spend 127 minutes per day watching television. About 45 minutes of television viewership has declined between 2008 to 2017. It is due to the excessive use of smartphones, computers, video games, and other internet-based gadgets. 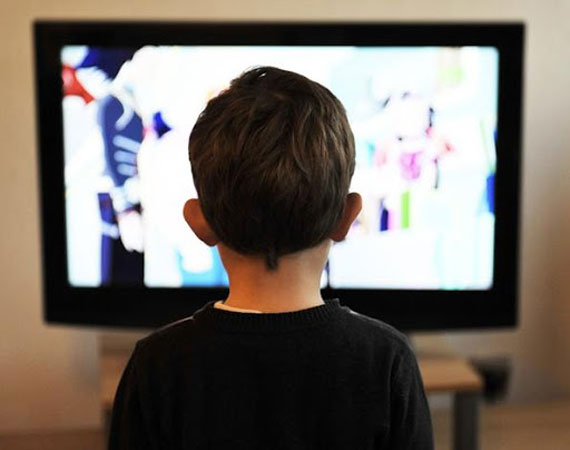 According to the Internet World Stats in 2000, only 0.1 percent of the population used the internet; in 2018, it reached 22.2 percent. As per the Pakistan Telecommunication Data, cell phone users in 2018 were 151 million. The data on children’s use of smartphones is unavailable.

The use of internet and television viewership cannot be avoided. Both are learning and development tools for children in the modern times. But children must be guided in their selection of stuff to watch and to discuss the effects of media messaging on children’s learning, psychology and development. Much is said about children’s behaviour and the negative effect of technology on their bodies, but not much is done to check what children are watching on television, internet and smartphones. These gadgets are considered a babysitter, a hobby and a way to keep children engaged.

When you go through the content television offers for viewership, you can decide what your children should watch. Children’s programmes are adjusted according to the available time on different channels. The programmes are mostly cartoons. Even now, we do not have any indigenous cartoon characters or programmes for our children to watch. Foreign content is watched because locally made cartoon programmes are not interesting enough to catch the attention of children.

According to another Gallup Survey of 2017, 67 percent Pakistanis feel that there are certain dramas on television that are not viewable with the entire family. This survey asks that if dramas have such scenes, dialogues, clothing and gestures that are unsuitable for adults to view in company of one another, what effects do children get from them. The mid-fillers are advertisements; a major source of revenue is given substantial time on television channels. Malcolm Muggeridge said: “History will see advertising as one of the real evil things of our time. It is stimulating people constantly to want things, want this, and want that.” Multiple researches have been carried out to study the effects of advertisement, dramas, news, and crime shows on children.

Advertisements entice customers to buy products. As it is difficult to segregate audience, every advertisement is seen by children, who, in turn, compel their parents buy them things they see on TV. Some adolescents from low-income families do criminal things to have access to stuff that is promoted on television.

Advertising agencies come up with many advertisements directed at children and that is not a bad idea, but the message remains the same. Advertisement agencies should find out if the topics of the ads meant for children are taught at school level or are part of their curriculum. If they are not part of a child’s prior knowledge, the message may develop multiple connotations in the minds of children.

We need to learn about the process of how television sends its message to its viewers. Information on television is homogenous in access to viewers of all ages. That is the reason why it cannot be compartmentalised for adults, adolescents and children. When all viewers are exposed to the same information, the line between childhood and adulthood is erased. The information makes its way without any instruction.

We know that there are some aspects of life that children need to be exposed to in different stages of life. There are certain mysteries, tragedies and stories that are considered unsuitable for children; we tend to keep children away from them. But through television those things are revealed to them in a way that many children are unprepared to manage. All adult secrets-social, physical, sexual-are exposed to children easily. Currently, on many channels, the drama themes revolve around love, marriage, divorce, conspiracy, corruption, sadism, and other misbehaviours and evils. When children watch them, they take the ideas as the existing culture. There is hardly any theme of drama on positive social behaviour, history, life skills and education.

It is said that children have lost innocence. It is because children continuously watch adults, adult behaviours and adult jokes. Children have disappeared from television. Children’s roles are selected to support the adults’ roles. Children do not have roles that include jokes, mysteries, and stories of support, sharing and innovation of people their age. Their roles on television get immersed in adult roles. It seems that television channels think that childhood is not necessary or desirable.

The thing that we need to understand is that our communication is transformed by electronic media, which has the power to “convert.” Print media, books and periodicals have that power. Books and print media need skills to read, comprehend and understand, but electronic media doesn’t need any skills. We see that where no skills are needed no output is expected. No one is bothered to invest to prepare programmes for children or start a children-specific television channel.

We need to realise that children and youth in Pakistan make a substantial part of the population. Owing to the less quality entertainment infrastructure in society, children hardly enjoy and learn in a fresh atmosphere. Places where some entertaining options for children are offered are expensive and out of the reach of a large portion of the population. The only cheap, accessible and safe option for children’s entertainment is television and the internet if it is made suitable for them.

In today’s it is difficult to keep children away from audio-visual media. Parents should discuss the effects of television dramas, news, cartoons and advertisement with their children. They should concentrate on educational values and link that with formal learning and development. Children could be encouraged to analyse, criticise and make suggestions for television programmes. Parents should help children to make a differentiation between reality and fantasy, true and fake information, and adaptation and rejection of imitated behaviours.

A children’s room should not have a TV; they should watch TV with the rest of the family. Time to watch television, use a smartphone and the internet should be kept limited. Parents should make sure that children watch television and use a smartphone in front of them. If that is not possible, try to keep an eye on what they are doing. Always pay attention to cartoons, dramas, and advertisements to see what ideas are being promoted to children. Discuss with children the different aspects of what they have watched. Parents need to develop in their children reflection and critical thinking for using media, especially television. If it is difficult for parents, learning starts with reading.