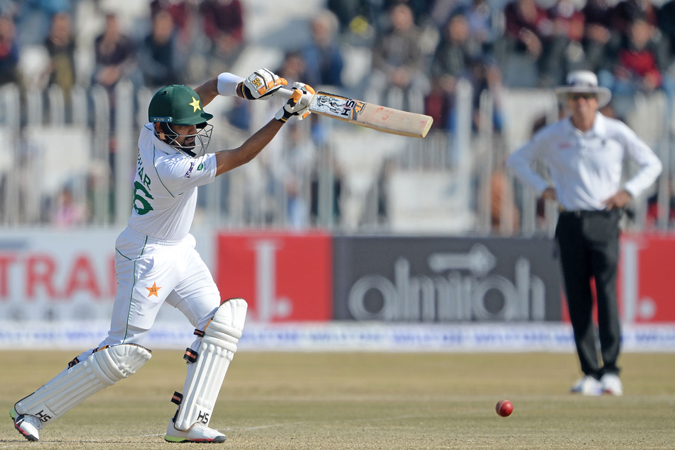 RAWALPINDI: Batsmen Shan Masood and Babar Azam hammered centuries as Pakistan took control of the first Test against Bangladesh at the Rawalpindi Cricket Stadium here on Saturday. Pakistan moved to a solid 342 for the loss of two wickets on day two for an overall lead of 109 runs with seven wickets still in hand after Bangladesh were dismissed for 233 in the first innings. Babar capitalised on an early reprieve to score a career-best 143 not out when bad light forced early stumps. Babar raised 137 runs for the burgeoning fourth wicket stand with Asad Shafiq (60) who looked on course to be the third centurion in the Pakistan innings. Abu Jayed claimed two wickets for Bangladesh who endured a tough day after managing a below-par first innings total on Friday.

Abu drew first blood when he dismissed opener Abid Ali for a duck in the second over and went on to claim the wicket of home captain Azhar Ali who made 34. Babar was on three when Ebadat Hossain dropped him off Taijul Islam and it proved a costly mistake as the right-hander went on to forge century-plus partnerships with Shan and Asad. Shan, Lefthander Shan, who also made a hundred against Sri Lanka at Karachi in December, scored 100, which included 11 boundaries, before being bowled by Taijul. Shan featured in two solid partnerships and took the game away from Bangladesh as he added 91 runs with Azhar and then contributed a further 112 for the third-wicket stand with Babar.

“We were lucky that we got some runs early on and it sort of allowed us to be more confident,” Shan said. “When you’re playing in home conditions it makes a bit easier, but in international cricket, especially in Test cricket, there’s nothing easy.” Babar and Asad then feasted on Bangladesh’s wayward attack, scoring at nearly four-an-over during their unbroken stand. Babar hit 19 boundaries and a six to keep alive his hopes of a maiden Test double century.

Bangladesh were originally scheduled to play three Twenty20 Internationals and two Test matches, but agreed to split the tour into three phases because they did not want to stay in Pakistan for a longer duration due to security concerns. After this Test, the side will return to Pakistan in April for a one-off One-Day International (April 3) and the second and final Test (April 5-9) at the National Stadium in Karachi. Pakistan won the T20 series 2-0 last month at Lahore, with the third game abandoned because of rain.