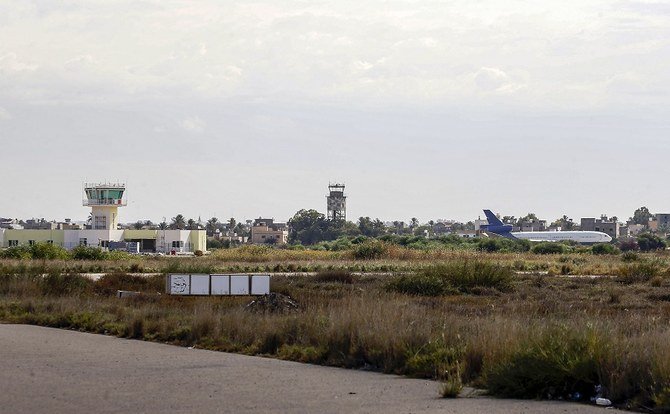 MOSCOW: Turkey does not plan to send more military advisers to Libya while a cease-fire is being observed, Russia’s RIA news agency cited Turkey’s foreign minister as saying on Thursday.

This comes as renewed threats from forces loyal to strongman Khalifa Haftar has forced Libya to close its only operational airport, dealing another setback to peace efforts as regional foreign ministers prepare to meet in Algeria Thursday.

The airport has been hit multiple times since the start of a months-long offensive by fighters led by eastern-based commander Haftar to seize Tripoli from the UN-recognized Government of National Accord (GNA).

“Any military or civilian aircraft, regardless of its affiliation, flying over the capital will be destroyed,” warned Haftar’s spokesman Ahmad Al-Mesmari, adding that such flights would be considered a violation of a cease-fire in place since January 12.

Mesmari said the internationally-backed government was using the airport for military purposes as a base for Turkish soldiers sent by Ankara to support GNA leader Fayez Al-Sarraj.

The airport earlier Wednesday suspended flights for several hours after it was targeted by six Grad rockets in an offensive the GNA blamed on its rivals in Libya’s five-year civil war. The attack took place just nine days after the facility reopened following a truce.

World powers have stepped up efforts in recent weeks to find a political solution to the grinding conflict, with neighboring Algeria the latest country to host a meeting — set for Thursday — to discuss ways forward.

The Algerian foreign ministry said chief diplomats from Tunisia, Egypt, Sudan, Chad, Niger and Mali would meet in Algiers to advance “a political settlement to the crisis through an inclusive dialogue between all parties.”

Algeria, which has stayed neutral in the Libyan conflict, shares a border of almost 1,000 kilometers (620 miles) with its neighbor, which has been rocked by violence since the 2011 toppling of dictator Muammar Qaddafi by NATO-backed insurgents.

It did not say whether Libyan delegations had been invited to the meeting but the GNA Foreign Minister Mohamad Tahar Siala issued a statement saying he was “refusing” to take part due to the presence of his counterpart in the rival administration backed by Haftar.

The meeting comes after a summit in Berlin which saw world leaders commit to ending all foreign meddling in Libya and to upholding a weapons embargo as part of a broader plan to end the conflict.

The summit plans have also seen the formation of a military commission comprising five GNA loyalists and five Haftar delegates who will seek to define ways of consolidating the cease-fire.

On Tuesday, the UN Security Council urged the parties to reach a long-term deal paving the way for a political process aimed at ending the conflict.

Despite repeated appeals from the UN’s envoy to Libya, Ghassan Salame, Tripoli’s GNA-held airport has been the target of several air raids and rocket strikes since Haftar’s forces launched their offensive in April.

Located east of the capital, Mitiga is a former military air base used by civilian traffic since Tripoli international airport was heavily damaged in fighting in 2014.

GNA forces spokesman Mohammed Gnunu branded the strikes a “flagrant threat” to the safety of air traffic and a “new violation” of the most recent cease-fire.

Haftar’s forces did not immediately respond to Wednesday’s accusations from the GNA but did say they had shot down a Turkish drone after it took off from the airport.

Haftar’s fighters accuse the GNA of using Mitiga to attack their troops in southern Tripoli, something the GNA denies.

Turkey has backed the GNA, deploying troops to Libya since early January under a controversial November deal with the Tripoli-based administration.

Turkish President Recep Tayyip Erdogan is expected in the Algerian capital on Sunday at the start of a two-day visit also tied to the Libyan conflict.

The city has hosted a string of foreign leaders and envoys for talks on the crisis, including Italian Prime Minister Giuseppe Conte and the top diplomats of Egypt, Italy, Turkey and former colonial power France.