* He smiled and said that Bruno Ganz, the man who plays Hitler, is Germany's best actor 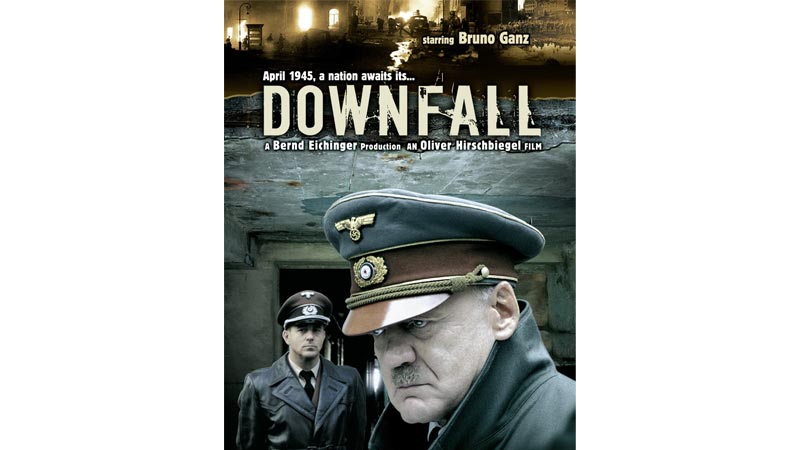 A few years ago, I found myself staring at a parking lot in Berlin. However, this was no ordinary parking lot. Not too far away were the buildings that had once served as headquarters of the Luftwaffe and the Gestapo. Across the street was the Holocaust memorial. So much history had taken place here. Being there made my hair stand on end.

There was a big sign at the entrance to the parking lot. It read “Fuhrer Bunker” in German. I asked the driver of the rickshaw was also doubling as a tour guide if this was where Hitler had spent his final months in 1945. He said yes.

I told him just a few months before coming to Berlin I had watched a movie, Downfall. It was based on the diary of the young woman who had served as his secretary from 1942 to 1945. I said I was mesmerized by the actor who portrayed Hitler in the movie. He made me feel like I was in the bunker with the Fuhrer as it was being shaken by Soviet artillery fire.

He smiled and said that Bruno Ganz, the man who plays Hitler, is Germany’s best actor. He added that he, the driver, was one of the extras in the movie. I watched it again last night.

The movie, Der Untergang, is in German with English subtitles. However, after watching it for the first few minutes, I forgot that I was reading subtitles. I was transported back in time to April 1945 when Hitler was celebrating his birthday in the bunker with little children singing patriotic songs.

Ganz, who spent months researching the Fuhrer’s style and picking up the Austrian accent, portrays Hitler with a searing intensity not before seen on film. Hitler comes across as an old man who knows his end in near. No one is listening to him. The generals mock him behind his back. They don’t follow his orders to destroy bridges and buildings.

He still gets the Heil Hitler salute but little else. He refuses to leave Berlin knowing that the Soviets are at the gate. Afflicted with Parkinson’s disease, walking around with a bent back and a shaking hand, he alternates between rage and despair. He knows that death is staring him in the face.

Hitler did not drink nor smoke. Nor did he eat meat. Perhaps he did not believe in killing animals. He had a pet dog, an Alsatian, which he fed personally. He hugged and kissed kids.

How could such a man commit some of the most heinous crimes in human history? How could he think that the Aryans were the best of all human races and that the Jews were a poison? These questions are not addressed in this movie.

The focus is on the last days of Adolph Hitler. He is shown growling at the German high command in the bunker. He loses his temper as bad news keeps pouring in. In one scene, he yells at the generals, “What did they teach you in the academies? Perhaps all they taught you was how to use the knife and fork at dinner. I did not attend any academies. Yet I have single-handedly conquered Europe.”

In the final days, the Soviet Air Force had complete mastery over the skies above Berlin. The Luftwaffe has ceased to exist. The Red Army was pounding Berlin with heavy artillery. The infrastructure was crumbling. Water and power supply had become intermittent. The hospitals had run out of medical supplies. Food was scarce.

The film ‘Der Untergang,’ is in German with English subtitles. However, after watching it for the first few minutes, I forgot that I was reading subtitles. I was transported back in time to April 1945 when Hitler was celebrating his birthday in the bunker with little children singing patriotic songs

Hundreds of thousands of civilians were trapped in Berlin, which had turned into an insufferable hell. Hitler, insensitive to their plight, callously declared that in times of war there were no civilians. Everyone had to fight for himself or herself.

Brooding over their fate, he called them “inferior people” and said the brave had already died. He walked around a 12 ft. long architectural model of Berlin that Albert Speer had laid on a long table for him. Hitler marvelled at the model and said it evoked the grand edifices of ancient Greece and Rome. He said that once this crisis was over, the Reich would be born again and live on for a thousand years. Speer who knew better just stayed quiet.

One day Hitler received a message from the head of the Luftwaffe, Hermann Goring, stating that he intended to take over command since Hitler was not unable to communicate with anyone else. A fuming Hitler declared Goring a traitor and ordered his execution.

He also discovered that Heinrich Himmler, his deputy, was engaged in secret negotiations with the Allies and ordered his execution as well. Himmler was hoping to negotiate a surrender with the Allies on the expectation that they would then team up with the Nazis to prevent the Soviets, “the Asian hordes,” from taking over Berlin.

Finally, Hitler ordered that Operation Clausewitz be unleashed against the invading Soviet army. This required Berlin to be “defended to the last man and to the last bullet.” Berlin would be converted to a front line city. All Wehrmacht and SS offices would be relocated elsewhere and martial law would be imposed. Civilians found disobeying the authorities would be killed.

Unsurprisingly, the operation called for divisions to be moved into battle that had long ceased to exist. Hitler was oblivious to the ground realities. Clausewitz died at birth. The Red Army entered Berlin with almost no resistance.

Hitler committed suicide with Eva Braun. She had been his long-standing girlfriend. In the weeks leading up to the end, she had thrown a wild party in the bunker where everyone got drunk. The climax came when she stepped onto a table and danced the night away.

Hitler and Braun were cremated in the Chancellery garden. The propaganda minister Joseph Goebbels succeeded Hitler and declared that Germany would not surrender. That night he asked his wife to poison their six children with cyanide. Then she and Goebbels committed suicide. Germany surrendered unconditionally to the Soviets and the Third Reich passed into history. Hitler’s top aides including several generals who survived the war were arrested and tried at Nuremberg. Some were convicted and hanged. Others were given long prison terms.

Albert Speer was one of them. In his memoirs, Inside the Third Reich, he tried to absolve himself of his sins. Decades later, it was found out that he was totally aware of the Holocaust and had done nothing to stop it. He died in ignominy.