Broken Wings is a tale about the love of two souls, who are destined to be apart 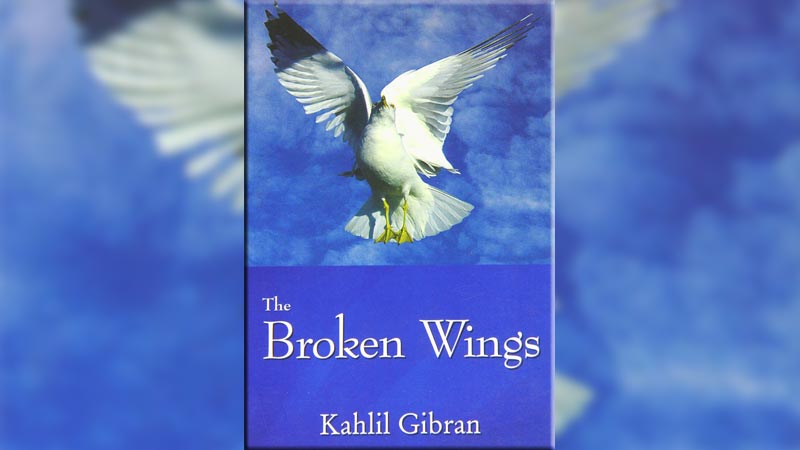 “As the rays of the moon shone on the face, neck and arms of Selma, she looked like a statue of ivory sculptured by the fingers of some worshiper of Ishtar, goddess of beauty and love.

As she looked at me, she said, ‘Why are you silent? Why do you not tell me something about your past?’ As I gazed at her, my muteness vanished, and I opened my lips and said, “Did you not hear what I said when we came to this orchard? The spirit that hears the whispering of flowers and the singing of silence can also hear the shrieking of my soul and the clamour of my heart.”

The novel Broken Wings is a tale about the love of two souls, who are destined to be apart. Broken Wings is more of a heart-breaking story than a romantic one. It is written by the famed author Kahlil Gibran.

Writer and poet Kahlil Gibran was a Lebanese-American author. He was born in 1883 in Bsharri, Mount Lebanon Mustasarrifate. Later, moved to the United States in 1895. He wrote a number of books, including Broken Wings, The Madman and The Prophet. Having written The Prophet, he become one of the well-known authors around the world. The Prophet was published in 1923. And was translated into more than 100 languages.

Kahlil was also a poet and visual artist. The Novel al-Anjniha al – Mutakassira (Broken Wings) is a tremendous mixture of poetry engraved in every line of the story. Which gives the reader a sense of imagination. It was written in Arabic. And published in 1912.

Moreover, one can find love, pain, social issues, rights of women and religious deception. He illustrates the contractors of religion. He has not written against the religion but rather wrote about those who use religion to fulfill their personal ambitions.

However, the characters in the novel may be imaginary but the feelings in it could be felt by everyone. The author starts the story with the major character, who is a young 18-year-old Lebanon student. One day, he meets Faris Effendi Who was an old friend of his father. He is a rich and respected man in the society. He invites the young man to his house because he reminds him of his father. He goes to visit him, where he found his first love Selma Karamy.

“As I dismounted and entered the spacious garden, I saw Farris Effandi coming to meet me. He ushered me into his house with a hearty welcome and sat by me, as a happy father when he sees his son, showering me with questions on my life, future, and education. I answered him, my voice full of ambition and zeal; for I heard ringing in my ears the hymn of glory, and I was sailing the calm sea of hopeful dreams. Just then a beautiful young woman, dressed in a gorgeous white silk gown, appeared from behind the velvet curtains of the door and walked toward me. Farris Effendi and I rose from our seats.”

Writer and poet Kahlil Gibran was a Lebanese-American author. He was born in 1883 in Bsharri, Mount Lebanon Mustasarrifate. Later, moved to the United States in 1895. He wrote a number of books, including Broken Wings, The Madman and The Prophet. Having written The Prophet, he become one of the well-known authors around the world

This is my daughter Selma,” said the old man.

Firstly, the story goes smoothly than one night a man appears in the house of Farris Effandi and takes him to the Bishop of the town. Where the Bishop demands his daughter to marry his nephew Mansour Bey Galib. Soon, she gets married and leaves the young man behind. “Thus destiny seized Selma and led her like a humiliated slave in the procession of miserable oriental woman, and thus fell that noble spirit into the trap after having flown freely on the white wings of love in a sky full of moonlight scented with the odor of flowers.”

After her marriage and father’s death. They used to meet secretly in a temple. But their secret was revealed and she stopped visiting him. A few years passed and the last thing he heard about her was the news of her death. She was died giving birth to a child and one last time he visits her.

“but I stood lonely aside without a soul to console me as if Selma and her child meant nothing to me.

The farewell-bidders left the cemetery; the gravedigger stood by the new grave holding a shovel with his hand.

As I approached him, I inquired, “Do you remember where Farris Effandi Karamy was buried?”

He looked at me for a moment, then pointed at Selma’s grave and said, “Right here; I placed his daughter upon him and upon his daughter’s breast rests her child, and upon all, I put the earth back with this shovel.”

Then I said, “In this ditch, you have also buried my heart.”

As the gravedigger disappeared behind the poplar trees, I could not resist anymore; I dropped down on Selma’s grave and wept.”

Broken Wings is a poetic novel written in Arabic by Kahlil Gibran and first published in 1912 by the printing house of the periodical Meraat-ul-Gharb in New York.

It is a tale of tragic love, set at the turn of the 20th century in Beirut. A young woman, Selma Karamy, is betrothed to a prominent religious man’s nephew. The protagonist (a young man that Gibran perhaps modeled after himself) falls in love with this woman. They begin to meet in secret, however they are discovered, and Selma is forbidden to leave her house, breaking their hopes and hearts.

The book highlights many of the social issues of the time in the Eastern Mediterranean, including religious corruption, the rights of women (and lack thereof), and the weighing up of wealth and happiness.

The book was later adapted as the 1962 Lebanese film The Broken Wings.