* Passion, dedication, hard work, faith and hope leads one to reach the point where they want to be 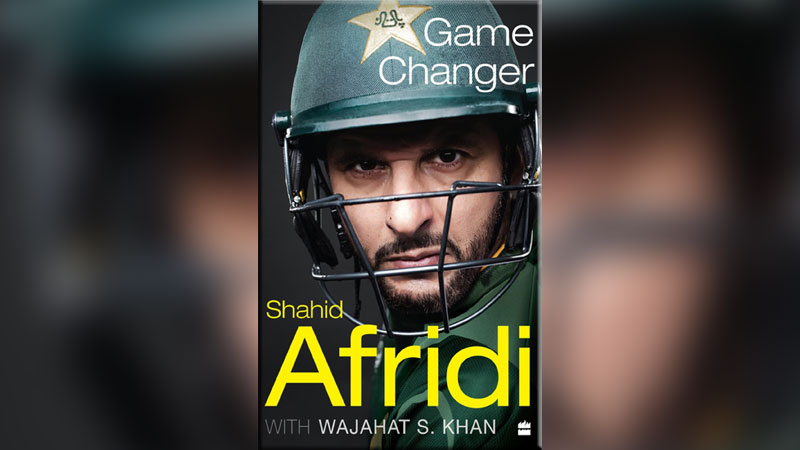 Autobiographies are of those who have done something unusual and extraordinary in their lives and have inspired others to follow them in their footsteps.

Game Changer is one of them.

Passion, dedication, hard work, faith and hope leads one to reach the point where they want to be. Same is the case with Game Changer. His name Sahibzada Mohammad Shahid Khan Afridi was born in Tirah, Maidan, the valley of mountains of Khyber, the northwest region of Pakistan. In these mountains lived the Afridi tribesmen famous for the reputation of fighting be it Mughals, British and or defending their motherland by serving in Pakistan’s army. Afridi pathans are strong in physique. Their hardness is considered an asset. There is a famous saying about pashtuns in Pakistan that “when pashtun is not working, he is fighting”. Shahid Khan Afridi has six brothers and five sisters and he himself is at number five.

The book is the first autobiography of this legendary cricketer. The book Game Changer is actually a conversation with journalist Wajahat Saeed Khan. A young boy of 19, who in his first international debut cricket match at Nairobi on October 4, 1996 scored a 37 ball century against the then world champions Sri Lanka and rose to fame and becomes the hero and star of millions of people across the globe.

Afridi credited his uncle who was a colonel in Pakistan army for introducing sports in the family especially cricket. Afridis father was against his sons’ passion for cricket, he many times beat his son (Afridi) for not doing well in academics as he spent most time playing cricket.

Shahid khan Afridi regets for not giving good attention to academics as he felt that without sound academic a person feels like handicap.

Shahid Khan Afridi in his book talks about the passion he was for the game of cricket. He says that the passion was so intense that when in my home everyone fell asleep at night I did sneak and jump over the walls of my house to take part in the Karachi-late-night tape-ball tournaments and came back home at around four o clock in the morning by jumping over the walls of the house exhausted and then wake up at seven to get ready to attend the school, and play the day matches at school. In his own words he called it madness and said it was madness. And I was mad. Cricket mad.

Shahid khan Afridi claimed that it was actually Karachiite who invented T20 cricket game as they mostly played it during the nights of Ramadan in the streets of Karachi as there were no big play grounds available in those days in this mega city.

Afridi talks about some of the experiences and events when he played against India. He says that he receives much love and respect in India than in any part of the world. Afridi says that India’s love for cricket is unparalleled while admits that both politics and media in India is so dirty and remembers well how Shiv Sena a political party dug up pitches in Mumbai while their media plays negative role by quoting things out of context. Afridi blames Indian Medias direct role in creating enmity and distancing the two countries away from each other. Afridi believes that the people of both the countries want peace and cricket is one of the bridges which connect the hearts of both the countries.

The book is the first autobiography of this legendary cricketer. The book Game Changer is actually a conversation with journalist Wajahat Saeed Khan. A young boy of 19, in his first international debut cricket match at Nairobi on October 4, 1996 scored a 37 ball century against the then world champions Sri Lanka and rose to fame and becomes the hero and star of millions of people across the globe

Shahid Khan Afridi shares some very personal experiences about how he was undermined and insulted by the then one of the legends in Pakistan cricket. In his book he discusses the corruption in the cricket board and happenings in Pakistan post 9/11 in which cricket was worst hit.

As this book is the conversation with Wajhat S Khan, Afridi admits that he was asked to be one which he was not. He says that my cricket talent was God given, if was polished the way it needed that time would have made his cricket career much better while appreciates Bob Woolmer, under whose able guidance his talent somehow get polished. Afridi says that Bob Woolmer always appreciates my natural game and encourages me to play aggressively so that tomorrow you have no regrets. The terrorist attack on the Sri Lankan team in Lahore in the year 2009 and its impact on Pakistan’s cricket.

He talks about the irregelities and politics within the team and Pakistan cricket board (PCB). Afridi admires and wants to implement same style of captaincy as Imran Khan (Now the PM of Pakistan) during Afridis tenure as captain of the team. Afridi called that style and way as Imran Khans School of thought which consists discipline minus politics. He greatly admires khans’ leadership qualities. Afridi likes Imran Khan for always speaking truth and his aggression (controlled aggression).

The book also talks about the relations between the two countries which worsened from the past few years. He says that first it was only Shiv Sena who opposed our tours to India but now it is the whole Indian government who is opposing us to play cricket on Indian fields. Afridi says he got much love from Indian masses as they are awesome but in the same line questions how these awesome people failed to choose for themselves the government which will never be good for their future. Afridi equally blamed Indian Media for negative propaganda that is responsible in instilling hatred into the hearts and minds of people.

Afridi says and strongly believes that cricketers are ambassadors of peace and cricket is one of the bridges to connect people and helps in restore peace. He gives credit to India’s IPL which changed the way of game which helps in nourishing and polishing the young talent.

Lala is very much concerned about the shrinking of talent in Pakistan, its consequences and measures and recommends how to fill the gaps for which he suggested Indian model of cricket system.

In the last chapter of his book Sahibzada Shahid Khan Afridi is very much concerned about Kashmiris. He asks both the countries to sit down on the table and settle this issue once and for all because this issue has endangered the lives of people of subcontinent. Afridi praises Khan for his soft attitude while criticizes Modi for his rhetoric and hard approach.

Former cricketer Shahid Afridi is a strong advocate of hard work and believes that it does not matter who you are or what your religion is but what makes one perfect is hard work which surely bring fruits and in cricket, hard work makes you a game changer.

The writer is a PhD research scholar as well as an independent researcher based in Srinagar. He can be reached at mubashirkitaba@gmail.com