Engineers of Jihad — despite the shortcomings, the book contains a wealth of information

* To understand the phenomenon, authors tackle four main questions about extremism; what are the socioeconomic conditions that explain why people join extremist groups? 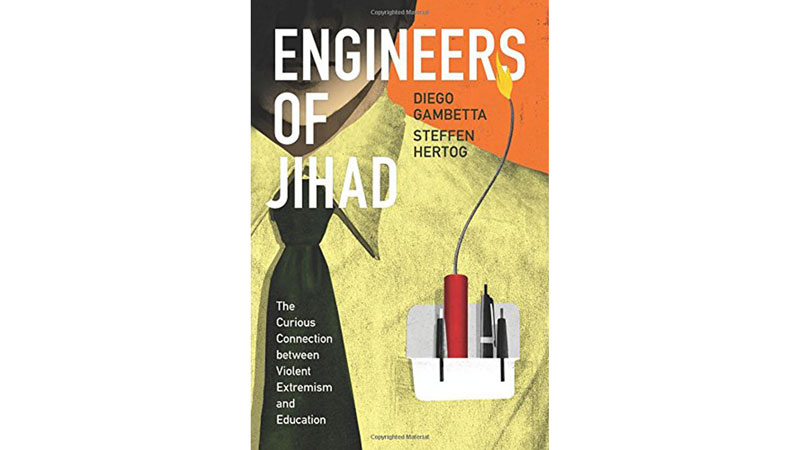 The extreme risk-taking behaviour of militants raises the question of what kinds of individuals pursue or join extremist groups.

The generally believed notion of poor and uneducated terrorists is a myth. Most of the world-famous terrorists have been quite well-educated people belonging to affluent socio-economic backgrounds. Surprisingly, huge shares of radicals come from an engineering background. As compared to other discipline graduates, engineers are more likely to pursue the route of violent extremism. Some of the world’s notorious terrorists from Osama bin Laden to Mohammed Atta belonged to the engineering discipline. Hence, the extremism-engineering nexus raises the question to understand the complex relationship between engineering and radicalisation.

To understand the phenomenon; authors tackle four main questions about extremism; what are the socioeconomic conditions that explain why people join extremist groups? (p.11) do some people more than others have a mind-set susceptible to the lure of extremism? (p.12) how do the individuals self-select to join particular groups or how groups select and recruit them? (p.14) and lastly does the ideology of a person matter in determining who joins which certain group? (p.14)

The book Engineers of Jihad is co-authored by Diego Gambetta and Steffen Hertog. Diego Gambetta is an Italian Professor of Social Theory at the European University Institute in Florence and has authored some other books too. Likewise, Steffen Hertog is an Associate Professor of Comparative Politics at the London School of Economics & Political Science. In the book, authors provide a brief conclusion at the end of every chapter making it easy for the readers to comprehend the subject matter.

Gambetta and Hertog highlight a list of 497 members of violent Islamist groups in the Muslim world since the 1970s to explain why educated individuals join extremist groups. The connection between radicalisation process and the educational background of extremists has been explored. Authors argue that higher the level of education, greater is the likelihood of joining a violent extremist group, graduates with more demanding professional degrees have a greater likelihood of joining (p.33). They conclude the argument by stating that engineers are over-represented among violent Islamist radicals, and the numbers of engineers in the extremist groups are fourteen times greater as compared to the graduates of other disciplines (p.32).

The over-representation of graduates particularly engineers is because of the unmet career expectations and frustrated ambitions. Authors point out the higher requirements to enter into an engineering course in the Islamic countries, as along with medicine, engineering is considered the most prestigious degree (p.42). Moreover, the data analysed depict the less representation of students with degrees in humanities, art, and education in the extremist groups. Under the framework of overrepresentation, they also compare the education of engineers and doctors and highlight that doctors are less overrepresented in the Muslim world sample, and unlike engineers, they prefer secular groups when they have a choice.

Authors discuss that graduates radicalise disproportionately when they are deprived of the opportunities. Engineers have been at the sharp end of relative deprivation that has driven university graduates in the Muslim world into militancy (p.70). To explain whether the ideology of extremists is parallel to the right or left-wing extremist groups, they argue that right-wing extremists show a preponderance of engineers than left-wing. Moreover, the authors state that there is a noticeable overlap between the ideological features of right-wing extremism and radical Islamism (social conservatism, anti-Semitism, traditionalism).

Different people are attracted to distinct kinds of extremism; engineers are vastly present among the right-wing groups while left-wing groups show the presence of humanities and social science graduates. Additionally, they discuss that certain degrees are a proxy for personality traits. Different types react differently to political oppression and frustration (p.127). Authors propose some specific personality traits for extremists including the need for cognitive closure, intolerance, in-group and out-group bias, proneness to disgust, simplism, preference for order and hierarchy. They argue that the traits they identify appear to account for much of the link between the political attitudes and educational disciplines (p.152). The survey results suggest that engineers are not necessarily traditional but they tend to dislike deviation from society’s norms and boundaries (p.154).

Though a well-organised and informative text, Engineers of Jihad has some shortcomings. A major drawback that is hard to overlook; the usage of controversial terms “Radical Islam”, “Islamist Militants”, “Right and Left Wing Extremists”. The connotation of religion to a specific mass of extremists is not suitable. All these terms have been criticised several times in the radicalisation studies, especially by Muslim scholars. Furthermore, the authors didn’t discuss the ideology of Radical Islam in detail while they often use this term throughout the book. Sample of the research excludes some larger extremist groups, plus the South Asian region is under-represented. Gambetta and Hertog interchangeably use the terms radicalisation, extremism, and terrorism in the book without highlighting the differences between them. To understand the subject matter, readers need to be clear about these terms.

Moreover, though authors provide a convincing argument of engineers’ radicalisation in the Middle East, the argument is not correspondingly applicable to other parts of the world. Also, If relative deprivation is the cause behind radicalisation in MENA (Middle East and North African) then why militants target the far enemy but not the near one. Likewise, militant graduates based in western countries do not conform to this phenomenon of relative deprivation. The book raises serious questions but the findings of the book are somewhat dubious.

Some parts of the book are contradictory; authors argue certain innate individual traits being the driver to study engineering or social sciences, while they also discuss the developing countries’ students’ tendency towards medical or engineering because of the peer pressure and the higher career prospects. Also, the authors mention ‘preference for order and hierarchy’ as one of the character traits of extremists. This is quite confusing and does not make any sense, as an individual possessing this trait would prefer the things to run smoothly without violence and chaos in the society. Attributing it as a characteristic of an extremist is incomprehensible. Thorough statistical underpinnings of the book are an impressive and good source of evidence for the practitioners. But for the non-experts, it is difficult to follow and comprehend excessive statistical data.

Despite the shortcomings, the book contains a wealth of information; comprising 400 biographies. It is an enlightening and thought-provoking addition to the literature on the phenomenon of radicalisation and education. The methodology and data of this book make it a unique scholarly contribution. To reiterate, Engineers of Jihad explores the conundrum of engineers’ radicalisation by taking into account both the societal and the individual psychological context. The main argument is that engineers have particular traits that make them susceptible to join militant groups. Nevertheless, it is an interesting read for sociologists, political scientists, research scholars, academics, and anyone curious to understand the radicalisation process.

The writer is a freelance and a postgraduate of Peace & Conflict Studies from National University of Sciences & Technology. She can be reached at aneeza.maham@yahoo.com