24 nabbed during crackdown on street crimes in Peshawar 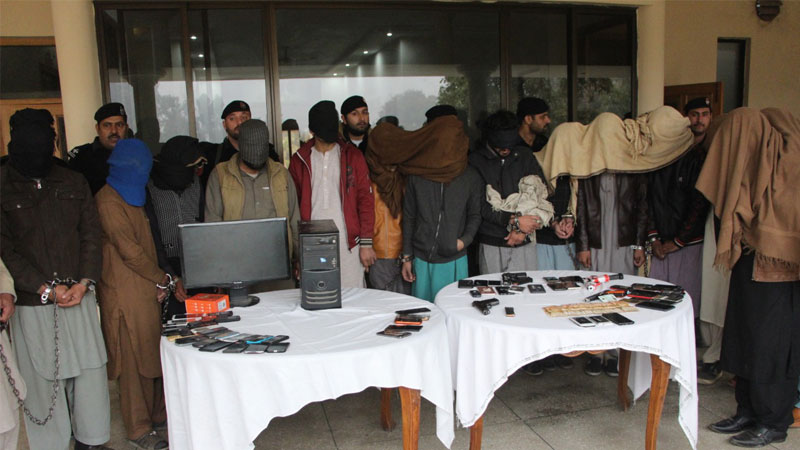 In a crackdown on street crime, Capital City Police have busted seven gangs and arrested 24 of their members, allegedly involved in snatching expensive phones at gunpoint and sending them onwards to Afghanistan for sales.

On the occasion, the arrested members of the gangs along with different items recovered in the actions were also presented before the media.

“Overall, there are more than 100 criminal cases registered against the arrestees at different police stations of the provincial metropolis,” he added.

He said that the arrests were made under a strategy as the police identified trouble points and later plainclothesmen were deputed in areas where there have been more complaints about street crime and snatchings at gunpoint.

“The gangs used to smuggle the mobiles phones to Afghanistan for onwards sales and use,” he said, adding that investigations in the issue were still underway. He said the police also exchanged firing with two of the gangs before arresting their members.

Speaking to Daily Times later on, SSP Operations Zahoor Babar Afridisaid that the entire crackdown against the seven gangs took three days. He added that they conducted the actions on complaints of snatchings at gunpoint from various areas of the provincial capital.

The officer also said that parents and other close relatives of certain arrestees would also be involved in investigations.

Meanwhile, police in the city also arrested a trafficker of crystal meth (ice drug) in Faqirabad locality. The accused, Wasif, confessed his crime of selling ice in Faqirabad locality, which houses a number of educational institutions, stated inspector JavedAkhtar, the station house officer of the area.

“Initially, Wasif has divulged another name, from whom he would get ice for onward sales, but we are investigating whether this is true or not, as sometimes an accused wrongly implicates his rivals wrongly in such cases,” he added. He said a pistol and 110 grams ice was also recovered from the accused in initial raid.