Mirza Ghalib, born on December 27, 1797, in Agra, was a well-known poet in the Persian and Urdu languages. Today, he remains one of the most popular and influential masters of the Urdu language; known simply as Ghalib. 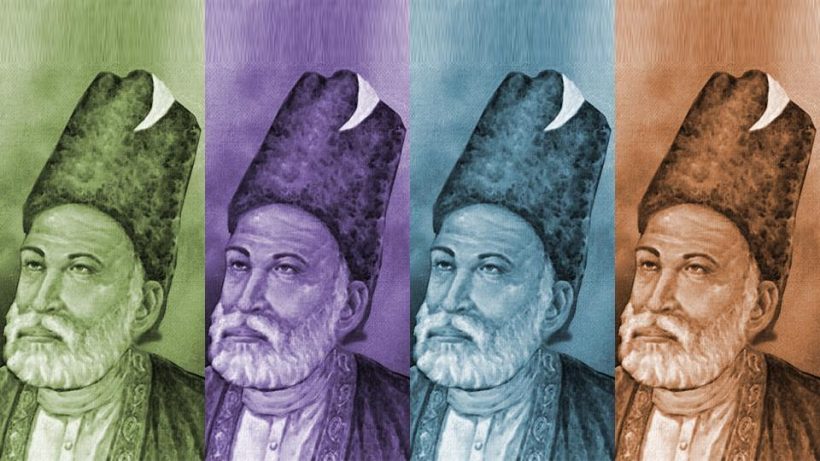 Ghalib’s poetry is characterised by a lingering sadness borne of a tumultuous and often tragic life — from being orphaned at an early age, to losing all of his seven children in their infancy, to the political upheaval that surrounded the fall of Mughal rule in India. He struggled financially, never holding a regular paying job but instead depending on patronage from royalty and more affluent friends. He once wrote there was only one pain greater than marriage, the pain of life itself.

Ghalib remains a symbol of pluralism and all universally agree that he was not just a poet of yore but a magician who weaved such magic with his words that they still haunt and cushion you simultaneously in trying times. Ghalib’s love for words always transformed into magic on paper.

During the days of Gadar when the British treated Muslims with suspicion and the city of Delhi was being emptied of Muslims. Ghalib did not leave the place in those days. Some Firangi took him in front of the colonel. On seeing his dress, the colonel asked if you were a Muslim! Ghalib said, half. He asked what half. The answer was that I drink alcohol but do not eat pig. Hearing this, the colonel could not stop laughing and left Ghalib. In fact, Ghalib witnessed conflict since childhood and did not recover from the struggle.

Infamous for being an alcoholic, a gambler and a social outcast, his contemporaries would always look down on him. In fact, Ghalib was twice arrested for gambling. Incidentally, the first and second editions of his ‘Deewan’ were published in the same years when he was arrested. This never deterred his confidence, and why should it, for Mirza had a league of his own. Many people then, and many of us even now denounce Mirza Ghalib as a drunken reprobate, a gambler and some would even go on to call him a womanizer and an atheist. But how many of us are aware of the other side of his personality?

On his 222nd birth anniversary, people took to social media paying tributes to the man of words sharing his poems and couplets.

Here are six famous Ghalib’s couplets that cut through the coldest of winters.

In this couplet, Ghalib expresses the age-old belief that the provenance of poetry is divine and mystical. The sound of the reed pen, substituted metonymically for poetry, is likened to the voice of an angel to emphasise the role of inspiration in a poet’s vocation.

un ke dekhe se jo aa jaatī hai muñh par raunaq
vo samajhte haiñ ki bīmār kā haal achchhā hai
(Looking at a someone special will indeed brighten up your face like no other, and that someone just thought you’ve been ill before)

If you ever want to flirt with great words, then Ghalib’s conveys romance.

It is beautiful how he spins magic that casts a longer impression on your heart than just your mind. Such is the power of Ghalib’s words, which have their own love affair with emotions.

dil hi to hai na sang-o-khisht dard se bhar na aaye kyon?
royenge ham hazaar baar, koi hamein sataaye kyon?
(It is only a heart and not some stone and bricks. Why will it not fill up with pain, I will cry a thousand times. Why does someone want to keep tormenting me)

With a sense of aggravated injury/anguish, Ghalib aggrieves that I am not made of stone and bricks that I don’t feel pain. Even my cup of pain brims. The second line echoes the first line provoked sense of injustice in saying that I am crying endlessly for I am being subjected to torment. The couplet as with Ghalib most works can be directed at the beloved or at the rigors of the existence where each passing day brings new misery.

Gifted naturally with the talent of letter writing, Mirza Ghalib and his poems have stood the test of time and are still relevant and highly popular today. Every couplet, every poem, and every song has a deeper meaning attached to it which needs contemplation and deep observation to be understood fully. Mirza Ghalib might not have achieved the fame and glory that he deserved during his lifetime but he has become immortal because of his poems and writings.

He passed away in Delhi on February 15, 1869. The house where he lived in Gali Qasim Jaan, Ballimaran, Chandni Chowk, in Old Delhi, known as the Ghalib ki Haveli, has now been turned into ‘Ghalib Memorial’ and houses a permanent Ghalib exhibition. His wife died on the same date as he died, a year later.

He didn’t die, for he is and will remain alive in the hearts of millions. Ghalib lost his hearing a few years before death but he gave us an invaluable treasure in the form of his poetry that we’ll hear, read and cherish forever.