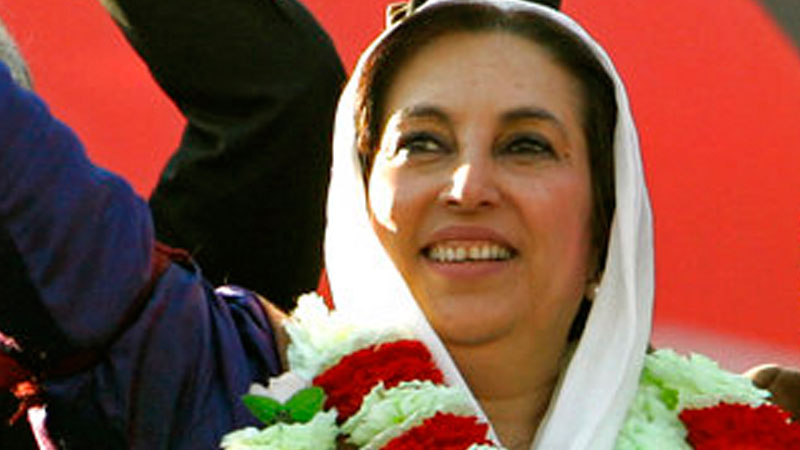 It is with a heavy heart that I pen these meager words of remembrance and tribute for a leader, woman and inspiration who was taken away by the attack of an assassin from all those who loved, respected, and followed her.It has been 12 years since we lost her, but her memory is still vivid in our hearts and minds.

Mohtarma Benazir Bhutto returned to Pakistan in October 2007, after eight years of exile. She came full of hope that she could be a catalyst for democratic and progressive change. After a tumultuous reception in Karachi, she survived a suicide-bomb attack that killed nearly two hundred of her compatriots. But she continued to forge ahead, with more courage and conviction than ever.

Bibi knew that time was running out for Pakistan and the future of her nation mattered more to her than fears for her life.

History will never forget 27th December 2007, the blood stained day that Mohtarma Benazir Bhutto was assassinated alongside her party workers after addressing a large public gathering in Liaqat Bagh, Rawalpindi.

At that rally Benazir Bhutto spoke prescient words that are as true today as that fateful day: “Today our motherland is calling us that I am in danger, see Balochistan, see northern areas, see our mosques; this land, our land, is asking you, asking me for help. That is why I have come to you. I have come to this Liaquat Bagh at this historic moment.”

But, almost as painful as Benazir Bhutto being taken away from her family, friends, political supporters, and supporters of her ideology, is the vast gap that is visible in Pakistan without her leadership. Lost to us at merely 54 years of age, her wisdom, sagacity and experience had just come into its prime.

Today, Pakistan’s economy is failing not merely faltering and Pakistan is ruled by its own version of the global trend of clueless populist celebrity leaders. A three-time elected Prime Minister was first unseated and then banned from office and jailed, amid a spurt of disputed judicial verdicts.

There is no visionary leadership anywhere on the horizon, reminding us constantly of Benazir Bhutto’s words and vision, which are not as well known to a new generation that has grown up without knowing her.

Benazir Bhutto, born into a famous family of politicians from Sindh, was a woman ahead of her time in Pakistan and throughout the Muslim world. Her own political career began during the brutal dictatorship of General Zia ul Haq, which embedded terrorism, religious extremism, and an alien form of social norms in Pakistan.

Bibi thus became the symbol of opposition to the violence, intolerance, and lack of democracy that Zia’s dictatorship represented. She was an extraordinary woman by all standards — the first female Prime Minister in a Muslim-majority country, the youngest elected leader in the Islamic world.

Soon after Zia executed her father, this young and fearless woman rose to the challenge and took charge of her father’s Pakistan People’s Party. It was a time when dissidents were jailed, and journalists were publicly lashed. Benazir Bhutto suffered imprisonment for several years but still managed to inspire people. For many, she represented the only glimmer of hope in those repressive days of fear.

Her struggle for democracy and civilian supremacy under constitutional rule continued throughout the 1990s when she was ousted from office after twice being elected prime minister. She was forced into exile and continued her struggle until her return and assassination.

I worked with Bibi Shaheed during her days in exile and saw her live by her convictions, the same convictions for which she was killed. She laid out her vision for Pakistan in her final book, fittingly titled Reconciliation. At a time when Pakistan is deeply divided and polarized, it is hard not to understand the value of consensus and finding the middle ground. Bibi also left the PPP a Manifesto that she had personally worked on and read and reread countless times.

It is hard to forget the day of her assassination and the long unending night after, the scenes at the hospital, that black night which carried Bibi’s coffin in the C-130 with her young children and closest friends and aides on board. We sat with her coffin at our feet in the darkness of the night.

The long and winding drive after through the sleeping villages of Sindh, our cars following close behind the ambulance which carried our beloved Bibi home to her beloved Naudero are seared into my memory.

Having seen Bibi in action, and having worked humbly alongside her, it is easy to understand why leaders cannot be artificially created or ‘selected.’ Pakistan’s progressive democrats need a hero, a leader who can spur us on, and whose memory can guide us. Shaheed Mohtarma Benazir Bhutto is the only figure in our recent history that fits that description.

The writer is a Global Fellow at the Woodrow Wilson Center for Scholars in Washington D.C. and a Former Member of Pakistan’s Parliament