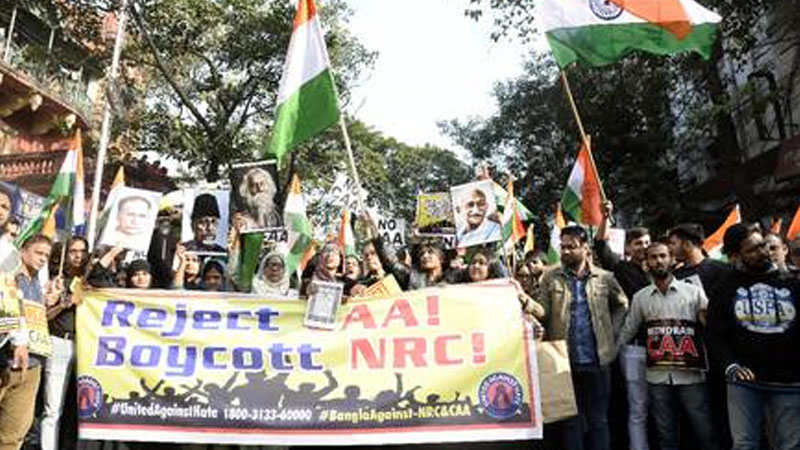 For the past seventy-two years, India has enjoyed a fake secular status. The operation and barbaric conduct used in Kashmir, Golden temple, Gujrat and many other states in India was vocal evidence of its false image. Still, the nation successfully convinced the world otherwise. It is a fact the India constitution guarantees equal rights to all citizens irrespective of their religion. As the Indian constitution offers protection to all the Indians practicing different religions, the Indian secular nationalism and how the state should navigate the religious diversity has always been a challenge for the country. From the very beginning, there have been two competing visions in India, including Hindu traditionalism and Hindu Nationalism. Hindu Nationalism considers the Indian identity is embodied in the Hindu religion. The school of thought believes that the Hindus are the sons of the soil and superior to the other religion. The other school of thought, Hindu traditionalists, was more influential at the beginning, and considered that cultural features are more important for an Indian identity. For them, the cultural attributes such as linguistic preeminence of Hindi over Urdu, etc. was more critical. With time the Hindu Nationalism strengthened its grounds, and became more rigid, fears, and aggressive.

The history of Hindutva and secularism in India is interesting. The Indian brand of secularism was tabled by Indian National Congress (or Congress Party). The party aimed to hold the country’s disparate communities together, and Nehru considered Indian composite culture as one of its biggest strengths. With time Hindu nationalists gradually and steadily populated Bharatiya Janata Party (BJP), who thought India a majoritarian nation-state and not a multicultural one. The contradicting views of the two parties have led to the present situation, which was particularly aggravated after the BJP’s electoral victory in 2014.

Here a very potent question arises, how in a secular country like India, a Hindu nationalist gained such strength and position? India has a traditional economy where religion has a critical significance. Hindu nationalists successfully created confusion around the concept of secularism, claiming that it aims to make religion insignificant. They presented themselves as the protectors of Hinduism religion. The idea was manipulated by the Indian Congress as well. The Congress Party undermined secularism to win the loyalty of many blocks, which gave them voice and strength. Not only that, Indian judiciary time and again has shown a distinct inclination towards the Hindu nationalists. One such example is the Indian Supreme Court verdict on the Ayodhya/Babri Masjid given on 9 November 2019.

Furthermore, the people of India have elected Hindu nationalists primarily BJP in 1996, 1998, 2014 and 2019. It is alarming as in a country like Pakistan, an Islamic state, an emerging democracy, which is struggling with its economy, neighbours, international affairs, poverty, population, education, etc. has never trusted any party which remotely propagate division or discrimination based on religion. How can a country which slogan itself as shining India and one of the biggest democracies in the world can rapidly opt for such a conservative school of thought based on hatred, discrimination, and division?

The people’s trust in the BJP government has increased their confidence. They have raised the bar every time after manipulating religion to gain political mileage. The 2002 Gujarat riot was one such tragic incident. PM Narendra Modi, who was the CM Gujarat at that time, was considered the master mind and responsible for the three days of inter-communal violence. Initially, the riot adversely affected BJP in the 2004 election, which was accepted by Atal Bihari Vajpayee. On the contrary, many scholars and researchers believe that it laid the foundation of contemporary BJP politics based on hatred, aggression, oppression, and division.

BJP slogan used in 2019 election “Namumkin ab mumkin hai’ says a lot about the Indian government intention. After gaining the power, the Government of India revoked the special status, or limited autonomy, granted under Article 370 of the Indian Constitution to Jammu and Kashmir region on 5 August 2019, the region has been the subject of dispute among India and Pakistan. The article also influenced the status of Ladakh, which is the disputed region between India, Pakistan and China. Kashmir is under lockdown for approximately 143 days without hardly any sane voices of concern coming from India. Similar reaction was witnessed with the Supreme Court verdict on the Ayodhya/Babri Masjid. The provoking BJP leader’s speeches against Muslims were gone unnoticed, in many cases, appreciated. Muslims having no representation in BJP was accepted unconditionally. Mob attacks on Muslims were reasoned with logic. Rape being used as a weapon in Kashmir was advocated on national TV in India. Religious fundamentalism was taken as a part of superior life, so why now the Indians are so alarmed, so concerned, and so shattered with the Narendra Modi’s new citizenship law.

According to The Citizenship Amendment Act, passed in December, all religious minorities such as Buddhist, Sikh, Parsi, Christian, Jain, and low caste Hindu are eligible for citizenship except Muslims. It is the first time India has incorporated religious criteria in its refugee or naturalization policy. The act has instigated country wide anti -CAA protests, which claimed the life of more than 28 people, and more 8000 arrests.

The role of congress is phenomenal, as well. Congress is suffering from a lack of leadership and vision. The party has shown no initiative to counter the continuous strengthening of Hindu nationalists’ ideology in the country. They waited for BJP to make a mistake, and mostly failed to actualize any such occurrence in there benefit. The party lack the initiative, reach, and followers, leaving a vacuum in the political scenario which strengthen the BJP, RSS, and Shiv Sinha trio.

India has been one of the major destinations of foreign investment, with FDI reaching $16.5 billion in the first quarter of 2019-20. It is one of the most preferred emerging markets, which offer customers, business opportunities, low cost of production, skilled labour, infrastructure, and ease of business. India’s confidence is concealed in this investment inflow. The countries like US, KSA, UAE, UK, and EU restrain from opening condemning its actions against Muslims in Kashmir and other parts of India. It’s important to understand that investment in many ways is a responsibility. With the current situation prevailing for long, India cannot deliver what it has promised to these countries. India is already facing trade challenges with the US and the EU. This will add stress to current situation and may lead to even more damaging consequences.

1947 immigration has its bloody legacy, with more than 200,000 to 2 million deaths and 14 million immigrants displaced. With the increasing insecurities and operations in Indian Muslim population, history may repeat itself, which will have an adverse effect on the whole region.

In the recent past, the BJP government has used its army and media as an election campaign tool. For its electoral gain, BJP has initiated a media provoked war between two nuclear nations, India and Pakistan. With the stress mounting in India, the border between India and Pakistan is exhibiting the reflection of that stress. It’s not far from the BJP government to open another front to distract the people’s attention, gain sympathy, and rejuvenate the lost unity. In the past, the Pakistan card has always proven handy and can do wonders in this situation as well.

As the India Supreme Court struggles in defining Hindu and juggles between its geographical and religious origin, the world is witnessing a country wide anti -CAA protests in India. It is a fact that now RSS and BJP have grounded themselves well in the country. They have followers and a vast majority in the Lok Sabha.. Now the whole country has fallen prey to Fascism, which seeks the supremacy of the group, in this case Hindus. The country is losing its image, history, future, and global position. India is now steadily progressing to the path of self-destruction. Alas India’s has raised their voices against Hindutva Fascism, but a bit too late.