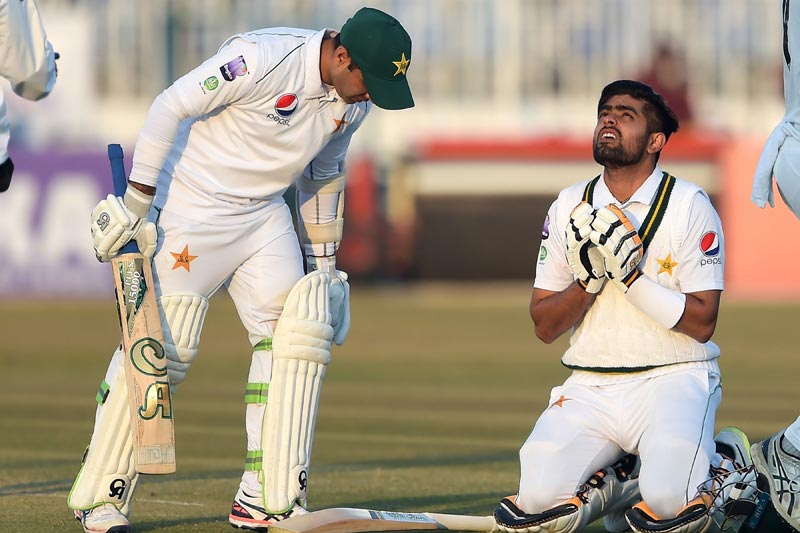 RAWALPINDI: Pakistan opener Abid Ali became the first batsman to score hundreds on both Test and one-day international debuts when he struck a ton against Sri Lanka in the first Test at Pindi Stadium here on Sunday. The weather-hit match ended in a tame draw yesterday. Rain and bad light did not allow full play on any of the previous four days since Sri Lanka won the toss and chose to bat but Pakistan’s supporters still packed the stadium on the final day amid bright sunshine. Abid finished with 109 not out and Babar Azam was unbeaten on 102 as Pakistan scored 252-2 in reply to Sri Lanka’s first innings total of 308-6 declared. Azam also added to his burgeoning reputation as one of world’s top upcoming batsmen, completing his third Test hundred after knocks of 104 and 97 in his last two Tests in Australia.

On 95, the 32-year-old Abid hit paceman Vishwa Fernando for a boundary and then drove him through cover for two to complete his hundred, raising his hands in jubilation before bowing down on the ground. His feat came on the fifth and final day follows his 112 against Australia in Dubai on his one-day international debut in March this year. Abid one of 15 batsmen to score a hundred on a one-day international debut since the inception of limited over cricket in January 1971, but none of the others also had a Test debut century. Test cricket started in 1876. Abid is the 11th Pakistani batsmen to score a century on Test debut. Abid’s feat spiced up the historic Test, the first in Pakistan since the 2009 attacks on the Sri Lankan team bus left international cricket suspended in the country. Bad weather hit the Test on all previous four days and only 91.5 overs were played as rain, bad light and overcast conditions affected the game. The fourth day was abandoned without a ball being bowled. But there was bright sunshine on Sunday as Sri Lanka batted for 20 minutes to declare their first innings at 308-6 with middle-order batsman Dhananjaya de Silva scoring an unbeaten 102. Pakistan lost opener Shan Masood for nought when he drove a full toss from pacer Kasun Rajitha straight into the hands of Dinesh Chandimal at cover, while skipper Azhar Ali scored a shaky 36 before he was caught off paceman Lahiru Kumara.

Dhananjaya finally completed his sixth Test century in the morning. The 28-year-old right-hander drove paceman Mohammad Abbas for his 15th boundary to bring up the hundred in his 28th Test. De Silva remained unbeaten on 102 after 241 minutes of batting, having come in with the score on 127-4 on Thursday. Dilruwan Perera remained unbeaten on 16. The pick of the Pakistan bowlers were 16-year-old pace bowler Naseem Shah, who took 2-92, and Shaheen Shah Afridi with 2-58. The second Test is in Karachi from December 19. Pakistan picked up 20 points for the draw –– their first in the World Test Championship, having lost 2-0 in Australia. Sri Lanka also picked up 20 points to take their total to 80. The recently-launched WTC sees the top nine test nations face-off over a two-year period, scoring points based on their success and culminating in a final at Lord’s in June 2021.