Brexit: an accident waiting to happen

The European Union (EU) is a group of 28 countries, which envisages a common policy on economics, human rights, foreign policy and security. Before the referendum in 2016, there was an ongoing debate in Britain whether to stay in the EU or not. It was not until the announcement of Prime Minister David Cameron that finally Britain took the decision to conduct a referendum whether to stay in the EU or leave. However, Cameron expressed his reservations that in case Britain had to leave the EU there would be severe repercussions, and in case of exit from the EU, Britain would become economically weaker and unstable. 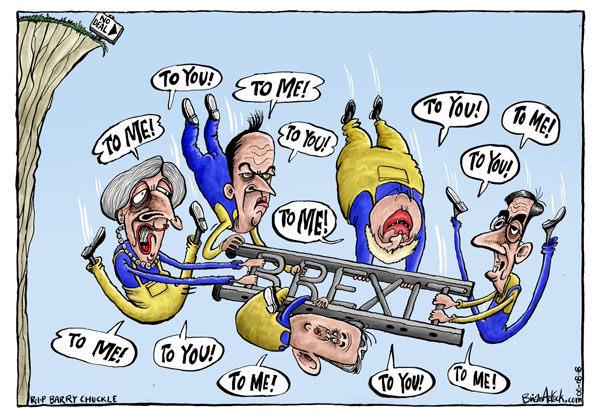 Contrary to this point of view, there is a huge number of people who support the idea of leaving the EU; they fear that by remaining in the EU Britain has already lost its parliamentary sovereignty to Brussels and the European Court of Justice. There is another apprehension that job prospects for British nationals have diminished over the years due to the increasing number of immigrants in the country, which has resulted in squeezing the job market for the British nationals. The EU espouses the idea of free flow of goods and services and promotes liberalisation policies.

In Britain, that is primarily seen as a threat, giving rise to ‘Euroscepticism’, as people are more worried about their jobs and the cultural backlash that has taken its toll with the increased number of immigrants from European countries such as Poland and Greece. As a consequence, Euroscepticism has had a profound impact on Britain’s society. Euroscepticism is a political doctrine that advocates political disengagement from the EU.

After the Second World War, Britain was cautious; it stood back and only watched as Europe drew closer in the 1950s with the formation of the European Steel and Coal community. Subsequently, in the 1960s,the European Economic Community (EEC) was formed, and France opposed Britain’s entry. It was not until 1973 when Britain finally joined the EEC. The Conservative Party was suspicious of the move as it was of the view that British parliamentary sovereignty would be undermined and subdued by policymakers in Brussels. Two years later in 1975,Britain conducted a referendum, and the majority voted to remain in the EEC.

In the 1980s, manufacturing collapsed in Britain as Margaret Thatcher’s government brought radical changes in the economy. The Thatcherite politics led Britain to proceed towards privatisation, deregulation of banking and financial institutions and curtailment of labour unions. Consequently, the manufacturing sector deteriorated and many people lost their jobs. Income disparities increased, and the gap between the rich and the poor widened. People increasingly became dependent on Britain’s welfare system.

The refugee influx was a key issue that impacted Britain not only in terms of economy it also had a social and a cultural impact. All that set the stage for Brexit

In 2008, Britain was again hit by the global financial crisis, and the economy plummeted into a recession. There were fewer jobs, and the government brought austerity measures and cuts in social benefits. The most affected was the working class for whom life became harder. That whole scenario mainly contributed to the factor of the leave-vote.

In 2015, the situation in the Middle East worsened due to the civil war in Syria, and the crisis situation that ensued in other Middle Eastern countries after the Arab Spring. Refugees started migrating to European countries; many of them looked towards countries like Italy, Germany and Britain. The refugee influx was a key issue that impacted Britain not only in terms of economy it also had a social and a cultural impact. All that set the stage for Brexit.

The political event that triggered the referendum to take place in 2016 was the election of 2013 in Britain. David Cameron of the Conservative Party announced in his electoral campaign that in case he gets elected he would organise a referendum whether to leave or remain in the EU. He did it to get a strategic advantage and political mileage over the Eurosceptic UK’s Independence Party.

Since then, Britain has been contentiously bargaining over the nation’s withdrawal from the EU in the process known as Brexit. The government has been in crisis, unable to agree on an approach regarding withdrawal from the EU. The struggle has already cost one prime minister, Theresa May, her job. She announced in late May that she would resign after failing to come up with a plan that satisfied her party, her coalition partners and officials in Brussels, the seat of the EU.

Many lawmakers were outraged over Boris Johnson’s insistence that if need be, he would pull Britain from the EU even without a formal agreement. When Johnson attempted to manipulate the situation by suspending the parliament weeks before the deadline for withdrawal, Britain’s Supreme Court ruled that he had acted unlawfully, and that parliament must be allowed to resume as normal.

In October 2019, the prime minister and EU negotiators announced that they had struck a draft deal; it needs to though clear the hurdle of final approval from the British parliament and European leaders. The deadline to depart the bloc has been just extended by the EU to January 31. It seems that Brexit was an accident waiting to happen.

The writer is a constitutional lawyer, human rights activist and a teacher