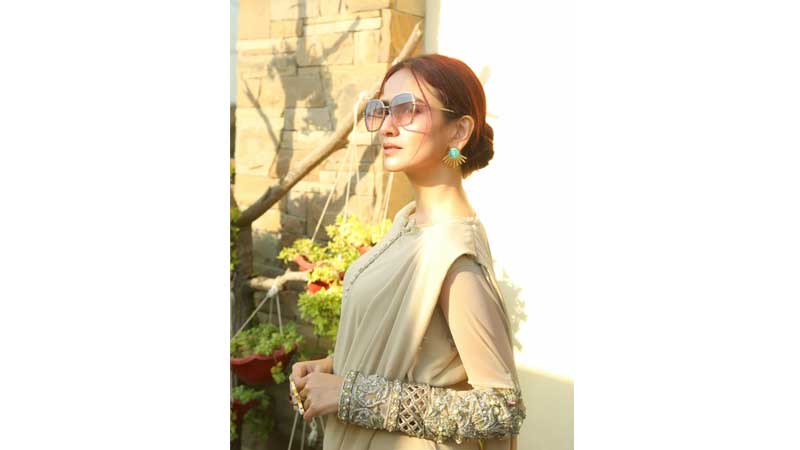 Zarnish Khan is a name many know to be a powerhouse on its own. She is not just a beautiful face rather Khan is also a celebrated versatile actress, a strong personality and an advocate of female empowerment.

Drama serial ‘Susraal Mera’ catapulted actress Zarnish Khan to fame followed by ‘Sehra Main Safar’ and ‘Laaj’. The actress is currently playing the role of Donia for the mega drama serial ‘Ishq Zahenaseeb; where she’s performing alongside names like Sonya Hussyn, Sami Khan and Zahid Ahmed and yet has managed to win the audience with her acting prowess. We recently met up with Khan over a cup of coffee to talk about Ishq Zahenaseeb.

Would you consider working on a sequel to ‘Ishq Zah-e-Naseeb’?

Why not? If I get the opportunity to play Donia again, I will accept it with my eyes closed. This character is very dear to me. It has all the shades that people can relate to and the transformation of Donia gives a very strong message that the power of trust and love can overcome any negativity as long as you find the right people in your life.

What do you think the future of Kashif and Donia will look like, taking into account Donia’s past experiences and her trust issues?

Well, if I talk about the story it will spoil the suspense of the drama. I can only say that there is more to their relationship than one can predict at this point in time.

‘If I get the opportunity to play Donia again, I will accept it with my eyes closed. This character is very dear to me. It has all the shades that people can relate to and the transformation of Donia gives a very strong message that the power of trust and love can overcome any negativity as long as you find the right people in your life’

Portraying a challenging character like Donia is an advantage as well as a disadvantage. Do you agree?

I won’t weigh Donia’s character in terms of advantages and disadvantages. Rather, it’s a story of a complicated woman who has seen a lot in a very early stage of her life. Yes, it had a negative feel to it but that was an important aspect that had to be shown to make the character relatable. The audience loved the transition from negative to positive and the eventuality of her accepting life. Initially, I was a little doubtful that fans might not perceive Donia in a positive light. However, to my surprise, the feedback has been humbling and overwhelming and I’m glad I accepted the role.

Are you and Sami Khan planning to do any more projects together in the future?

Only time can tell. He is an amazing actor and a dear friend. If an opportunity presents itself, I will consider it.

Why do you think Pakistani serials are a great hit worldwide?

Our dramas are very close to real-life instances and our production quality has also excelled. The whole industry is putting a lot of efforts into showcasing the true colours of Pakistan internationally, which was never the case before. In the past, we had an identity crisis as an industry, but I am glad it is changing and now collectively we have learned from our mistake that following Indian content is not the right way forward.

Any favourite dialogue from ‘Ishq Zah-e-Naseeb’ that you delivered as Donia?

Share a funny incident that happened on the sets of ‘Ishq Zah-e-Naseeb’?

Oh, there are tonnes! The really fun one was when Sami and I had an Instagram prank war. He would post something on his story and then I would respond to it by doing the same. It went on for weeks before we called it off.

You come across as a very happy-go-lucky, positive and a good role model for our young girls. Can we hope that you will filter out some regressive portrayals of women in your serials/films?

I have tried to do that with the character of Donia. She is a strong and independent woman and even at her worst, she stood her ground, fighting the world around her. Every woman has the right to live her life on her own accord and as a society, we need to accept that. The recent characters that I have played are very strong, such as the character of Bisma in “Jo Tu Chahay.” She was also a very strong headed person and one who would not back down at any cost. Other than that, my new drama “Mohabbat Na Keriyo” showcases me as an independent woman living aboard and supporting herself without depending on a man. My recent choices of character are very different from what I have done in the past. I wanted to try strong characters that make a statement rather than play the damsel in distress.

‘Ishq Zah-e-Naseeb’ is just one of the many projects Zarnish Khan has immaculately presented. We can’t wait to see what character Khan chooses to take up next!