The unfolding of Kashmir tragedy

The partition of India and Pakistan brought in its wake a human tragedy of colossus magnitude, leading to murder, arson and rape. Thousands of Hindus and Muslims were killed leading to one of the largest migrations ever seen in history.

The outgoing British further complicated the already fragile situation by not deciding the fate of several princely states. Those states had the option of joining India or Pakistan or remain independent. One such princely state of Jammu and Kashmir (J&K) decided not to join India or Pakistan and chose to remain independent. The rationale behind the decision of the Hindu ruler of the state was that the minorities comprising of Hindus, Christians and Muslims would be insecure in Pakistan, and he was also worried how the majority Muslims would be treated by India. Given the situation, Maharaja Hari Singh took a wise and bold decision.

However, immediately after independence, an uprising against the Maharaja broke out in the Poonch jagir, an area bordering the Rawalpindi district of West Punjab and the Hazara district of the North-West Frontier (now part of Pakistan-administered Kashmir). The leader of the rebellion, Sardar Muhammad Ibrahim Khan, escaped to Lahore and approached Pakistan for help. The then prime minister Liaquat Ali Khan took advantage of the rebellion and decided to take the support of Pashtun tribal and other irregular forces to invade Kashmir. Those forces succeeded in capturing the western part of Poonch, Muzzafarabad and Gilgit-Baltistan and were at a striking distance of Srinagar.

Maharaja Hari Singh panicked and sought help from India to stop the invaders from entering Srinagar. India offered to help the king under the condition of his signing an Instrument of Accession with India. In terms of the agreement, the Indian army was sent to repulse the invaders. It also wanted to liberate other parts like Poonch and Gilgit-Baltistan from the ‘illegal’ occupation but were prevented by Indian Prime Minister Jawaharlal Nehru as he felt such an act would have received opprobrium of the United Nations.

Salahudeen was heading for a landslide victory, but at the instance of Farooq Abdullah, the incumbent chief minister, the election results were manipulated

Ever since the Kashmir valley and Jammu became part of India, the vast majority of the people were not happy with the Maharaja Hari Sing’s decision, as they felt their freedom would be curtailed by joining either India or Pakistan. Although there was an uneasy calm prevailing in the Kashmir valley, both Muslims and Hindus were living in peace and harmony, as Kashmir was always a cradle of Sufism. 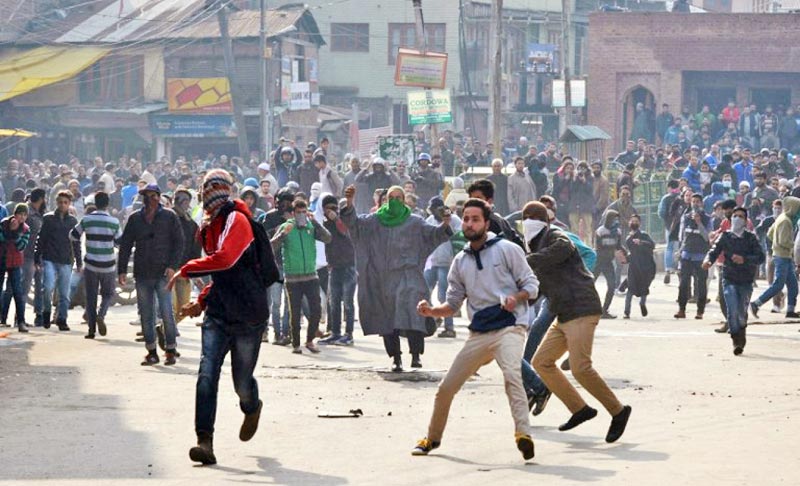 The political situation took a worse turn in 1987 when the people accused the Indian government of rigging the local elections in an attempt to prop up their proxy as the chief minister of J&K. One of the separatist leaders, Sayeed Salahudeen, approached the Indian government that he was who was willing to give up the demand for independence if he was allowed to participate in the J&K state elections. Salahudeen was heading for a landslide victory, but at the instance of Farooq Abdullah, the incumbent chief minister, the election results were manipulated, and Sayeed was deprived of what would have been a legitimate victory. Sayeed escaped to Pakistan in disgust, where he found Hijbul Mujahedeen to fight for the self-determination of Kashmiris. The situation from then on has gone from bad to worse as Sayeed has been instrumental in sending armed militants to India.

In fact, Sayeed was responsible for the birth of the Kashmiri insurgency, which during the 1990s escalated into the most important internal security issue for India. Moreover, Sufism was giving way to Wahabbism in the state where the Kashmiris wanted to free themselves from the Indian dominion.

In 1986, the situation deteriorated, when Indian Prime Minister Rajiv Gandhi’s government decided to unlock the gates of Babri Masjid at Ayodhya to allow the Hindus to worship. For millions of Hindus, Ayodhya is the birthplace of their deity Lord Rama, revered by millions of Hindus. The Hindus had never forgiven the Mughal King Babur for destroying the temple and building a mosque in its place.

That unlocking of the Masjid led to fear and resentment among the Muslims in the valley. The resentment against India was slowly building up.

In late 1989, the Jammu and Kashmir Liberation Front, a separatist organisation owing allegiance to Pakistan, took advantage of the growing resentment among the local Muslims, attacked the Hindus, resulting in over 600,000 Kashmiri pundits fleeing the valley, one of the largest exoduses in the world history.

The valley has never been the same again. It has been a victim for decades of jihadist terrorism (both home-grown and armed militants allegedly sent to the valley by Pakistan). The dastardly attack on the soldiers in Pulwama in the state of J&K, allegedly by militants sent from across the border, led to a reprisal strike when Indian jets flew over Balakot (in Pakistan) and allegedly demolished the training camp of terrorists. Pakistan downgraded diplomatic ties with India by sending back India’s high commissioner.

However, when US President Donald Trump offered to mediate between India and Pakistan to find a resolution over Kashmir, India did not take kindly to the offer, maintaining that Jammu and Kashmir was an integral part of India. As India was receiving bad press from the western media, it took a decisive step by abrogating Article 370, which had given special rights to the people of Jammu and Kashmir in terms of autonomy and its ability to form laws for the residents. This article along with Article 35A that defined that Jammu and Kashmir state’s residents live under a separate set of laws, including those related to citizenship, ownership of property, and fundamental rights to those permanent residents of the state. As a result of this provision, Indian citizens from other states were debarred from purchasing land or property in the state.

The Modi led BJP government decided to split J&K into two Union territories of Jammu and Kashmir and Ladakh (a region with Buddhist majority) to put to rest the controversy over the sovereignty of Jammu and Kashmir. To prevent any uprising against the move, the government of India imposed a clampdown on all forms of communication (internet, print and electronic communication) in the valley. This act of India was widely criticised by the international media as they felt that it was unbecoming of the largest democracy of the world.

Today, an uneasy calm prevails in the valley. The exact reaction of the people on the abrogation of Article 370 would be known only when complete normalcy is restored in the valley. The valley is now seeing militants targeting civilians to instil fear amongst ordinary people. Parents are refusing to send their children to school for fear of terrorist attacks. Militants have already burnt down a few schools. People are now caught in a vortex of violence unleashed by militants and the counter-attacks by the security forces.

India needs to realise that normalcy can’t be restored by brute power alone. It is in this context that it has to take several steps to restore normalcy in the valley. The Indian government should remove all forms of clampdown and restrictions imposed in the valley. It should immediately focus on various developmental projects, which can create jobs for the youth so that they do not become easy fodder to radical elements. It should announce immediate free and fair elections so that the people can elect their leaders. It should release all the political leaders wrongly confined in jail. After the election, it should restore the statehood of Jammu and Kashmir.

Sadly, people in the Pakistani administered Kashmir are also fighting for their rights. The people of Kashmir, on both sides of the border, are up in arms against the respective governments, as both the governments have failed miserably in providing proper governance to win the trust of the people.

In the fight between India and Pakistan, it is the ordinary citizens of Kashmir who are paying a heavy price. There is no easy solution to win back the confidence of the people. However, if India and Pakistan take positive steps in creating an atmosphere that allows Kashmiris to visit each other without a visa, free trade at the border, both countries accepting the current delineation of borders, and last but not the least, allowing the people to elect their leaders without any outside interference through a free and fair election, probably they will succeed in creating goodwill among the people on both sides of the border.

It is a tall task, looking into the prevailing unhealthy and bitter relations between the two countries, but both countries should set aside their differences and look for solutions in the larger interests of Kashmiris so that we can put an end to a human tragedy that has gone unabated for the last over 70 years.