Are we in Pakistan?

* Our Qatar flight on October 23 had landed almost an hour earlier in Lahore, just past midnight 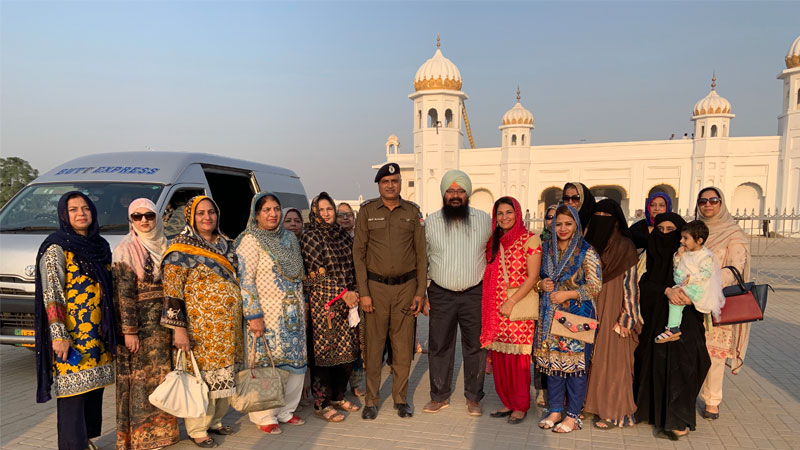 In an October 5, 2019 column, I wrote about the overwhelming support and love my wife Harpreet Minhas and I received from Delaware’s Pakistani community in America on learning that we were travelling to Pakistan for the first time.

Guru Nanak’s 550th birth anniversary had inspired us to make the trip-one we had previously thought impossible. As it turned out, the eight days I spent in the country so feared by many turned out to be eight of my best.

Our Qatar flight on October 23 had landed almost an hour earlier in Lahore, just past midnight. Immigration and customs were a breeze-a pleasant surprise because getting our Pakistan visas in Washington D.C. had taken us a month.

The airport’s infrastructure and overall condition reminded me of India’s Nagpur airport, which I had visited before coming to America in 1999.

Outside, our trip guide and facilitator, Irfan Raza-our Delaware friend Rubina Malik’s relative and our ride to the Pearl Continental Hotel-had not yet arrived.

Walking around, I started looking and observing and taking pictures of my first glimpses of the Lahore I had read and heard so much about. A Sikh anywhere in the world has a special bond with Lahore for historical, religious, cultural and language reasons.

“Sat…Sri…Akal,” I mumbled, trying hard to place this familiar face.

Is he one of my wife’s many cousins who live in the Jalandhar belt or a sibling of one of my hometown Patiala friends? His smile and sweet and friendly demeanor provided no clues.

“Irfan, Ji.”His face bloomed even more as he stretched out his right hand. His beautiful wife, Bushra, stood by his side clasping her hands like I do many times when in a gurdwara.

Before they left after checking us in the hotel, we discussed how to overcome various uncertainties we may face arising from Maulana Fazlur Rehman’s call for nationwide protests. We decided to mitigate possible risks by visiting destinations outside Lahore first.

As planned, after we had bathed, changed, slept a few hours and eaten, Irfan and Bushra picked us up to go to Gurdwara Janam Asthan in Nankana Sahib. Irfan was driving.

We headed west and soon reached a bridge over a dry riverbed.

After about three hours we reached the gurdwara on the site where 550 years earlier Guru Nanak Dev was born. I entered the compound and continued to walk towards the gurdwara. A man in his sixties, coming from the opposite side, greeted me.

“I am Abdul Rasheed. My elders revered Baba Nanak. Baba Fareed is our saint; he and Nanak are the same, they taught us. Sardarji, you are fortunate that he has summoned you to his darbar.”

Abdul’s wear was simple and his manner rustic, but what he said was divine.

“This is my first time. Do you live here in Nankana Sahib?” I asked.

“No, Samundari, near Lyallpur. This is my first time as well, though I have been intending to visit for decades.”

The airport’s infrastructure and overall condition reminded me of India’s Nagpur airport, which I had visited before coming to America in 1999

With that, he walked away quietly humming something.

When I came out after paying my obeisance, a group of seven non-Sikh men asked me for a picture. Another family requested the same when we were collecting our shoes.

Such requests for pictures by men and women, boys and girls, individuals and families, young and old, on foot or a bike or in a car grew in the days ahead. Why was I such a celebrity? Honestly, I don’t know.

For instance, the next day, before we reached Kartarpur Sahib, a camel owner in Narowal asked me for a picture. On arrival in the compound of the Gurdwara Darbar Sahib, we were mobbed by the national and international media present there rafter covering the signing of the agreement between India and Pakistan to operationalise Kartarpur Corridor. In Faisalabad, on Friday, visiting Lyallpur Khalsa College (now Municipal Degree College) was one of our top priorities. When we reached its gate, the college appeared to be closed and the helpless security guard pointed us towards the principal about to leave in his car.

When Aslam from our local host group approached him, I will never forget his reply: “It is their college, their property. They built it. Who am I to give them permission?”

Other than absent bars and wine shops and Urdu street signs, it is difficult to tell the two Punjabs apart. East Punjab doesn’t have a large and developed city like Lahore, soaked in grand history. Its DHA developments may have no match in northern India, while the Packages Mall could be a shopping destination anywhere on the globe.

I have lived in England as a student and visited many European, North, South and Central American countries for business and leisure. Australia and Asia as well. I have seen more expansive physical beauty and natural diversity, awe-inspiring infrastructure and impeccable systems.

However, never before have I seen such hearty hospitality or experienced an abundance of love that so contrasted with a country’s image abroad. No wonder that Harpreet and I frequently asked each other, “Are we in Pakistan?”

The writer is an entrepreneur, columnist, activist and a cultural events organiser. He can be reached at charanjeetsinghminhas@gmail.com