Exploring the music market of the red light area 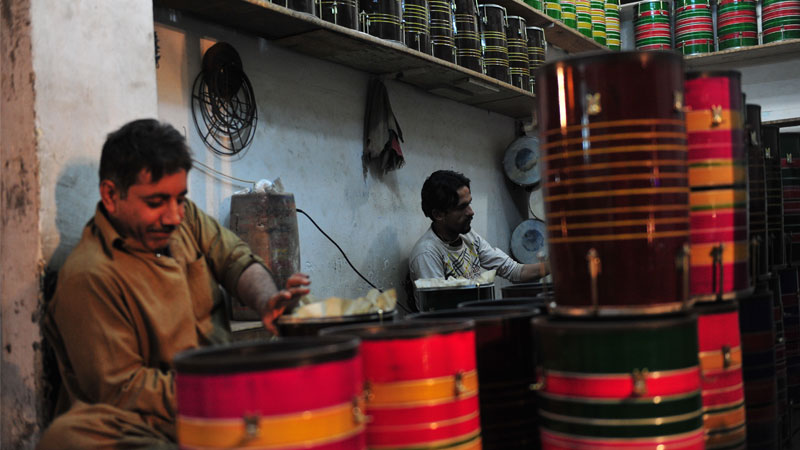 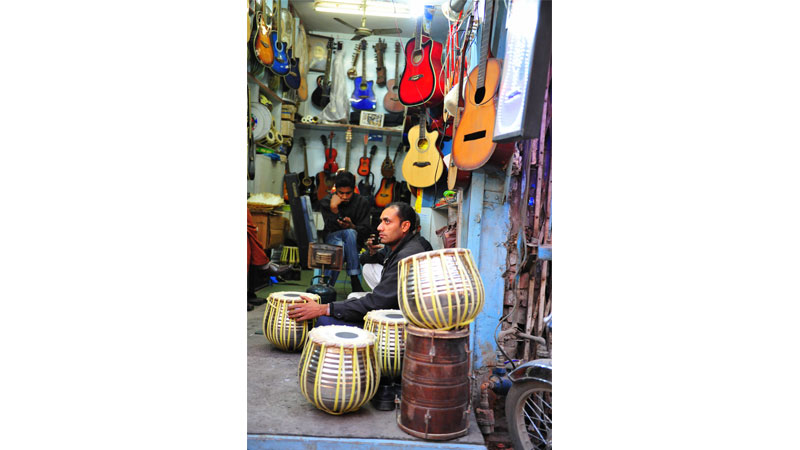 There are numerous hidden treasures in this gate other than the red light area but now it is only known for that. I think that the development of the Fort Road Food Street has given a new life to this place and once again it is becoming a family point. Despite this the families are not easy to move inside the streets of Taxali because most of the areas still house the dancing girls and pimps are seen roaming around the streets looking for customers.

Today, let me take you to a market inside Taxali and you will be amazed to know that it was at one time the largest musical instrument market of Pakistan. This market is still known as the Lahnga Mandi. As you walk through the Chowk Heera Mandi and cross Peer Naugaza’s Shrine, on your left you will see a huge market. There, you will start coming across interesting music shops. The amazing sight is that the music instrument makers are busy in making different instruments like Tabla, Dholak, Daf, Sitar etc and along with that they are candidly playing those instruments. It is a melodious street I must say.

Let me tell you that this is the oldest market of music instruments here in Pakistan. In almost hundred shops you will find all types of traditional and modern musical instruments. Once there were rows of musicians, music bands and music players, but most of the shops went out of business when the red light area was banned. The dancing girls living in this area left their ages old kothas and settled in other posh areas of Lahore. The music makers also left the place but as a consequent the shops and businesses of these people suffered. The art of music instrument making also started to vanish away with the passage of time.

Today, let me take you to a market inside Taxali and you will be amazed to know that it was at one time the largest musical instrument market of Pakistan. This market is still known as the Lahnga Mandi. As you walk through the Chowk Heera Mandi and cross Peer Naugaza’s Shrine, on your left you will see a huge market

This area had also been known as Shahi Mohallah (Royal Neighborhood) and the location of this Market makes sense in being there. This area no doubt was once the hub of music, arts and culture and the remains we can still see here inside the Lahnga Mandi.

I had started visiting this place way back in 1998 and if I compare the area with past it is completely different now. You will see very few traditional musical instruments there now because the modern musical instruments have replaced the traditional ones adding to the downfall of this market. There is no help for the shop owners with which they can uplift their economic conditions. Shops of sitar, tabla, dholak, dhol, daf, harmonium, ek tara, toomba, flute, saxophone and many others were seen here almost twenty years ago. Gradually the local musicians and composers moved out and these items got replaced by piano and guitars. This is sad but now almost all shops are selling guitars and other modern music instruments. The only sitar maker from here also shifted out as his work had lost value and new generation did not care about this instrument in the presence of electronic sound effects.

Almost all the shopkeepers are upset with the downfall of the business. Many people in Lahnga Mandi said that music was the only source of income for them which is no more alive there. Many ustads of music do not encourage the new generation to join the field of music now and the younger lot is now learning other skills like electrician, tailor etc.

With the passage of time the population also increased and so did the traffic. Most of the shopkeepers also say that people moved out of this place because of congestion and traffic. Yes, this is right because accessing this place is an uphill task for everyone.

While visiting this place you will see people busy in making instruments and checking them, but now you will also see some other shops there than the music shops and this is alarming.

This place is a mix of art and culture which needs to be projected among people. While talking to the shopkeepers I got to know that they were not bringing in their new generation into the same field as there was no source of earning for them. This made me think that the true culture and spirit of the area would vanish if there is no production of music makers and what will we see there in future?

I think the government needs to invest in this place and make it alive. I am not supporting the red light area, I am supporting the poor vendors and shopkeepers and the dying instruments. Recently the Walled City of Lahore has launched Taxali Gate guided tours which became very popular. I hope if they carry on with the same spirit people will be friendly with the area and it will help the locals in generating income.

The writer can be reached at taniashahab2016@gmail.com. She Tweet at @TaniaQureshi