The new enigma of cyber war

In the current era of globalisation, the world is dependent on the internet or cyber networks. Due to the emergence of cyber space the world has become borderless. But the misuse of that technology is leading toward a new dangerous zone, and that zone is cyber wars. There is a slow shift of battlefield from land, air and sea towards cyberspace. Cyberspace is an electronic system that allows computer users around the world to communicate with each other or to access information for any purpose. 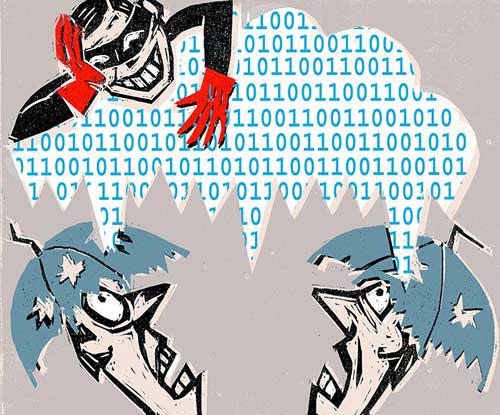 The questions are why we are suffering and why we are under the influence of major powers. One of the major reasons is that we are under the addiction of a cyber system that has been produced and is observed by America. US National Security Agency (NSA) is spying on Pakistan through the internet and an online communication system such as Facebook. NSA checks 13.5 billion emails, phone and other communication. In this respect, Pakistan, after Iran, is the second most ‘observed’ country by the US. This is an alarming situation for the national security of Pakistan.

Due to the emergence of cyber space the world has become borderless. But the misuse of that technology is leading toward a new dangerous zone, and that zone is cyber wars

When we use any tool of communication, it means that we are sharing our views across borders, and we are quite satisfied with that. But if we think deeply about the effects of the situation, we are preparing grounds for the west to understand our mindsets. The more you understand the mindset of the opposition the more you can plan a better strategy to have control over them. Therefore, in my perception, all communication tools are Trojan horse programmes. The Trojan horse programme is used to divert attention from the right track. Here I would like to define the term the Trojan horse to explain the situation more clearly.

The term Trojan horse programme comes from the Trojan War in the 12th century BC, between Greece and the city of Troy. When the prince of Troy abducted the queen of Sparta with the wish to make her his wife, Greeks besieged the city of Troy for ten years but could not get success because Troy was very well fortified. At last, the Greek army pretended to retreat, accepting their defeat, and left a huge wooden horse as a present for Troy. The people of troy pulled that horse into their city as a present from the people of Greece. They were unaware that the huge wooden horse was filled with the best Greek soldiers. At nighttime, Greek soldiers got out of the horse, and with the rest of their army, killed the entire army of Troy.

The same is the case with the users of cyberspace, more specifically, social sites that help to distract attention from the actual situation. Through Facebook we share our views regarding any international issue, and these views can be seen by everyone. To understand these views one can easily make any type of strategy or policy against anyone. Some information can do a great deal of harm. The interest that we show in any advertisement or the topics that we discus on social media are also noticed. All these things show the mindset of a nation, and that can be moulded through social media very easily.

We must not neglect all these issues. The entire Muslim world must reunite to analyse the causes of drawback and find ways to counter these issues.

The writer is a student of International Islamic University, Islamabad