US president joins 50,000 Narendra Modi supporters in Texas as thousands hold counter-protest outside the venue. 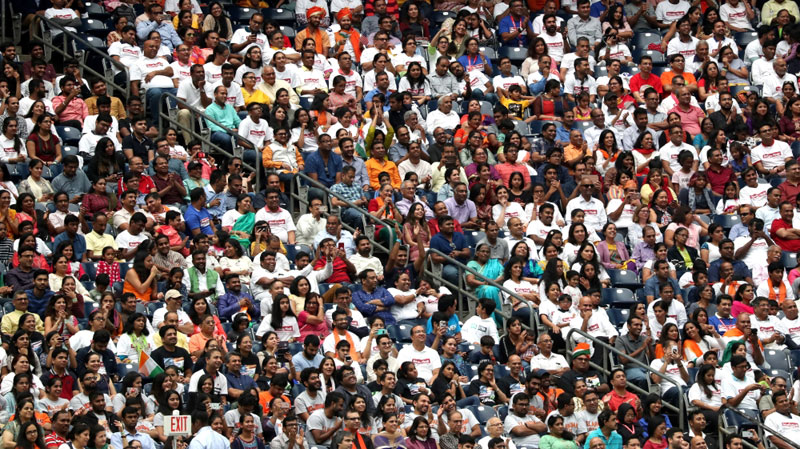 US President Donald Trump has joined a rally in Texas to welcome Indian Prime Minister Narendra Modi, who is visiting the United States – a rare mass showing for a foreign leader on the American soil despite trade tensions between the two countries.

Nearly 50,000 Indian Americans and Non-Resident Indians gathered at Houston city’s NRG Stadium on Sunday for the “Howdy, Modi!” rally hosted by Hindu nationalist Modi’s supporters in the US.

Outside the stadium, thousands of people protested against Modi over the alleged human rights violations in Indian-administered Kashmir and other places targeting India’s minorities, including Muslims, who make up about 170 million of India’s 1.3 billion population.

“Howdy, my friends,” Modi said as he began his address. “When you say ‘Howdy, Modi’, my answer is that everything is fine in India.”

With Trump watching in the front row and listening to the translation, Modi said he was “seeking equal status and development” for Kashmir, whose partial autonomy provided under Article 370 of India’s constitution was scrapped last month.

Following the revocation of Article 370, Modi’s government launched an unprecedented security clampdown on the region and arrested thousands of people, including senior politicians and activists.

Internet and mobile connections have remained suspended in the Kashmir valley since August 5, inviting criticism from the human rights groups.

“India’s decision on Article 370 has troubled some people, who can’t manage their own country,” he said in a clear reference to Pakistan, which controls part of Kashmir and has sought to rally international attention over the disputed territory.

“These people have put their hatred of India at the centre of their political agenda,” said the 69-year-old Indian leader, without naming Pakistan.

“Whether it is the 9/11 in America or 26/11 in Mumbai, where are its conspirators found? Not just you, the whole world knows who these people are.”

Osama bin Laden, who masterminded the September 11, 2001 attacks, was killed by US forces in Pakistan’s Abbottabad in 2011. The November 26, 2008 attacks in Mumbai, in which 166 people were killed, have been blamed on Pakistan-based Lashkar-e Taiba group.

Modi, Trump praise each other

At the rally in Houston, the two leaders, who call themselves nationalists and are fond of fiery rallies, heaped praise on each other in an unusual joint appearance inside the football stadium.

To the beats provided by “bhangra” drummers in saffron turbans, Trump in his dark suit and Modi in a yellow kurta and vest made a grand entrance with arms clenched together to ecstatic cheers from a crowd.

Modi said he admired Trump for his “sense of leadership” and “strong resolve to make America great again”.

“From CEO to commander-in-chief, from boardrooms to the Oval Office, from studios to the global stage…he has left a lasting impact everywhere,” Modi said, with the US president standing by his side.

Amid chants of “USA, USA” by the crowd, Trump in his address said Modi is “doing a truly exceptional job for India”.

“We are proud to have you as Americans. We thank you, we love you, and my administration is fighting for you every day,” the US leader said.

“We are committed to protect innocent civilians from radical Islamic terrorism,” said Trump, prompting a loud cheer from the audience – including Modi – who stood up from their seats.

Reporting from Houston, Al Jazeera’s Kimberly Halkett said the rally gave Modi a chance to “gloss over” the criticism his government has been facing over India’s crackdown in Muslim-majority Kashmir.

“[It’s] a chance to try and beam across the world not just in India, but in the United States and the international newspapers, and a chance to appear on stage with US President Donald Trump to gloss over much of the international criticism about his nationalist brand of politics,” she said.

Not the first rally in US

It was not the first time Modi, who heads the right-wing Bharatiya Janata Party (BJP), addressed a large crowd in the US, home to 4 million Indian Americans, including about 300,000 in Houston and nearby Dallas, according to a Pew Research Center analysis of US Census data.

Some 19,000 people turned out for a similar event in New York in 2014, and Indian American volunteers helped run a telephone blitz of voters in India in the run-up to Modi’s May reelection campaign.

Houston is a rare Democratic stronghold in Republican-dominated Texas and serves as the economic anchor of a state that will be critical to Trump’s 2020 reelection bid.

Polls show tepid support by Indian American voters, some 75 percent of whom voted for his Democratic rival, Hillary Clinton, in 2016.

Earlier on Sunday, organisers of the “Howdy, Modi!” event said Trump can expect a receptive audience.

“Trump is completely welcomed by the community,” said Preeti Dawra, a spokeswoman for the Texas India Forum that organised the event.

“His presence is an indication of his support and endorsement of the strengthening of India’s relations with America. This event is about strengthening those ties.”

India and the US have been talking for months to try to resolve trade issues.

In June, the Trump administration accused India of imposing a wide range of trade barriers, and the US ended preferential trade deals with India. In return, India levied higher import duties on US goods.

Halkett said the two leaders would share the stage “not only for the diplomatic and PR [Public Relations] aspect, but also for economics”.

“They are trying to score a trade deal in advance of the UN General Assembly,” she said.

Protest outside the venue

When Trump and Modi meet at the United Nations later this week, they are also expected to discuss the situation in Indian-administered Kashmir.

On Sunday, thousands of people gathered outside the rally’s venue in Houston to protest against the Kashmir lockdown and other allegations of human rights violations against the Modi government.

“The pluralist and secular constitution of India has repeatedly come under a grave threat by the actions of Prime Minister Modi’s government for over five years,” said Syed Afzal Ali, national vice president of the Indian American Muslim Council.

Another group, Hindus for Human Rights, said atrocities against the minorities in India could not be tolerated in the name of their faith.

“As Hindus, we feel like the atrocities happening in India … is all being done by a Hindu extremist government in the name of our beloved faith, Hinduism. It is our absolute religious, moral and human obligation to stand up and be counted on the side of history that said: ‘No, not in our name,'” said Sunita Viswanath, the co-founder of the group.

Al Jazeera’s Halkett said the presence of tens of thousands of protesters in Houston riled Modi’s supporters, who targeted the media crew at the venue.

“To give you sense of how tense things got here … our photographer got his media credentials yanked, his camera was pulled away. This [the protest] is something the organisers of the event really don’t want to have broadcast around the world,” she said.

“What they want is the appearance of Trump on stage alongside Modi. They want this diplomatic win.”