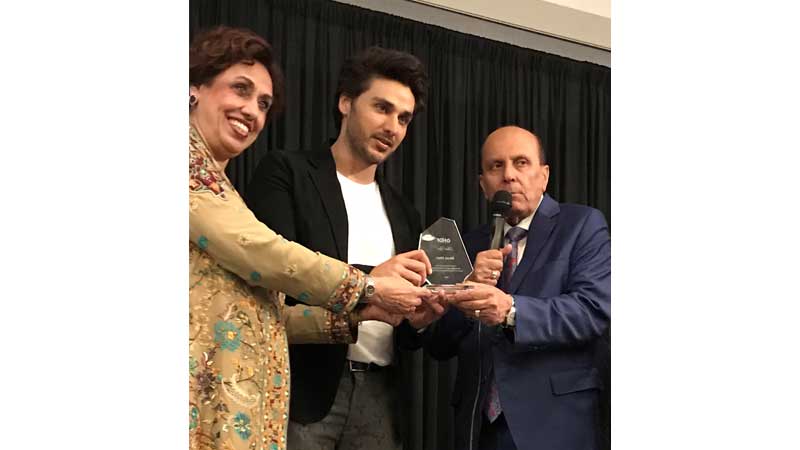 Actor and philanthropist Ahsan Khan, whose standing as an actor increasingly competes with his stature as an activist, wowed an audience of the Pakistani Diaspora at an enormously successful fundraiser organised by the Human Development Foundation in Los Angeles, California.

The talented young man used his winsome charm, palpable sincerity and disarming salesmanship to raise a huge amount of money for the organisation that supports mass literacy, quality education and universal healthcare in Pakistan.

Ahsan Khan, who had flown to Los Angeles from Karachi, to participate in the event, began his speech by talking about his unbridled love for Pakistani expatriates.

“Meeting Pakistanis living outside of Pakistan is always a veritable pleasure – one that is reinvigorating, exhilarating and, always, very rewarding,” he said. “The love that Pakistani expatriates have for their country of birth is truly amazing. It is selfless; it is genuine; and it is generous. These people – these wonderful, wonderful people – love Pakistan in the sincerest of all ways. They stand to gain nothing from the country except, perhaps, a sense of belonging, the warmth of nostalgia, and an affirmation of their intrinsic values. That is all. They are not looking for any monetary, concrete or tangible gains. They do not need the Pakistani state for financial support, jobs or security. They do not ask for administrative strength, judicial efficacy, military power or constabulary capability, for themselves. They do not personally need better governance, infrastructure and systems. Pakistan’s financial stability does not directly benefit these people. The truth is that they expect, need and want very little, if anything, from the country that they love so very dearly. Their love is truly noble; it is all about giving, and not at all about taking. And although the patriotism of all Pakistanis – those living in Pakistan and out of the country – is honourable, the nationalistic love of Pakistanis emigrants is truly extraordinary, because it is not tainted by greed, selfishness or mammonism. It truly touches my heart. I respect all of you – truly, deeply and sincerely – for the love that you have for Pakistan. ”

In a genuinely heartfelt speech, Ahsan Khan raised a number of important issues while keeping the audience entertained with jokes, anecdotes and witticisms, not to mention charming flirtations along with some singing and dancing.

“Pakistan is beset with a large number of problems today,” stated the charismatic young man. “A lot of people – including some very intelligent, some very qualified and some very learned ones – believe that the problems are not only enormously daunting, but also hopelessly insurmountable. They complain of the corruption of the politicians, the ineptitude of the bureaucracy, the bias of the judiciary, and the myopia of the clergy. They do not like the films that are produced, the television programs that are made, and the shows that are mounted. They find our literature lacking and our poetry vacuous. They are unhappy because of the filth, pollution and squalor, in our cities and towns. Dishonesty, deceit and treachery enrages them. A whole lot bothers them.

The anger of these people is largely justified, and I share most, if not all, of their concerns. I, however, vehemently and totally, reject the feelings of hopelessness, despondency and despair that often accompany their valid, if exaggerated, grievances. And, that is because I have hope for Pakistan; a whole lot of hope.”

“A well-educated, well-informed and well-read populace will not tolerate political corruption, bureaucratic ineptitude, judicial bias, and clerical myopia,” opined Ahsan Khan. “It will not watch substandard films, see poor television programs, or attend bad shows. It will ask for more from writers, intellectuals and poets. It will not allow dishonesty, deceit and treachery. And it will not accept filth, pollution and squalor, in cities and towns. It will help precipitate and ensure a successful future for Pakistan. Education is the key to a happy, healthy, successful, prosperous, peaceful, secure, fair, just, comfortable, enjoyable and progressive Pakistan!

Education secures the future of a nation. It makes the world a safer, better and more peaceful place. It allows one to transform dreams into reality. It ends dependence and reliance on others. It inculcates a sense of fairness, righteousness and equality. It allows one to make money and become prosperous. It makes one happy, content and satisfied. It fosters feelings of security, satisfaction, and fulfilment. It gives one confidence. It promotes intellectual, cognitive and emotional development. It unleashes tremendous forces of creativity, originality and imagination. It affords protection from lies, fraud and deception. It helps develop the right sensibilities to appreciate the beauty of life. It empowers one to stand up to tyranny, injustice and terrorism. And, most importantly, it helps one become a better human being, a better person of faith and a better Pakistani!”

Ahsan Khan concluded his speech, amidst thunderous applause, reiterating his belief in the power of education, and asking attendees to support the cause of education by donating generously, which they did, with great fervour, willingness and enthusiasm.

At the end of the event, well-known philanthropist and oil baron, Javaid Anwar, and the chairperson of the board of directors of the Human Development Foundation, Dr Naheed Qayyum, presented an award to Ahsan Khan, recognising his efforts in supporting the mission of the charity. The star of the evening was also given a certificate of excellence by Ahmad Zahra, on behalf of the City of Fullerton, a certificate of appreciation by Ali Sajjad Taj, on behalf of the City of Artesia and a shield by Arif Mansuri, on behalf of the Pakistani-American newspaper Pakistan Link.

The writer Tweets @allyadnan and can be reached at allyadnan@outlook.com