* The book mainly discusses the geography, adaptability to the prevailed conditions and the ideas and imaginations related to these conditions 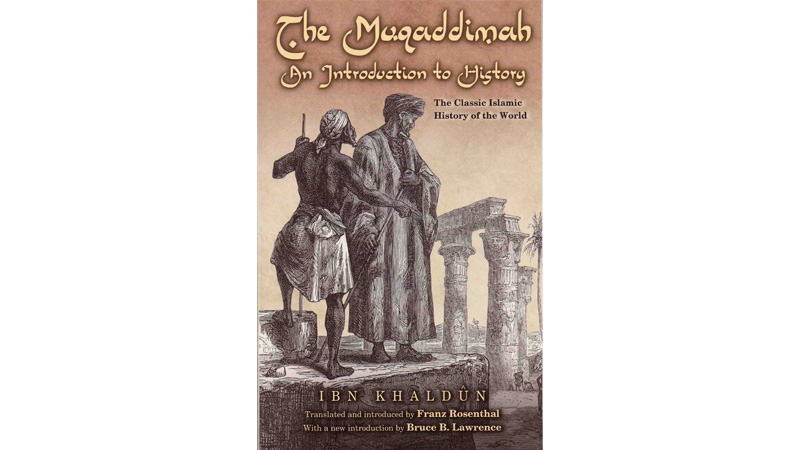 The Muqaddimah is an introduction of Kitabul Ibar written by Ibn Khaldun and translated by Franz Rosenthal.

Ibn Khaldun has been a philosopher, historian, sociologist, economist, historiographer and jurist. This book consists of six chapters with that of concluding remarks.

The book mainly discusses the geography, adaptability to the prevailed conditions and the ideas and imaginations related to these conditions.

The Muqaddimah is not a narrating account of history. Contrast to it, it explains the evolution of states and societies, rise and fall of dynastic rule, transformation of nomadic life into sedentary one and various means, methods and ways of making living etc. Ibn Khaldun’s questions are concerned with causation that has made this work rational and scientific.

The authors states that man has been rewarded with the thinking ability. This thinking ability not only distinguishes him from animals but also enables him to defend one’s vulnerability, to adjust oneself to circumstances, to earn livelihood, to cooperate the other fellow beings and so on.

Narrating the scientific nature of history, Ibn Khaldun is of the view that historical accounts consists of the sources (raw material) and speculative mind to reach to truth. He adds that the earlier historians like al-Masudi and al-Tabari have transmitted the story in plain form as was received. These stories were accepted without critical investigation and consequently crept through the historical work. According to the author, the critical evaluation of the historical account helps in distinguishing the truth from falsehood.

Being scientific Ibn Khaldun’s approach towards history writing is anthropocentric rather than theocentric. He imparts rational explanation of the origin and evolution of society and civilisation. Moreover, he also answers that why group feeling or asabiyyahis stronger in nomadic cultures than that of sedentary cultures. Though he is anthropocentric, he also gives the explanation of ’cause beyond the cause’. This is substantiated from Ibn Khaldun’s persistent repetition of the phrase ‘Gods know better’ and ‘Gods gives success’ in The Muqaddimah.

Ibn Khaldun explains the importance of geography in moulding the lifestyle and behavior of the people. He divides the earth into seven zones of temperate and intemperate nature. The respective zones have relative effect on the food, clothing, housing, craft, skin, body and other characteristics of general conditions.

The author of The Muqaddimah states that to distinguished environmental conditions people respond differently. The most important thing is that individuals develop social organizations. These social organizations help to adapt the inhabitants with the geography and conditions of that particular area. Nomadic and sedentary cultures are the two important responses in this regard. Royal authority, dynasty, caliphate and government etc. are others. In nomadic life, they depend on bare necessities. Once their substantial level intensifies, then they transform to sedentary life. They earn more and live more comfortably than that of Bedouins. In the evolution process, the Bedouin stage comes first than that sedentary stage. In the former stage, people have personal and closed contacts and group feeling is high. Whereas, in the latter stage, the numerical strength intensifies and this diminishes the group feelings. Therefore, the origin of the Royal Authority emerges. This royal authority designs laws that are applicable to all people. This royal authority establishes large cities and large monuments. The large cities crumble when the royal dynasty crumbles. The royal authority crumbles only when it lacks group feeling or that of gets entangled in luxury and extravagances.

The Muqaddimah is not a narrating account of history. Contrast to it, it explains the evolution of states and societies, rise and fall of dynastic rule, transformation of nomadic life into sedentary one and various means, methods and ways of making living etc. Ibn Khaldun’s questions are concerned with causation that has made this work rational and scientific

Ibn Khaldun adds that the group feeling acquired through the help of religion is more influential than that of the blood relations in larger societies. This can be substantiated by the fact that what happened to Arabs at the advent of Islam? In similar connotation, in the battle of Qadisiya and Yarmuk the troops of Persian army and that of Heraclius were defeated by Muslims respectively.

The author of The Muqaddimah states that the life span of dynasty is almost 120 years with some exceptions. The first generation of the dynasty retains the desert toughness and savagery. The second generation is transformation from desert traits to sedentary one and addition of relaxation, facility and luxury in their life style. The third generation establishes royal authority without any sacrifice. This undermines the strength of dynasty. Moreover, the rise and fall of dynasty moves in a cyclical way. In the first stage, the dynasty overthrows all oppositions. In the second stage, it establishes control over the people. In the third stage, leisure and tranquility comes. In the fourth stage, contentment and peacefulness comes. And in the fifth stage, waste and squandering occurs and dynasty fall. When the dynasty is on the route to fall then new dynasties originate by two ways. One, the governors takes the control of the peripheries. Two, the dynasty with stronger group feelings comes to establish the rule.

Critically looking to this work, it can be deduced that this work is related to the historical account of dynastic rule going on in Africa, Middle East, Asia and mostly Muslim caliphate. Though he has discussed the European Christians but still The Muqaddimah reflects that he had no knowledge of the other parts and continents of the world. So, in geographical context, he had restricted knowledge. Along with Ibn Khaldun’s limited knowledge of geography, his cyclical theory of rise and fall can be applied well to dynastic states and caliphates but not that of nation states.

In a nut shell, The Muqaddimah written seven centuries back, still has relevancy in contemporary world. His scientific methods of writing history and analysing the earlier historical account critically are important for today’s historians.

The writer is a freelancer and a columnist. He Tweets at @anwar_yakhail and can be reached at [email protected]