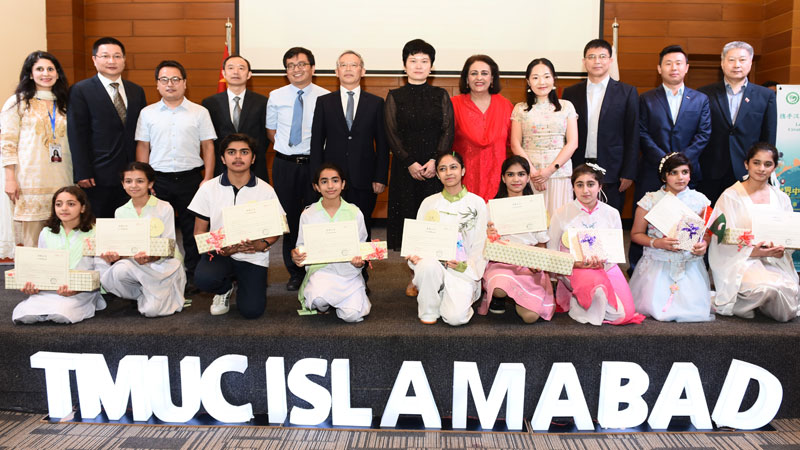 The Roots Millennium Education in collaboration with China Radio International (CRI) and Embassy of People’s Republic of China organised Chinese Proficiency Competition for Secondary School Students (Chinese Bridge)at TMUC Auditorium, according to a press release issued by the organisation.

The competition started with a welcome speech by The Millennium Education Chief Executive Chaudhary Faisal Mushtaq who said that cultural exchange programs has not only strengthened the relationship between Pakistan and China but has also enabled the youth to inherit, sustain and transmit the legacy of Pakistan-China friendship. He said that CRI-Millennium Confucius Classroom is a step forward towards China-Pakistan Education Corridor in the larger prospect of CPEC. He said that people-to-people exchanges are the salient feature of Pak-China bilateral ties and CRI Millennium Classroom has immensely contributed towards it through different cultural activities and competitions.

Speaking to Millennials, Deputy Chief of Mission at the Embassy of People’s Republic of China Pang Chunxue appreciated the efforts put in by the students and faculty for the competition and said that language plays a pivotal role in knowing a nation and its culture. She emphasized that China and Pakistan are very good friends and neighbours. She said that CRI-Millennium Confucius Classroom has made an exceptional attempt and the initiative will produce tangible results in future.

The CRI-Millennium Confucius Classroom offers Chinese language classes across the Roots Millennium Education Pakistan in the private sector with an aim to allowing the students to become linguistically literate and culturally competent. The Millennium Chinese language department has now 18full-time teachers and nearly 9,500 students learning Chinese language. This initiative has also helped promote cultural, social, business and educational opportunities among China and Pakistan for the benefit of the future generations.